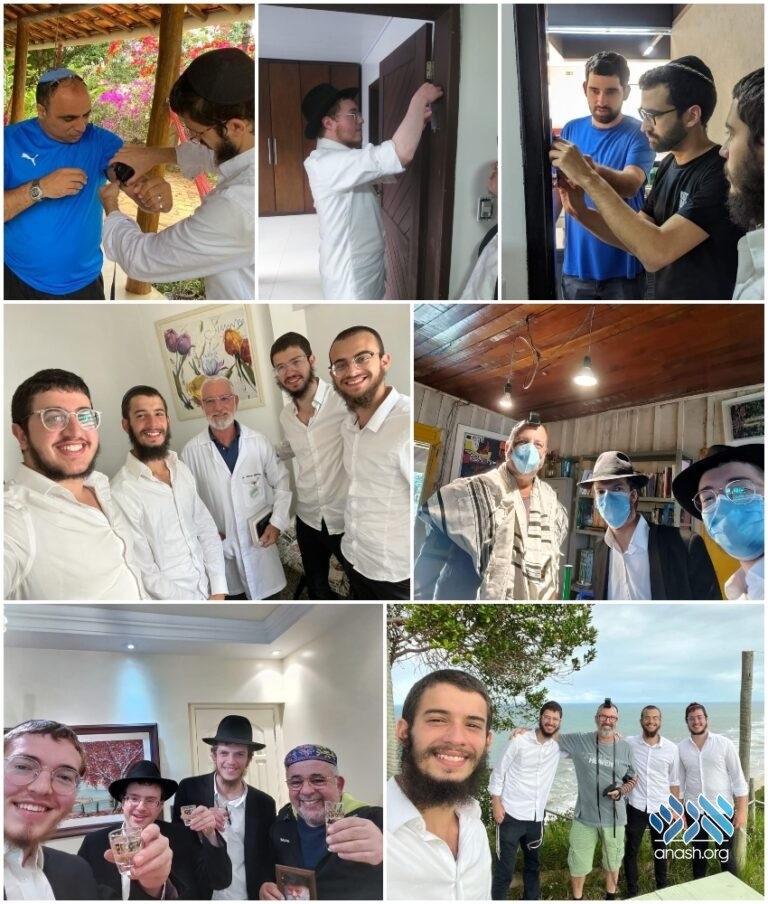 During the summer weeks, groups of Brazilian bochurim traveled over 9.600 miles, visiting Yidden in far-flung corners of the country. Often these conversations are their only source of connection to Yiddishkeit.

“There is no Jew too far away” is an axiom taken literally by nine Brazilian Yeshiva students.

During the summer weeks, groups of Brazilian bochurim traveled over 9.600 miles, visiting Yidden in all corners of the country. From Jaguarão-RS corner with Uruguay to Lençóis-BA in the northern side, from the western city of Uruguaiana to the Eastern Vitória.

Divided into three separate groups, through the two months of the summer vacation, the bochurim dedicated themselves to inspiring Jewish people with visits to their homes and offices, sharing some words of Torah, laying Tefilin, affixing or checking the Mezuzes wand whatever else needed.

Messages of Jewish pride, strength in Yiddishkeit, and the importance of the Jewish heritage were conveyed to hundreds of Yidden. Often these conversations are their only source of connection to Yiddishkeit.

Events, Shiurim, Kabalos & Seudas Shabbos, Mega Challah Bake, Q&A’s sessions, Havdalah with Chassidic Nigunim, and much more was part of the creativity used throughout the trip; many of the attendants had the pleasure of participating in the first of its kind, and the impact pushed the small communities to organize their own activities throughout the year.

“Thank you very much for the visit, I now had gained my year, appreciate the love and caring; I received two books and a lovely picture of the Rebbe,” said Claudia after the boy’s visit.

Now, after such a long and affecting trip, the project is only beginning, by continuously keeping in touch with the Yiden and the small communities, providing them with their needs throughout the year. Chanukah Boxes and Shmurah Matzah are shipped across the country, and on special dates, Bochurim and Rabbis visit one of those cities, for Rosh Hashanah and Yom Kippur, Purim and Chanukah and for the Pesach Seder.

The Project Mitzva Tank Brazil is managed from A to Z by the young volunteering Bochurim, alongside help from various Shluchim of different areas.

One story that happened this year showed us the long-lasting of their work,” the Bochurim related. “Not long before the South Route left, they received a pair of Tefillin from an elderly Holocaust survivor, who wanted that the pair should go to someone who would commit do during the Mitzvah every day.”

“One bury Friday as we were preparing for a Kabalat and Seudat Shabat, in the city of Ponta Grossa, two bochurim went to do a home visit. Samuel is a Yid that unfortunately has a very hard life, from his financial conditions to his family. Our visit was very important to him so we arranged to meet him in his booth in the main street, where he sells soccer team shirts.

“Samuel told us how things are going and some of the harsh stories he lives through, as the conversation went on he mentioned that he would be happy to start putting on the Tefillin every day.

“We had exactly what he wanted, without thinking too much he opened his wallet as said here is everything I have, I want to buy this pair; we taught him how to do it, and from that Friday and on he puts on every day

But the story doesn’t end here. the father of one of the Bochurim, Rabbi Yossi Alpern, Shliach in S. Paulo, mention this story at his Shabbos table, and one of the men present at the moment, stunned by this man’s life story and how he is able to commit for such a thing even living in a small town, he then decided that he could also change and do something more, so he took upon himself that he would also put on Tefillin every day,

Samuel after hearing the impact he had on others said“I was very happy to know that I positively influenced the life of a person practicing a great Mitzvah of putting on Tefillin, I am even happier to know that I have the affection and caring of you, I feel very comfortable knowing that I can count on you in my mission as a Jew here; when you mentioned that someone will put Tefillin every day, I felt like a flame that brought light to someone’s life, I’m feeling an immense happiness.”

This is not the only one, a man already decided to have a Bris Milah, some kids will join summer camps, and many more stories that are broiling.

Donations can be made to PayPal.me/MitzvaTank.