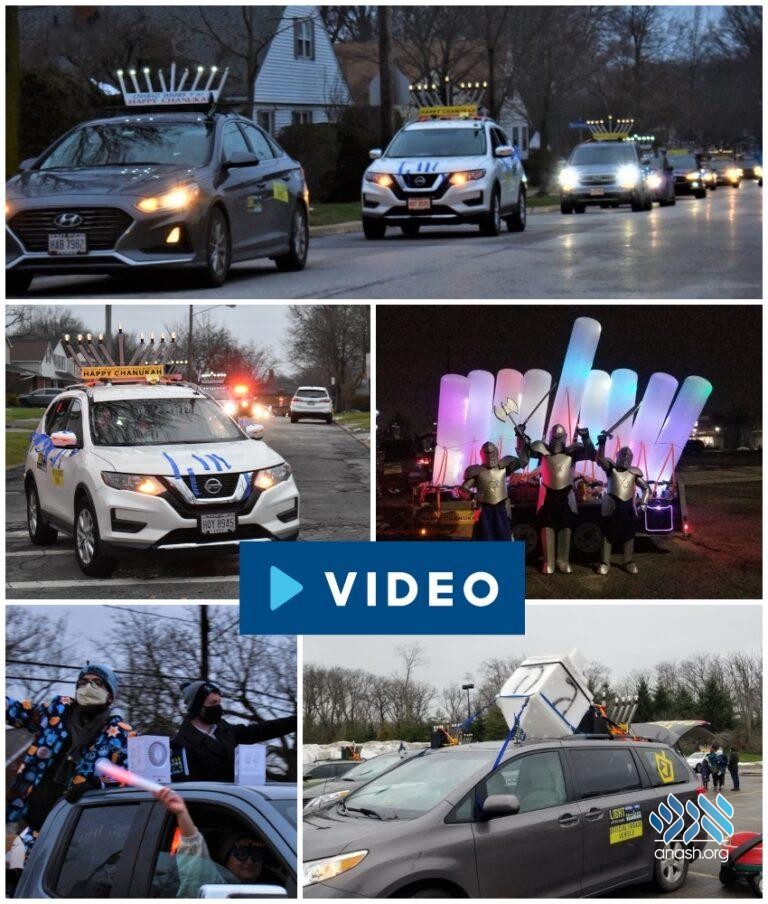 Three local mayors joined Cleveland’s Light After Dark Menorah Parade traveling for more than 22 miles and through 4 cities, including one where Jews were once banned.

For the 9th year, residents of Cleveland, Ohio were treated to a spectacular Menorah parade and show, featuring a LED inflatable Menorah float, bubble trucks, and authentic Maccabees handing out Chanukah treats to all.

The Light After Dark Menorah Parade was a community-wide unity event organized by #ElevatingCLE, The Niggun Minyan, and Downtown Chabad, and the Bulua family. The Parade traveled through 4 cities and for more than 22 miles with menorah cars, floats, and Chanukah music to brighten Cleveland souls with the Chanukah lights.

Joining the parade were Mayors Jason Stein of Cleveland Heights, and Martin Horwitz of Beachwood, while Mayor Michael Dylan Brennan of University Heights came out to wave them on.

Shaker Heights, one of the cities the parade traveled through, used to not allow Jews to buy homes in the city, until as late as the 1960s.

Many people waited out in the cold under blankets along the streets as we came through. Amazing volunteers, some dressed as Maccabees and Dr. Dreidel tossed out Chanukah goodies along the way to children, and children at heart.

“What made it the most special was seeing thousands of people come out safely, without congregating, along the entire route,” an organizer said. “Even more people waved from windows. There were people camped out on their driveway’s with blankets anxiously awaiting the parade. It was really special to see yidden from across our entire wider Jewish community come out, from people who are not yet affiliated to the most yeshivish and chasidish. It was truly humbling and special. The parade itself was made up of a similarly diverse demographic.”

Organizers expressed thanks to the Cuyahoga County Sheriff Parade Unit led by Captain Bill Welsh, and Deputies Herrera, Baez, and Joyce, for leading the Parade so safely and professionally. And to the Cleveland Heights Police and University Heights Police Department for their assistance. And a special thanks to the volunteers, sponsors, participants, and all those who braved the cold to join.