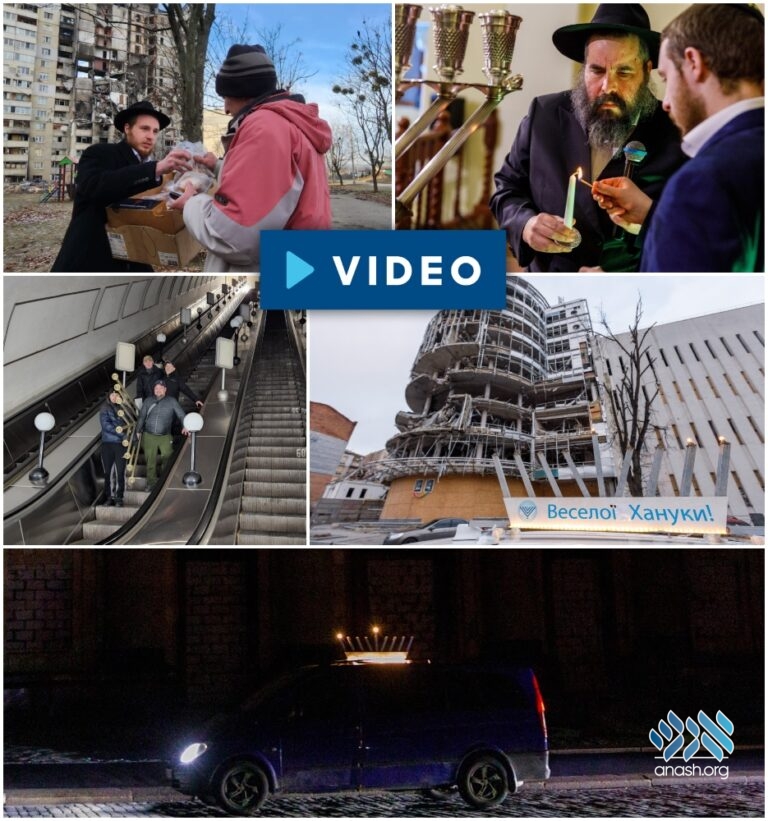 Despite much of the city remaining without electricity, and many building being bombed-out, the shluchim to Kharkiv spent Chanukah spreading light and joy to every Jew in the city.

Friday, December 16th, ten rockets hit Kharkiv, Ukraine knocking out the electricity throughout the city. The subway station is closed and empty. Except for those in Kharkiv who are thinking about Chanukah. The subway stations in Kharkiv were home to over 15,000 people for months of the war. Now a menorah was being carried down the large escalator to get ready for the first day of Chanukah.

Throughout Chanukah around the menorah in the subway there is now dancing, doughnuts and menorahs being given out. The menorah shines underground as a symbol of light, hope and miracles.

Sunday, the first night of Chanukah, hundreds of young and old started streaming into the shul on Pushkinskaya Street, making doughnuts, candles, playing dreidel, getting a menorah and putting on tefillin as if there was no war going on. As Rabbi Moshe Moskovitz, Chief Rabbi and shliach in Kharkiv told the crowd emotionally, “The Rebbe taught us that especially in these times when there is so much darkness around, we have to add light and help others. Especially in this year of Hakhel we gather strength by uniting together. The fact that so many people have gathered today to celebrate in Kharkiv despite all – shows our determination to continue and to grow together.”

As Yossi Moskovitz sang “Nyet Nyet Nikavo”(I am not afraid of anything except Hashem alone) the crowd joined in, taking the words to heart.

Large menorahs were placed in three big shopping malls that were bombed and shelled during the war. Another menorah stands outside the Barabashova market that rockets hit numerous times. Another menorah is shining brightly on Sumskaya street just a few meters from the Governor’s Building on the main square that was destroyed on the first days of the strikes on Kharkiv.

A menorah parade throughout the streets of Kharkov shared Chanukah’s message of light and hope.

Mr. Igor Terechov, the mayor of Kharkiv, joined for the lighting on the third night of Chanukah. Emotionally he said, “In homes throughout Kharkiv the Chanukah candles are being lit giving us all hope. Light always wins over darkness! I wish us all that next Chanukah we will celebrate in peace in Kharkiv!”

The Jewish community distributed thousands of food packages, blankets and heaters and Chanukah packages to homes throughout the city. Despite the dangers, the shluchim went from home to home to light menorahs in all corners of the city.

Hundreds of menorahs were given out on mivtzoyim at all the malls and subway station. Rabbi Chaim Levinson together with the bochrim Levi Yitzchok Levinson and Shmuel Aizik Raices kept busy with mivtzoyim throughout Chanukah.

This year when there is no electricity in the city and in many homes the Chanukah menorah is the only light in their house, the Jews in Kharkiv are praying together with all of Ukraine that there should be miracles now, “in those days, in these times.”

Click here to see a video of Chanukah in Kharkiv.