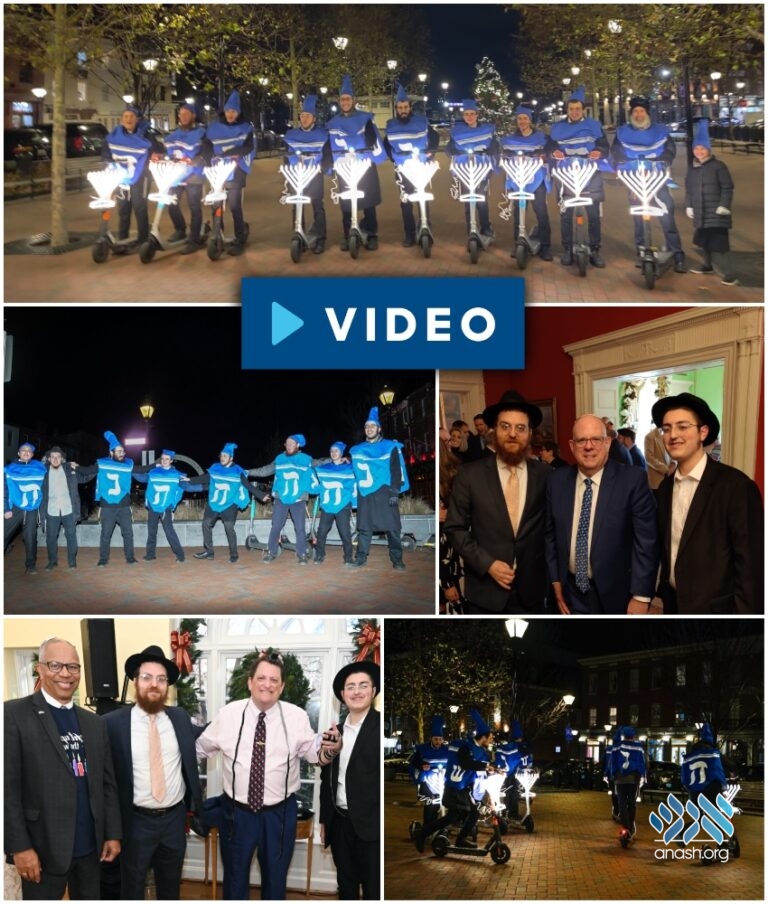 25 Menorah and Dreidel Scooters mounted with LED lights brought the joy and message of Chanuka to hundreds of passersby who were walking downtown Baltimore’s promenade and frequenting its shops and nightlife.

Students at Yeshivas Lubavitch of Baltimore held a Chanuka Scooter Parade downtown on the first night of Chanuka. The Parade departed from Broadway Square in Fells Point riding to the Inner Harbor and culminating in a Menorah lighting outside of the Chabad House of Downtown.

Riders were dressed in Dreidel Costumes and the scooters were mounted with LED Menorahs bringing the joy and message of Chanukah to hundreds of passersby who were walking downtown’s promenade and frequenting its shops and nightlife.

The parade concluded at the Chabad House of Downtown in Baltimore’s Little Italy neighborhood with the lighting of a truck-mounted menorah and some holiday refreshments.

“Everyone is especially excited about Chanukah this year,” said Leible Druk, 17, a student at the Yeshiva and a native of downtown Baltimore. “The public Chanukah celebration is about sharing this light and joy with the broader community and the entire of Baltimore.

While Baltimore has enjoyed a Chanukah Vehicle Parade, organized by Chabad of Park Heights and the JUSA center for many years, the Scooter Parade is a new innovative addition and, according to the participants, a very fun way to celebrate. The yeshiva students also distributed dozens of Menorah kits to Jews they met on the street and who joined them for dancing and watching the parade.

The public Chanukah celebration is also being heralded as a response to the worrisome rise in anti-Semitic rhetoric online and elsewhere.

“Our response to hatred of any kind must never be to cower or hide our faith,” said Druk, who raised the funds and organized the parade. “The story of Chanukah is the tremendous power of light to overcome darkness. We can have no better response to the negativity we encounter than to gather together in even greater numbers and celebrate the light of the Menorah in public.”