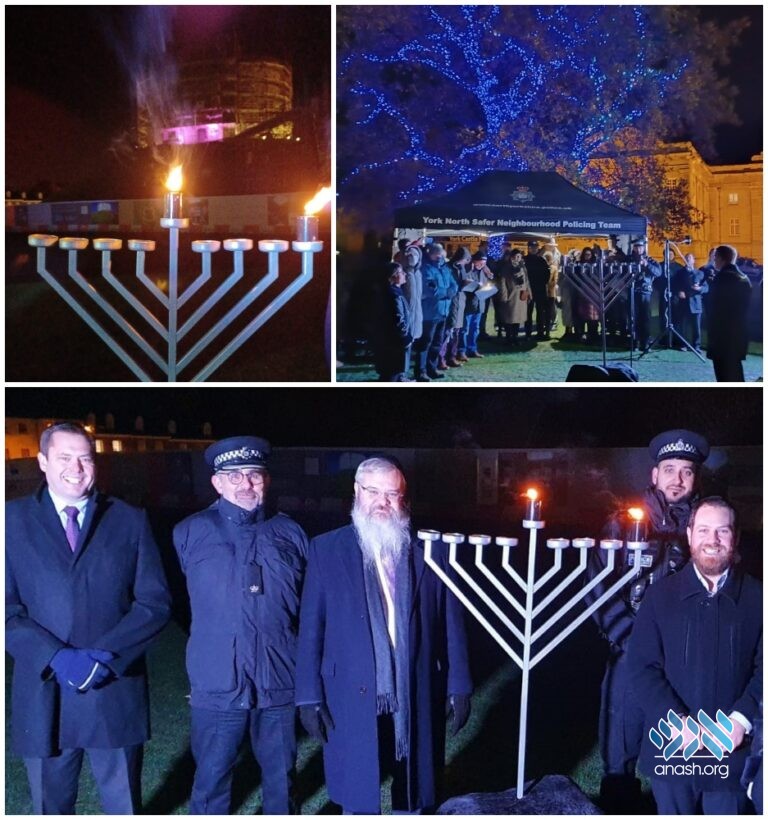 For the first time ever, a public Menorah has been lit at the infamous Clifford’s Tower in York, England, home to the worst anti-Semitic massacre on British soil. The event was spearheaded by Lubavitcher Police Officer Moshe Rothstein.

For the first time ever, a public Menorah has been lit at the infamous Clifford’s Tower in York, England, home to the worst anti-Semitic massacre on British soil.

Clifford’s Tower was the site of one of the worst anti-Semitic massacres in England during the Middle Ages. In 1190 the city’s entire Jewish Community was trapped by an angry mob inside the tower at the castle. Many members of the community chose to commit suicide rather than be murdered or forcibly baptized.

The present tower was built 60 years after the massacre, but it’s possible that the earth mound may still contain evidence from 1190. Every year, on the anniversary of the massacre, a memorial service is held which includes the planting of daffodils – whose six-pointed shape echo the Magen David.

The event was spearheaded by Lubavitcher Police Officer Moshe Rothstein, who has been using his position to initiate multiple Menorah lightings with various different Police forces, spreading the message of Chanukah to both Jewish officers and also their non Jewish counterparts.

Special Inspector Rothstein travelled from Manchester for this historic event, together with Shliach Rabbi Daniel Walker, Rabbi of Heaton Park Shul in Manchester.

“We wanted to mark Hanukkah as part of our commitment to being a more inclusive organisation and having a deeper understanding of all the communities we serve,” he said. “The location was very poignant, because although it’s easy to say the atrocities that happened there are in the past, we know that hate crimes are very real in today’s society, and people are still being targeted for their race, religion or beliefs. This will not be tolerated, and I want to send a clear message that we are here for everyone and no matter who you are or what your belief is, we will work hard to make sure you are safe in the city”.

Special Inspector Moshe Rothstein said “When the candles were kindled, I couldn’t help but think deeply of all those Jewish victims who seemed to have lost hope and now, all those years later we have lit up the city of York with these beautiful [menorah] kindled, spreading goodness & kindness for a brighter tomorrow.”