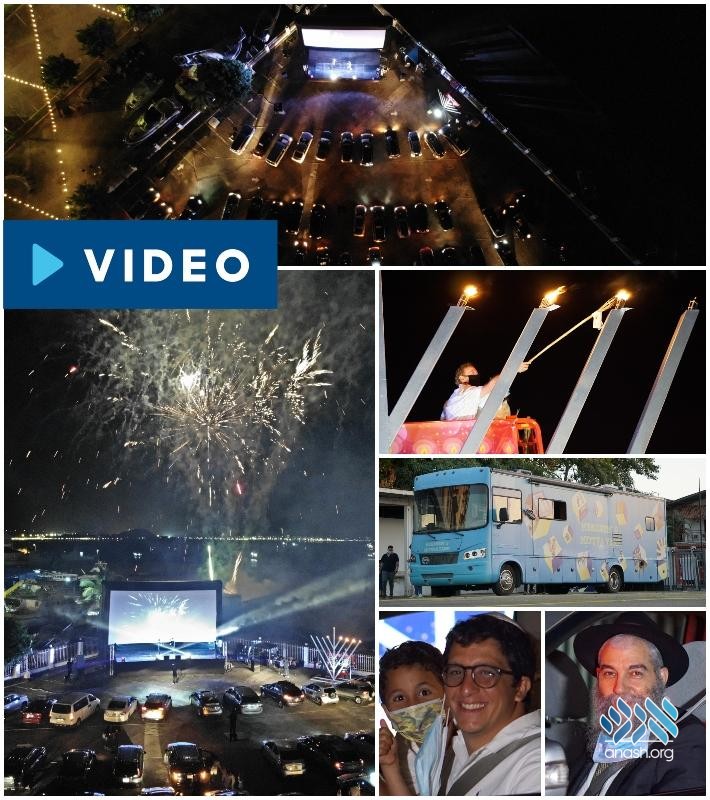 This Chanukah, Panama City was light up by a beautiful drive-in event organized by the new institution “Mitzva Tank Panama,” led by shliach Rabbi Shlomo and Esther Kamhaji (Poliwoda).

This Chanukah, Panama City was light up by a beautiful event organized by the new institution “Mitzva Tank Panama,” led by shliach Rabbi Shlomo Poliwoda and Esther Kamhaji (Poliwoda).

For over 7 years, Panama City featured a large Chanukah parade, and the shluchim weren’t going to let this year be an exception. In fact, it was probably the only Chanukah activity that would happen outside of the “virtual reality” in the country.

Rabbi Polwoda says that the idea of re-creating an auto-cinema just came to his mind when suddenly news came out that such a place has just opened its doors to the public. “What an Hashgacha protis!” he said.

After months of work, the event came about, overcoming many obstacles, potential re-closures of the country and a host of other challenges that could have stopped the event. Boruch Hashem, over 70 cars attended the event, totaling an approximate of 300-400 attendees.

Covid-19 care measures were taken, people even had the choice to listen to the live audio or to tune in the same content without delay on a radio Station. People were greeted with pictures, event car-flags, light sticks, sufganiyot, pop-corn and they could even order food to their cars. Everybody had to R.S.V.P on a form, while choosing their numerated spots on the public lighting.

The event featured interactive games with the presenter Sacky DeLarosa, and participants also enjoyed a couple stories related to the topic of the event related by local shluchim Rabbi Gabriel Benhayon, shliach to Panama City, and Rabbi Yaacov Poliwoda, shliach to Boquete.

The video segment of the evening was finalized by an excerpt from the famous speech delivered by the late Chief Rabbi Jonathan Sacks Z”L, following which attendees enjoyed a beautiful concert by singers Aby & Eli.

Finally, the Menorah was lit. The first candle was kindled by the Head Shliach Rabbi Aaron Laine, followed by Shliach Shlomo Poliwoda, the Bresler-Beckerman Family, Dornbusch Family and 3 CTeen teenagers.

The CTeen volunteers also took another big part in the event, with all the food organization being arranged by them, as well as traffic arrangements, led by teens Alan Burakoff and Ariel Felsenstein Cteen Leaders.

Before leaving, everybody enjoyed a beautiful firework show, leaving everybody uplifted and ready to spread the light!