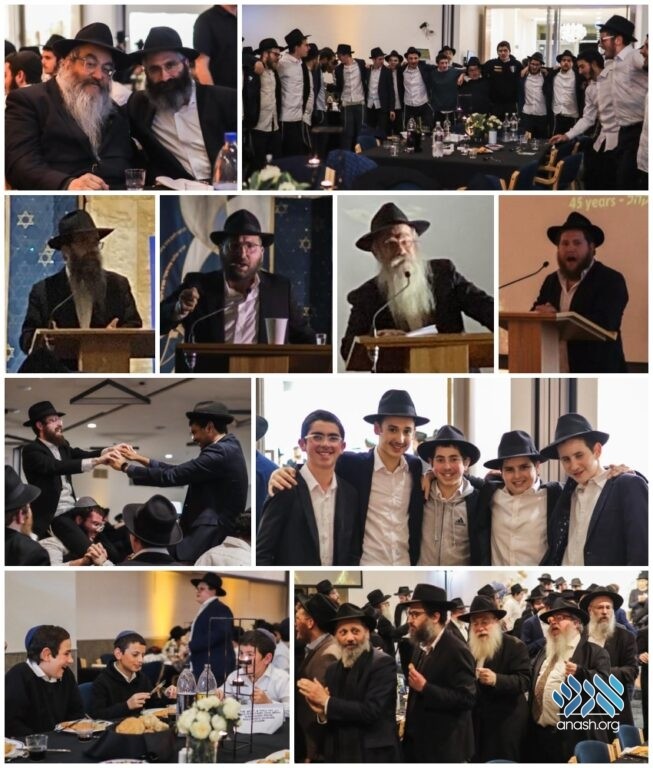 In an unprecedented show of unity, over 300 men, bochurim, and young boys of the Melbourne Anash kehillah turned out for a community-wide celebration commemorating 45 years since Rosh Chodesh Kislev 5738.

In an unprecedented show of unity, in honor of Shnas Hakhel, over 300 men, bochurim and young boys of the Melbourne Anash kehillah turned out Thursday night for a community-wide celebration commemorating 45 years since Rosh Chodesh Kislev 5738.

The Talmidim Hashluchim to Melbourne arrived from foreign shores mere weeks ago, but they started off with a bang. “If we want our children to feel like Rosh Chodesh Kislev is a day that they have a connection to, a day that they can personally celebrate, they must see the same in their parents, siblings, educators etc.” remarked one of the event’s organizers. “They have to understand that this is something that touches the inner core of every Chossid in Dor Hashvi’I, them included. This is what really drove me to make this happen.”

For weeks prior, this year’s record-breaking group of 26 shluchim to Melbourne – to Yeshivah College, the Yeshivah Gedolah and Cheder Levi Yitzchok – worked hand-in-hand to put together the various logistical and programming elements of the evening. The event was also financially supported by all of the different Chabad mosdos in Melbourne.

Thursday evening, approaching 8 o’clock, people began rolling in to the sprawling Hamerkaz Centre, and took their seats in the beautifully-set function hall to start enjoying the first course. The banquet began with an introduction by MC Binyamin Plotkin, shliach to Yeshivah College, followed by a recitation of the Rebbe’s Kapitel, led by shliach to Yeshivah Gedolah Zalmy Hirsch.

The night continued with an intricate program, complete with personal testimonies and corresponding video presentations, painting a picture of the entire story – starting from the heart attack on Shemini Atzeres, all the way through the Rebbe’s miraculous recovery and homecoming on Rosh Chodesh Kislev.

Four members of Melbourne Anash recounted some of their own specific memories of the time – Rabbi Pinchos Ash, one of the few individuals who remained in 770 after the heart attack and were privy to some otherwise unknown parts of the story, Rabbi Leibel Raskin, who continued the story from Simchas Torah and on, Rabbi Mendel Kaminetsky, who gave over the atmosphere that existed in 770 in the ensuing weeks, and finally Rabbi Mendel Lipskier, who recounted his own memories from a young child’s perspective, including various effects of the story that continued months and even years following 5738.

Throughout the speakers were dispersed short video clips pertaining to that period from 5738, including the famous sicha that the Rebbe spoke on Motzaei Simchas Torah from his room, the first of many of the unique style of farbrengens from that period that were able to be recorded and heard till today.

Following the story, young and old rose for exuberant dancing, expressing our thanks to Hashem for the miracle and our joy that ‘der Rebbe iz gezunt!’

After everyone settled back in their seats, the MC introduced the climax of the night – an enthralling and compelling keynote address by R’ Reuven Pinson. Rabbi Pinson drew a parallel between Chassidim in the Soviet Union – who went on mesirus nefesh despite never having seen the Rebbe, solely thanks to hearing one account of something the Rebbe did – to our current situation where we cannot see the Rebbe physically, the difference however being that we now have the Rebbe through the Torah that the Rebbe gave us, and this gives us the koach to continue being ‘gezunte Chassidim’, thereby ensuring that ‘der Rebbe iz gezunt’ here and now!

The speech was followed by bentching, maariv and farbrengens till the wee hours of the morning. All participants went home feeling the chayus of Rosh Chodesh Kislev, and its relevance to each and every Chossid wherever and whenever he finds himself.

Thank you to all of the following that made this event possible:

Thank you to our partner in the evening Rabbi Shlomie Mochkin, who generously sponsored in honor of Rabbi Yehuda Leib Mochkin.

Thank you to all of the Mosdos in Melbourne who came together in a Hakhel-inspired achdus to support the event: Yeshivah Shule, Young Yeshivah, Chabad Youth, Yeshivah College, Yeshivah Gedolah, Cheder Levi Yitzchok and Kollel Menachem.

Thank you to Rabbi Motty Liberow of Hamerkaz for so graciously hosting the banquet.

Thank you to Mordy Adelist for providing the musical entertainment.