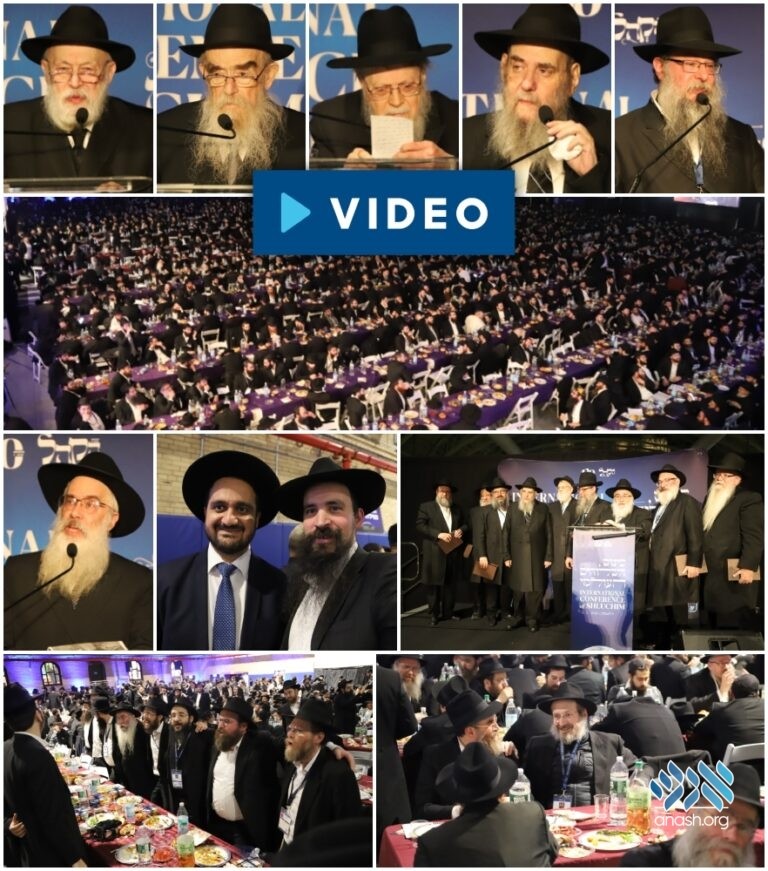 A huge crowd of shluchim filled the Bedford Armory on Motzei Shabbos for a grand Melave Malka and general session, addressed by Rabbis Yehuda Krinsky, Avrohom Shemtov, Moshe Kotlarsky and others, alongside special video presentations.

A huge crowd of shluchim filled the recently renovated Bedford Armory on Motzei Shabbos for a grand Melave Malka and general session of the Kinus Hashluchim 5783.

The theme of the Melave Malka was a unique twist on Hakhel: Gathering all segments of the Jewish people, no matter their label or official title.

Chairing the General Session was veteran shliach to Yerushalayaim Rabbi Naftoli Roth, who has served as the emcee for many a Chabad event over the decades. He introduced each speaker in his classic warm fashion, and blessed the crowd of shluchim with birkas kohanim.

First to address the shluchim was Harav Avrohom Osdoba, member of the Crown Heights, delivered a dvar Torah and a bracha on behalf of the community to the shluchim and to Rabbi Moshe Kotlarsky.

Rabbi Yehuda Krinsky, Chairman of Merkos L’inyonei Chinuch and mazkir of the Rebbe, spoke next, recalling hora’as of the Rebbe to the shluchim, including making sure to have their books in order and directives for Chanukah mivtzoim. He also issued a call to expand 770, asking for the shluchim’s help.

Rabbi Avrohom Shemtov, Chairman of Agudas Chassidei Chabad then spoke briefly before bursting into a hearty rendition of the hakafos niggun.

Special video presentations were then shown where shluchim Rabbi Shmuel Lew of London, Rabbi Sholom Ber Levitin of Seattle, Rabbi She Hecht of New Haven, Connecticut and Rabbi Levi Fogelman of Natik, Massachusetts. Each shared a story of how they achieved unity with another type of Yid, ranging from a Litvishe rov to the head of the Reform Movement.

Rabbi Moshe Kotlarsky, Chairman of the Kinus, Colombia Shliach Rabbi Yehoshua Rosenfeld and Rishon L’tzyon Shliach Rabbi Schneur Ashkenazi spoke in person, each with a personal and inspirational message to the shluchim.

Rabbi Kotlarsky also called up the Vaad of the Kinus to present them with a token of appreciation for their endless work to make the Kinus happen each year.

After the shluchim stood up to join a lively dance, the Melave Malka concluded with Rabbi Lipa Brennan, coordinator of the Kinus Hashluchim since its inception in Kislev of 5744, giving Rabbi Kotlarsky a heartfelt bracha.