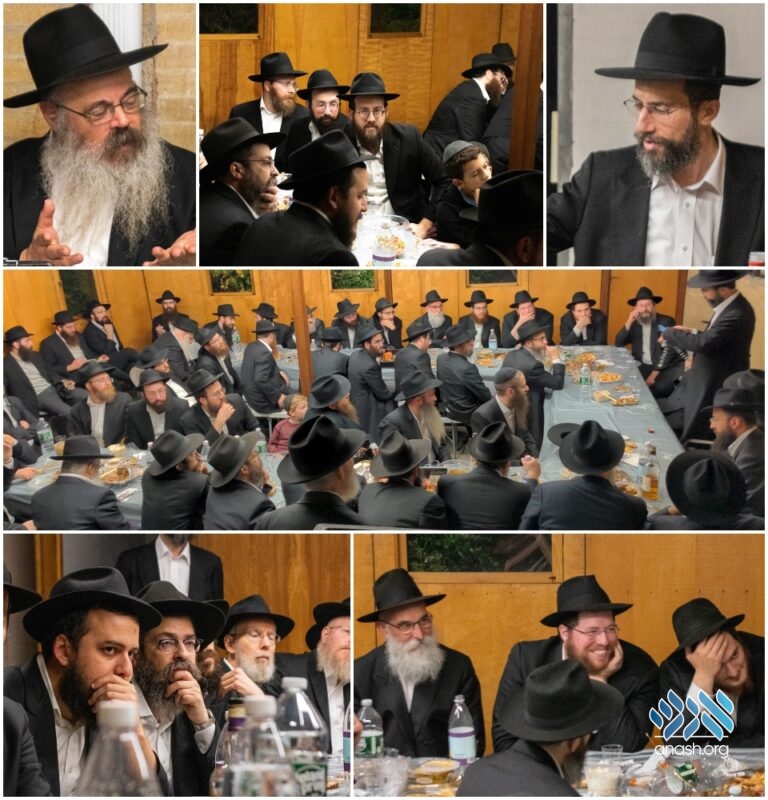 The mechanchim gathered round the festive set tables, enjoying the extra bountiful delicacies ordered in honor of Hakhel. This year’s event had a beautiful turnout, with the uniqueness of many new faces, including numerous celebrated mechanchim. They had come to Crown Heights for Tishrei, of this Hakhel year. Indeed a palpable Hakhel spirit of joyful togetherness resonated with the large crowd, spanning menahalim and Teachers from far and near.

Rabbi Groner, a Chinch expert of over 40 years, enthralled the crowd with many chinuch anecdotes, relating many stories and horaos. He shared many stories from his illustrious father, Rabbi Leibel Groner z”l, and memories of the chinuch of yesteryear, recounting stories in his inimitably warm and charismatic style.

His inspiring messaging was interwoven with fascinating personal stories that captivated the mechanchim until way after midnight. Among the potent messages he shared were, “Don’t break the enthusiasm!” – expanding on how to channel young enthusiasm. He also spoke about “A different look,” how the Rebbe once commented on a list of tough boys handed in by a yeshiva. “Most, perhaps all, are precious of precious יקרים שביקרים! They just require the right approach.”

Rabbi Zev Weinstein, mechanech in Oholei Torah, related how one message of Rabbi Groner especially empowered him with a resounding take-away message: Don’t undermine yourself!  The Rav of Kfar Chabad, Rav Gorelick a”h, once arrived at the Rebbe, and when R’ Leibel Groner announced his presence, Rav Gorelick commented on himself  “Kfar Chabad could use someone better,” to which the Rebbe immediately replied: בך הדבר תלוי! You be that one!!

The mechanchim left the event, deeply inspired and enthused.

Rabbi Hendel Serebranski, a mechanech hailing from Sydney, Australia, said he was mesmerized by the event’s richness and warmth.

And as Rabbi Avrohom Bluming, Executive Director of Igud Hamelamdim put it, “Yom Tov is a time when family gets together, and so does the mechanchim family. What’s a better way of rejoicing on Yom Tov than focusing on the beauty and the joy of their cherished shlichus of chinuch, educating our precious children, the leaders of tomorrow’s generation.“

Help us support our Mechanchim by partnering with Igud Hamelamdim. Visit igudhamelamdim.org/donate to be a part of this important endeavor.