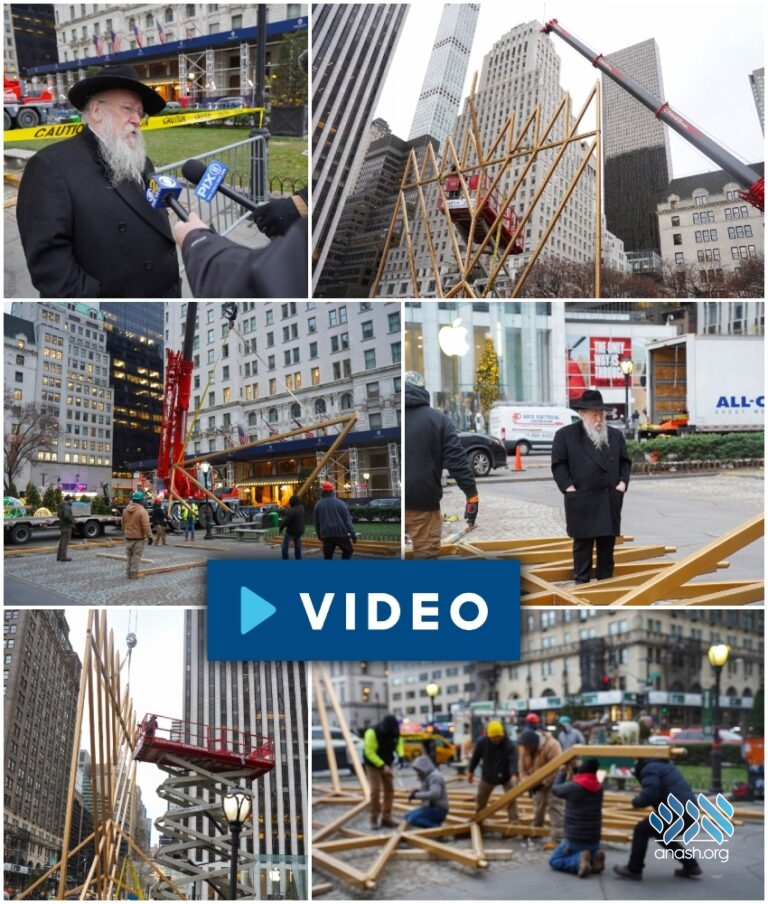 Mayor Eric Adams and Israel’s United Nations Ambassador Gilad Erdan will kick off Chanuka on Sunday when they light the first candle of the world’s largest menorah. They will be hosted by Rabbi Shmuel Butman, director of Lubavitch Youth Organization.

The world’s largest menorah, a New York City icon, will be lit Sunday night by Mayor Eric Adams and Israel’s United Nations Ambassador Gilad Erdan will kick off the Chanukah on Sunday, December 18 at 5:30 p.m., when they light the first candle of the famed menorah. They will be hosted by Rabbi Shmuel Butman, director of Lubavitch Youth Organization

The world’s largest menorah, a New York City icon and one of the world’s premier public menorahs, was erected at its annual home early on Thursday, Dec. 15, and is set to brighten up the city once again when it is lit each night of Chanukah from December 18 to December 26.

With the recent surge of antisemitic incidents and the explicit embrace of these hateful sentiments by influential cultural figures, organizers hope the celebration this year will be even larger and more joyous than ever before, as New Yorkers embrace the Chanukah’s message of light and hope, and ensure that hate will never win.

Throughout the eight-day holiday, many New Yorkers and visitors to the city will join the nightly lightings of the towering 36-foot menorah—certified by the Guinness World Records as the world’s largest—on Fifth Avenue and 59th Street at Grand Army Plaza near Central Park, right outside of the Plaza Hotel.

Mayor Eric Adams and Israel’s United Nations Ambassador Gilad Erdan will kick off the Chanukah on Sunday, December 18 at 5:30 p.m., when they light the first candle of the famed menorah. They will be hosted by Rabbi Shmuel Butman, director of Lubavitch Youth Organization and joined by real estate developer Rotem Rosen.

Organized by the Lubavitch Youth Organization, the event will feature a public menorah-lighting ceremony and live music with spirited Chassidic dancing. The menorah was designed in 1986 by world-renowned Israeli artist Yaacov Agam and inspired by a hand drawing by Maimonides of the original menorah in the Holy Temple of Jerusalem.

The celebrations carry added significance this year as Jewish communities worldwide mark the year of Hakhel, a once-every-seven-years tradition that sees Jewish gatherings focused on unity and Torah learning and practice.

“Chanukah is a holiday that celebrates the Jewish people’s remarkable deliverance from those who wished them harm, ” said Rabbi Shmuel M. Butman, director of Lubavitch Youth Organization. “When faced with darkness, this menorah serves as a symbol of New York City’s dedication to persevering and celebrating all its citizens as they are. And this year, we’re shining that great symbol ever so bright.”

A unique addition to this year’s festivities will be the “Full Light on Chanukah’s Last Night” on the last night of Chanukah (Sunday, Dec. 25), when all the lights of the menorah will be lit.

“This year’s celebration will be even bigger and more comprehensive than we’ve done before,” added Butman. “We are excited to be celebrating Chanukah  at the World’s Largest Menorah with the people of New York, and show the world even a little light can overcome much darkness.”

The annual New York City tradition is part of the worldwide Chanukah campaign, an initiative launched in 1973 by the Rebbe. The campaign focuses on creating awareness and promoting observance of the holiday. A menorah lighting has taken place at the location at Grand Army Plaza since 1977.

A central theme of the festival is to publicize and make known the story of the Chanukah miracle.

Today, the unprecedented public display of Chanukah has become a staple of Jewish cultural and religious life in New York City and around the world, forever altering the practice and perception of the festival. This year, Chabad-Lubavitch will set up more than 15,000 large public menorahs in more than 100 countries around the world, including in front of landmarks such as the White House in Washington, D.C.; the Eiffel Tower in Paris; and Trafalgar Square in London.