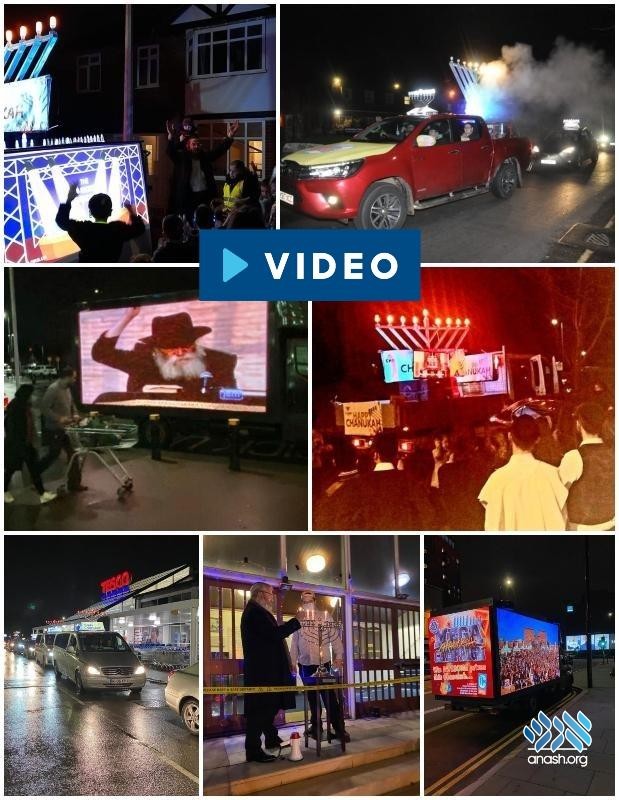 Defying Covid 19, L’chaim Chabad Lubavitch of Manchester created the greatest and most far-reaching Chanukah campaign ever, reaching thousands of British Jews in a incredible way.

This year, due to the unprecedented times L’chaim Chabad Lubavitch of Manchester launched an unprecedented Chanukah campaign to bring joy, light and hope to every segment and every age group across the entire Greater Manchester and beyond.

The prevailing atmosphere in Jewish communities approaching Chanukah was one of doom and gloom, with many Covid restrictions in place prohibiting regular celebrations. With this in mind, Rabbis Levi, Sholom, Shneur and Moshe Cohen sat down to plan how to make this not a ‘normal’ Chanukah which everyone thought they wanted, but an extraordinary one that would have people remember it as the one that connected them to Torah and brought the Geula.

And what a Chanukah it turned out to be!

In coordination with many shluchim throughout Northern England and beyond, from Manchester to Leeds, Chester to Newcastle, thousands of Jews were touched by the numerous public lightings, parades, zoom events and in-person events. Menorah kits were given out in unprecedented numbers, Chanukah gelt, gifts and food parcels distributed in numbers beyond anything Chabad Lubavitch of Manchester has seen before.

CKids and CTeen were incredibly involved this year too, with Manchester’s King David High School finally opening its doors to Lubavitch, after having refused them entry for years. Thanks to Chabad’s efforts, hundreds of students lit their menorahs, inspiring their families to join along.

Three party trucks with live music, dreidel men, props and Chanukah paraphernalia hit the city streets, bringing joy to dozens of private parties, city-goers and passersby. Menorah parades were organized in every one of Manchester’s 13 municipalities and attended by Jews of literally every affiliation.

The feedback the shluchim received was overwhelming. “Chabad saved Chanukah this year!” wrote one woman. “Manchester was on fire this Chanukah – you felt it wherever you went,” said another. Feedback even came in from remote villages far from any Jewish community, some even with frum-sounding names, expressing how Chabad’s ads inspired them to celebrate Chanukah this year.

One estranged young woman who has r”l intermarried, shared how for the first time ever, she sent a picture to her family of her lighting the menorah with her child. Feedback also came to volunteers who participated in Covid-safe visits. “This was our Chanukah miracle,” one family said.

Rabbi C., one of the local Litvishe rabbonim, wrote the following post as he was inspired by one small part of the Chanukah campaign:

“Do you want to know what I call gadlus? Over 200 students in King David lit the menorah tonight! Why? How did this remarkable feat happen? Because one man had a vision. Because one holy man cared deeply about klal Yisrael. Because this giant believed in the power of humanity. He believed that people have a spark inside them that was waiting for fuel.

“And the Rebbe believed that his shluchim could effect that change. There was opposition. There were naysayers who believed that it couldn’t be done. But the Rebbe proved them all wrong and continues to do so. A gadol with a vision and a heart that transcended all else.

“I’m not a Lubavitcher with a long beard. I’ve never learned Tanya. But more and more, I see how to ‘be Lubavitch’ means to ascribe to a mission of truly caring about Am Yisrael.”