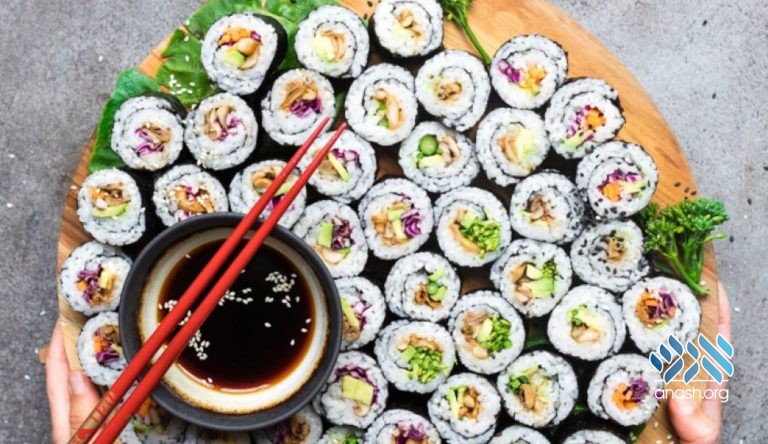 May I prepare sushi rolls on Shabbos?

In preparing sushi, there are a number of melachos that could apply:

Cutting food into a meaningful shape can be an offshoot of Koseiv—writing or forming. Mechatech—cutting to a specific measurement—is generally not an issue, since sushi doesn’t involve an exact measurement, and, moreover, we hold that Mechatech does not apply to food.

Vegetables shouldn’t be cut into small pieces due to the melacha of Tochein—grinding. If it is done immediately before the meal, some poskim are lenient, thus, although we don’t cut small pieces, we are still careful to do it adjacent to the meal in case some of the pieces end up being small.

The melacha of Makeh bePatish—putting the final touches to make something ready—does not apply to sushi. While some poskim hold that it applies to food, by sushi all the individual components are edible alone beforehand.

Me’amer is the act of collecting scattered produce. Halacha rules that it only applies (a) to produce that hasn’t been previously gathered and (b) only in the place where they grew. The Alter Rebbe quotes an opinion that consolidating produce into one glob—e.g. pressing figs together—is prohibited even indoors, but that is not the case by sushi.

Boneh (building) applies even to food. Some poskim extend this prohibition to attaching foods to produce a desired picture or shape, such as smoothing an egg salad to produce a certain effect, and according to this view, sushi which is smoothed, such as inside-out sushi, would be prohibited. However, many differ and hold that boneh by food applies only to a solid entity (e.g. making cheese) and not a weak one, especially one that can easily fall apart and is only meant to last for a short time, and this seems to be the Alter Rebbe’s view.

An offshoot of the melacha of Tofeir (sowing) is gluing two things together. Yet, sticking the nori from one side to other is not an issue as nothing other than edible food is used. Additionally, here the connection only temporarily until eating it shortly afterwards.

In practice, one may prepare sushi rolls on Shabbos, yet one should prepare them shortly before eating, and take care not to cut too small or in a special design.