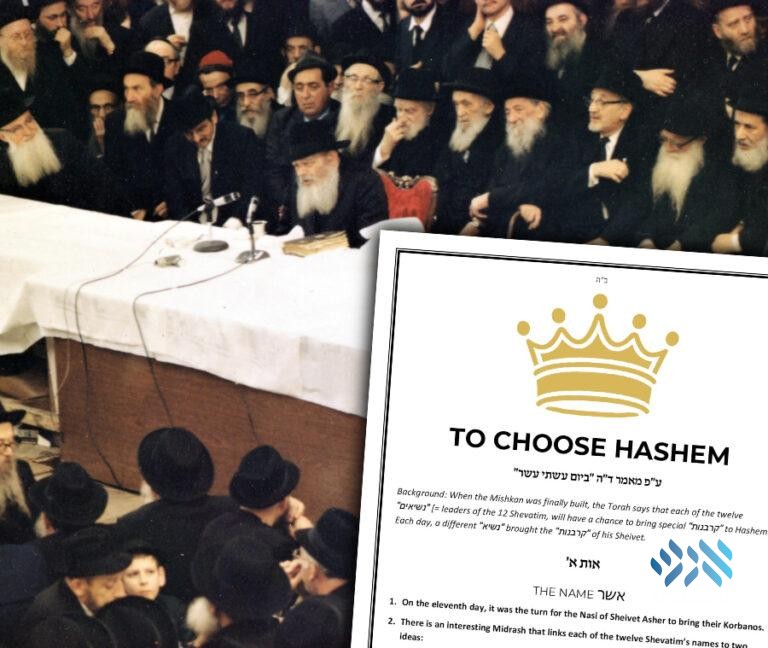 Over the past few months, bochur Moishy HaKohen Tauber has been releasing a new installment in his maamar adaptation series every couple of weeks, and has been receiving very positive feedback from those who study from it on Shabbos in any of the Crown Heights where the booklets are distributed, and from those who receive it in their inbox by email.

In preparation for Yud Alef Nisan, Moishy released an elaborate adaptation of the well-known maamar Beyom Ashtei Asar, which the Rebbe recited 11 Nisan 5731 and edited for publication in 5749. The maamar is known for the Rebbe’s fundamental explanations in our belief as Yidden – why a Yid chooses to serve Hashem. This “choice” transcends logic, but permeates our understanding as well.

The basis of the discussion is a parable taught by the Midrash, in which a king arrives in a city along with several of his officers. The people in the city were inclined to invite the different officers, and only one “smart” man wished to invite the king. What wisdom did this “smart” man have over everyone else?

The maamar provides multiple explanations for the central idea discussed, and it can be difficult to appreciate the differences between the explanations. An emphasis was made to highlight the uniqueness of each approach.

The adaptation of the maamar had been broken up into sections with headlines to make it easier to grasp each idea individually. The maamar contains several concepts that are mentioned briefly in few words. It can be easy to pass the eye, without noticing that a new idea has been presented. Therefore, there an emphasis was made to elaborate on these points.

In addition, for those who have already learned the maamar, the adaptation can serve as a summary that many will appreciate even more having studied it inside.

Those who would like to receive the adaptations as they are released, or sponsor an upcoming maamar, can email MahatPublications@gmail.com.