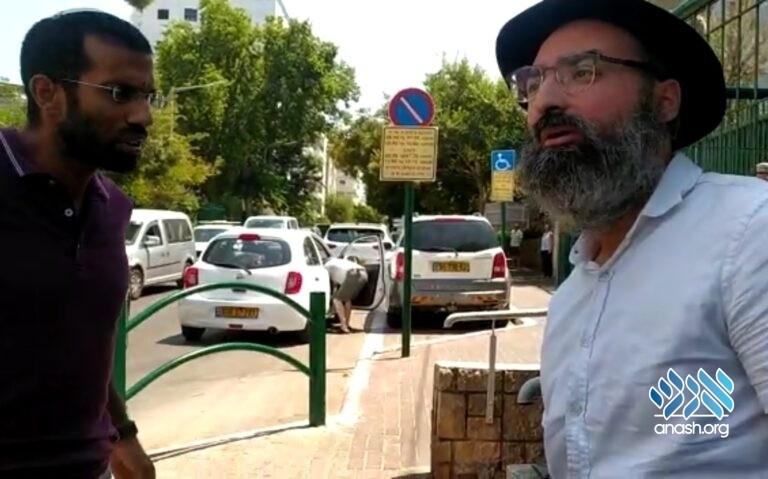 Rabbi Shneur Yitzhakov, a Lubavitcher living in Ra’anana, was stabbed Sunday by a 17-year-old Arab shouting “Allahu Akbar.” Police claim that this was a criminal incident.

Rabbi Shneur Yitzhakov, a Lubavitcher living in Ra’anana, was stabbed Sunday by a 17-year-old Arab who lives in the city.

Even though the stabber called out “Allahu Akbar,” police claim that this was a criminal act, not terrorism.

According to Yitzhakov, he had just finished counseling a couple and was crossing a street when he found himself next to a deranged-looking man.

In an interview with 103FM Radio, Yitzhakov recounted the moments he was attacked. “As I went down towards the crosswalk, I looked into the eyes of someone right next to me at the crosswalk. His gaze just caught me, took me in, burning like a fire. Such a murderous gaze focused strongly on me. I did not understand what was happening.”

“I returned his look and then I saw a cross on his chest, and I thought that was strange. Then I moved my eyes to his side and saw the blade sticking out behind him. He just slipped the knife out from behind, a knife with a light blue handle. At that moment, I looked at his eyes again, and it was as if they were about to come out of their sockets. Then he shouted, ‘Allahu Akbar,’ and held out the knife.

The rabbi fought him off, along with the help of another passer-by who came to help. The rabbi was stabbed multiple times in the leg as they struggled, and sustained injuries to his leg. He was released from the hospital soon after.

Police report that they arrested a youth who attacked two people in two different incidents in Ra’anana. Police are claiming the attacks were criminal and the attacker is mentally unstable. In the recent terror attack in Bnei Brak-Givat Shmuel, the police also initially declared it a criminal attack.