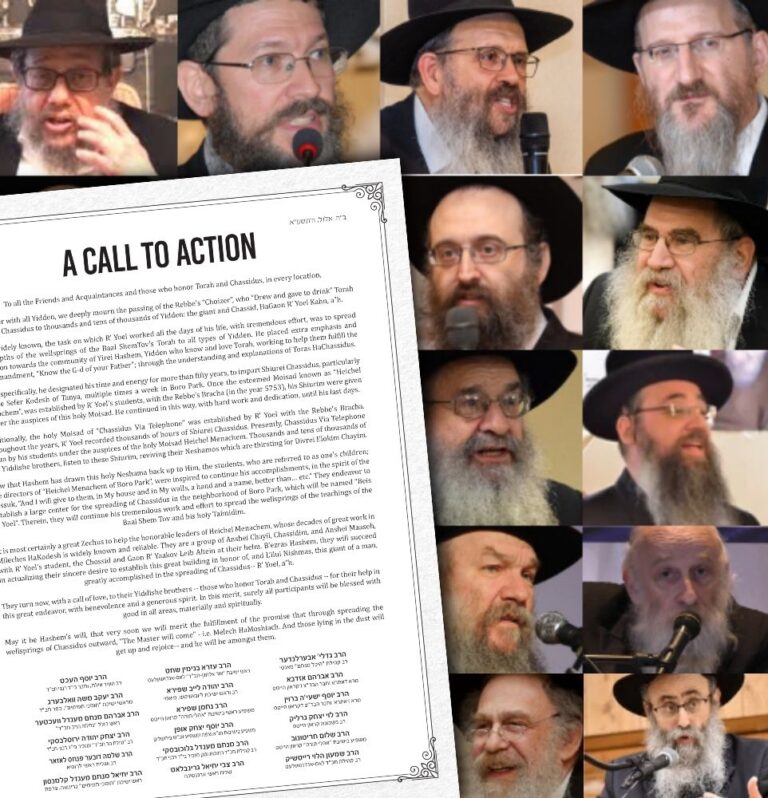 A group of Lubavitcher Rabbonim and Mashpi’im signed a kol korei, urging chassidim around the world to support the Bais R’ Yoel project, which will build a $2.5 million Chassidus center in the heart of Boro Park in memory of Reb Yoel Kahn.

Our Rabbanim and Mashpiim are calling us to act, requesting that everyone in our community support a very important initiative that Heichel Menachem has launched.

Plans are well underway for the building of Bais R’ Yoel – a project taking place in memory of Reb Yoel Kahn, the Rebbe’s choizer.

The project: building a Chassidus-center for the Yidden of Boro Park, and the entire world.

Our Rabbanim and Mashpiim stand behind Heichel Menachem’s campaign to raise the funds for the building, and they are encouraging all Yidden to join the cause.

“It is most certainly a great zechus to help the honorable leaders of Heichel Menachem, whose decades of great work in mileches hakodesh is widely known, and reliable. They are a group of anshei chayil, Chassidim, and anshei maaseh, with R’ Yoel’s student, the Chossid and Gaon R’ Yaakov Leib Altein at their helm”

Let’s join together to heed their call, and build R’ Yoel’s legacy.

To donate to the Bais R’ Yoel Campaign, visit: Baisrebyoel.com

The full text of the “Call to Action”:

To all the Friends and Acquaintances and those who honor Torah and Chassidus, in every location,

Together with all Yidden, we deeply mourn the passing of the Rebbe’s “Choizer”, who “Drew and gave to drink” Torah and Chassidus to thousands and tens of thousands of Yidden: the giant and Chassid, HaGaon R’ Yoel Kahn, a”h.

As is widely known, the task on which R’ Yoel worked all the days of his life, with tremendous effort, was to spread the depths of the wellsprings of the Baal ShemTov’s Torah to all types of Yidden. He placed extra emphasis and
devotion towards the community of Yirei Hashem, Yidden who know and love Torah, working to help them fulfill the Commandment, “Know the G-d of your Father”; through the understanding and explanations of Toras HaChassidus.

More specifically, he designated his time and energy for more than fifty years, to impart Shiurei Chassidus, particularly on the Sefer Kodesh of Tanya, multiple times a week in Boro Park. Once the esteemed Moisad known as “Heichel Menachem”, was established by R’ Yoel’s students, with the Rebbe’s Bracha (in the year 5753), his Shiurim were given under the auspices of this holy Moisad. He continued in this way, with hard work and dedication, until his last days.

Additionally, the holy Moisad of “Chassidus Via Telephone” was established by R’ Yoel with the Rebbe’s Bracha. Throughout the years, R’ Yoel recorded thousands of hours of Shiurei Chassidus. Presently, Chassidus Via Telephone is run by his students under the auspices of the holy Moisad Heichel Menachem. Thousands and tens of thousands of our Yiddishe brothers, listen to these Shiurim, reviving their Neshamos which are thirsting for Divrei Elokim Chayim.

Now that Hashem has drawn this holy Neshama back up to Him, the students, who are referred to as one’s children; the directors of “Heichel Menachem of Boro Park”, were inspired to continue his accomplishments, in the spirit of the possuk, “And I will give to them, in My house and in My walls, a hand and a name, better than… etc.” They endeavor to establish a large center for the spreading of Chassidus in the neighborhood of Boro Park, which will be named “Beis R’ Yoel”. Therein, they will continue his tremendous work and effort to spread the wellsprings of the teachings of the Baal Shem Tov and his holy Talmidim.

It is most certainly a great Zechus to help the honorable leaders of Heichel Menachem, whose decades of great work in Mileches HaKodesh is widely known and reliable. They are a group of Anshei Chayil, Chassidim, and Anshei Maaseh, with R’ Yoel’s student, the Chossid and Gaon R’ Yaakov Leib Altein at their helm. B’ezras Hashem, they will succeed in actualizing their sincere desire to establish this great building in honor of, and L’ilui Nishmas, this giant of a man, greatly accomplished in the spreading of Chassidus– R’ Yoel, a”h.

They turn now, with a call of love, to their Yiddishe brothers — those who honor Torah and Chassidus — for their help in this great endeavor, with benevolence and a generous spirit. In this merit, surely all participants will be blessed with good in all areas, materially and spiritually.

May it be Hashem’s will, that very soon we will merit the fulfillment of the promise that through spreading the wellsprings of Chassidus outward, “The Master will come” – i.e. Melech HaMoshiach. And those lying in the dust will get up and rejoice– and he will be amongst them.