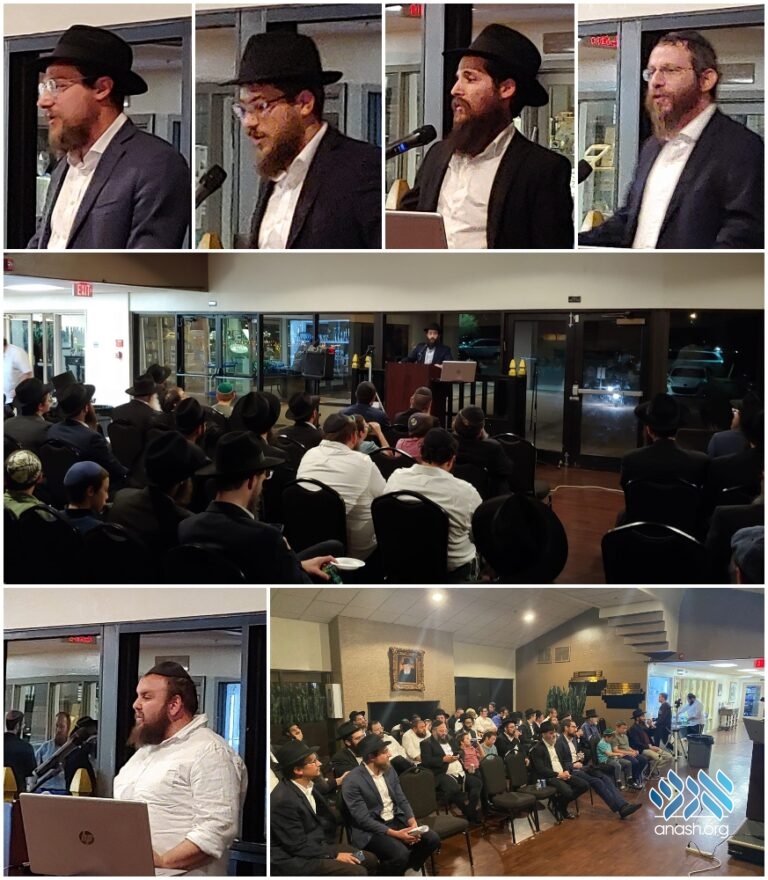 The Lubavitcher community of Phoenix, AZ, gathered for a Hakhel Kinus Torah on Sunday, 29 of Tishrei, as per the hora’a of the Rebbe. The event was attended by anash, shluchim, mashpi’im and melamdim and was addressed by six local community members.

Rabbi Mendy Deitsch, Head Shliach of the East Valley, spoke about why we daven for geshem in two separate times, as well as the idea of gevuros with regard to geshem.

Rabbi Efraim Zimmerman, Shliach to Oro Valley, AZ, addressed the crowd about the idea of “ein melech b’lo am.”

Rabbi Tzemach Gelman, Kita Ches melamed in Cheder Lubavitch Arizona, spoke about a machlokes in Rishonim about saying mashiv haruach for 30 days vs. 90 times, as well as the idea of davening for the needs of the majority of the world (b’eichus).

Rabbi Dovber Dechter, local rov and shliach to Downtown Phoenix, taught a letter of the Rebbe Rayatz that is quoted in part in the HaYom Yom of Shabbos Bereishis, 29 Tishrei and Shabbos Noach of this year. The letter speaks of the importance of limmud haTorah in our lives and the effect that it has.

Rabbi Buzzy Ajzenshmidt, Shliach to Central Phoenix, spoke about the inyan of “beis reishis,” bringing out how every Yid is connected to Torah and even a Yid who does not learn can always bring out his connection to Torah.

Finally, Rabbi Levi Altein, mashpia in Scottsdale Mesivta, concluded the evening with a powerful vort about Hakhel, and why the Rebbe referred to the entire year as a “Shnas Hakhel.”