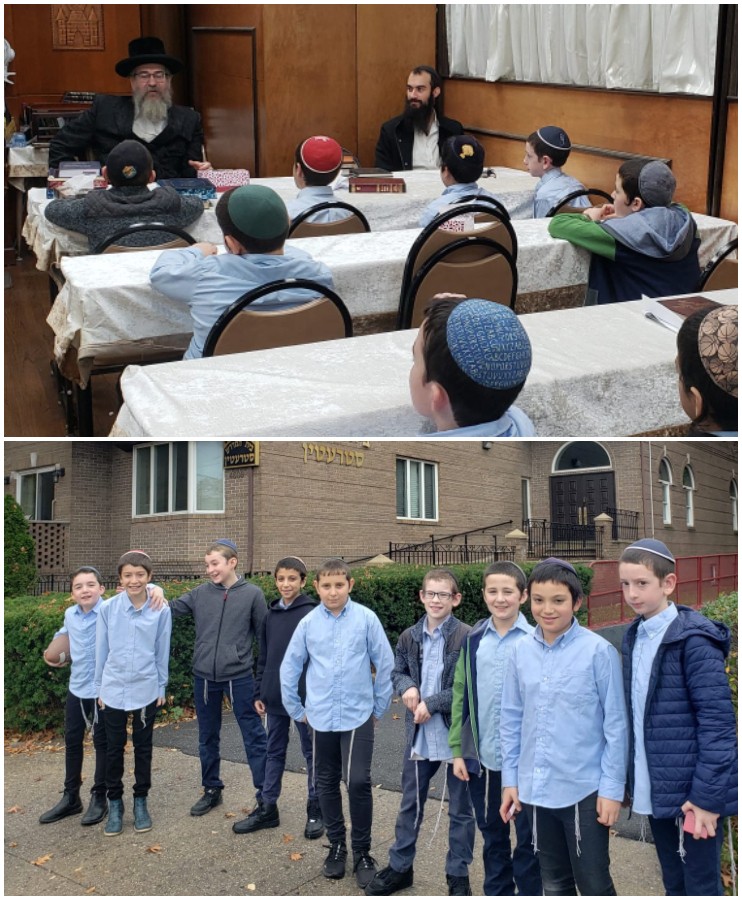 After hearing a fascinating story about Reb Yehudah Tzvi Hirsch of Strettin, the talmidim at Lubavitcher Yeshiva Ocean Parkway visited the Strettin Bais Medrash where they were addressed by his descendant.

After hearing a fascinating story about Reb Yehudah Tzvi Hirsch of Strettin, the talmidim at Lubavitcher Yeshiva Ocean Parkway took a special trip where they heard more about him and his dynasty.

The story the students heard took place at the turn of the 19th century. After the passing of rebbe Reb Uri of Strelisk, known as “the Seraph” (“the fiery angel”), the leadership of his followers passed to his primary disciple, Rabbi Yehuda Zvi-Hirsch of Strettin. However, not all the chasidim accepted his leadership wholeheartedly; some were still hesitant whether he was truly worthy to take the place of his predecessor.

On one of the new rebbe’s journeys together with a group of the chasidim, he directed them to proceed into the city of Pesht (today part of the Hungarian capital of Budapest). As they wheeled along the main street, they passed a butcher shop. The Rebbe told the driver to stop in front of it. Above the entrance hung a prominent sign: “Here one may buy kosher meat of the highest standard.”

The Rebbe stared intently in the wide front window. Suspended there from a hook in the ceiling was a large piece of meat for sale that appeared fresh, juicy and tender.

The Rebbe turned to two of the chasidim and asked them to go find out what was the name of the shochet (kosher slaughterer) and where he lived. He added softly that today perhaps they will eat of this meat.

The chasidim were not clear from his tone if he was asking or telling them. Their faces stretched in puzzlement upon hearing the out-of-character request of the tzadik. Well known was his dedication to personal spiritual advancement, and thus aversion to fancy foods and other worldly pleasures. Yet here he was seemingly intending to feast upon would probably be a delicious-looking piece of meat.

The pair assigned to the task were quick to clarify the identity of the shochet and his address. The Rebbe promptly announced that they would all go there together.

They found the house and knocked on the door. The shochet‘s wife opened and welcomed them with a happy smile. Her appearance was of a fully modest Jewish woman, while her face radiated kindness. One of the chasidim who had tracked down the address asked where her husband was and she answered that he was expected home soon.

When the Rebbe then asked if there was a possibility that he and a few of his chassidim could sleep in their house that night, she quickly invited them to do so. “If so,” said the Rebbe, “we all need to eat supper first. Can you provide us a meal with meat?”

“Of course,” she responded. “With pleasure.” And she began setting the table.

The chasidim stared in amazement. Why was the Rebbe requesting to eat specifically meat? And in a house that he knew nothing about and from a slaughterer he was not acquainted with. It was beyond belief. Still, not one of them could gather up the nerve to ask their leader about his highly irregular request.

Not so long after, the door opened and in walked the shochet. Immediately the perplexity of the chasidim accelerated. His thick overcoat, large fur hat and heavy boots were in the style of the Polish nobility. The garments under his coat were tailored to the current modern fashion, a manner completely unacceptable in G-d-fearing Jewish communities then, especially for a shochet. How could it be that the Rebbe would eat in the house of such a person, and trust his slaughtering and his kashrut observance? It was inconceivable.

The rebbe and the shochet greeted each other pleasantly. Before sitting down for the meal, the Rebbe, who had worked in his younger years as a shochet, asked politely to examine the knife [i.e. the sharpness of its blade and its smoothness –yt]that was used to slaughter the meat which was being served.

To everyone’s wide-eyed astonishment, the shochet refused to comply, even though this was a traditional and acceptable request for a very religious guest or customer to make. His expression turned severely serious as he said, “Please excuse me, your honor. I will not be at all offended if you or your students refuse to eat from our meat. But under no circumstances can I show you my knife!”

The chasidim were aghast at the refusal to honor their rebbe’s reasonable request. The tzadik, however, was not fazed. He requested of the shochet that the two of them step into a separate room. Once they were in privacy, he revealed his identity fully as Rabbi Yehuda Zvi-Hirsch, head of the rabbinical court of Strettin, and declared that with the supreme authority of the Torah he decrees upon the shochet to present to him his slaughtering knife.

The shochet turned pale, realizing that according to Jewish law he no longer had a choice. He quietly fetched the knife and put it in the Rebbe’s palm, handle first. The Rebbe held it by the handle and examined its blade. He was deeply impressed; the edge of the blade was extremely sharp and completely smooth.

Then he noticed there were letters carved into the handle. He looked closer and was astonished to see the following extraordinary inscription:

“This is the knife of Avraham our forefather, peace unto him, that we eat in his merit [the meat slaughtered with it].”

It took Rabbi Yehuda-Zvi a few moments to calm his emotions and regain his equilibrium. After another gaze at the inscription, he walked slowly out of the room. His host followed solemnly behind. The Rebbe sat down at the table and with a broad smile told his chasidim they could join him to eat, including the meat. They greatly appreciated the meal, while their host, the shochet, relieved that the Rebbe had not mentioned the inscription, took particular pleasure from the Torah thoughts that the Rebbe shared.

Actually, not all of the chasidim ate from the meat. The faith and trust of a few of them in the new rebbe was not so complete as to alleviate their concerns about the kosher status of the food and their suspicions of the shochet. Each one surreptitiously pushed the meat on his plate onto the handkerchief he had placed on his lap, in order to throw it away outside after the meal at a quiet moment.

The next morning the group rose early, and after prayers and a small breakfast they departed. Only when they reached a good distance from the city did the Rebbe tell them about the startling inscription on the knife. The chasidim all cried out in shock, some with joy that they had merited to eat from meat that had been slaughtered with the knife of Avraham Avinu (our father Abraham), the minority from sharp disappointment that they hadn’t believed in the Rebbe enough to rely on his invitation.

Those latter chasidim decided they would immediately return to Pesht and again request hospitality in the home of the shochet. Then they too would be able to eat of the meat slaughtered by his unique, holy knife.

When they arrived in Pesht, they set out in the direction of the slaughterer’s house. But they weren’t able to locate it. After fruitlessly wandering up and down the street and a few other adjoining ones, they started asking local people for help. But each one that spoke to said he was not acquainted with such a shochet, and insisted that there had never been such a butcher store in the city.

Realization dawned on them. The shochet must be one of the 36 hidden tzadikim, in whose merit the world continues to exist. That he had accepted them into his home and interacted with them could only be in honor of their rebbe, R. Yehuda Zvi, the tzadik of Strettin. If only their faith had been greater, they too would have had the privilege of eating from the knife of our patriarch Avraham.

Hearing the story clearly left an impact on the students in New York of 2022. Later in the week, the talmidim had the incredible opportunity of visiting the Rebbe’s descendant, whose Bais Medrash is across the street from their Yeshiva.

Assembled in the Strettin Bais Medrash on Bay Parkway, the Talmidim heard fascinating insights from the Strettin Rov about his predecessor, the baal hamaaseh, and then received warm words of chizuk and encouragement. The Rov detailed his family’s relationship with the Maggid and his personal connection with our Rebbe.

The Rov briefly quizzed the Talmidim and commented on their broad knowledge and mentchlechkeit.

“Bringing the story to life through meeting the ainikle of the Rov gave the Talmidim a whole new appreciation and Chayus for the learning they were doing in the classroom and surely one that will stay with them for a long time,” Principal Rabbi Menachem Lifshitz said.