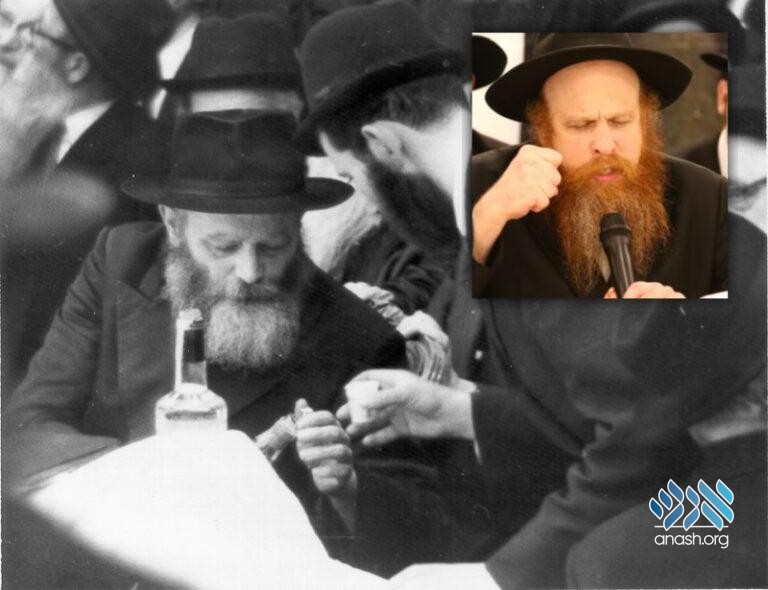 When during a farbrengen, a Jew approached the Rebbe and said “l’chaim far gantz Lubavitch”, the Rebbe suggested that there was something more important he should attend to.

Rabbi Shmaryahu “Shmerel” Gurary was a prominent chosid from a prominent chassidishe family. He was an askan and a philanthropist, and totally devoted to the Rebbe and his shlichuyos. He merited much kiruv from the Rebbe, until he passed away – right in front of the Rebbe – on the night of Yom Kippur 5745.

In 5712, he was living in Tel Aviv, where he was very involved in the community and in the Achei Tmimim Yeshiva, (he had been forced by the Lithuanian government to leave the country and leave all his wealth behind).

This week, I saw an amazing letter that the Rebbe sent to him that year, and I would like to share an excerpt of it. Following is the final paragraph of the letter (item 5), after the Rebbe addresses various aspects of askonus, and the Rebbe concludes the letter with it.

The Rebbe wrote there:

I will try a free translation:

“While you were in NY for a relatively lengthy time, many important matters were discussed (with the Rebbe?), but the most important matter was overlooked, and that is the question “Ayeko”? It’s known the answer of the Alter Rebbe to one of the officials who asked the meaning of this question, and the Alter Rebbe explained that this is a question that the Eibishter asks every single person. Where are you? What’s happening with you?

“Certainly all of your askonus activities are very worthy, those involving Aguch, involving the yeshivos, involving Kfar Chabad etc. But despite all of the above, you have to remember that Torah tells us don’t forget about yourself, everyone needs to be preoccupied with their own spiritual wellbeing as well. And the question is “AYEKO?” Reb Shmaryahu (with all the titles that I already bestowed upon you at the beginning of the letter [there he is addressed as הוו”ח אי”א נו”נ עוסק בצ”צ וכו’ מוה”ר], and if you’re deserving of additional titles, then we can include those as well, with pleasure, but the question is) “AYEKO?” What is happening with learning Chassidus, with learning nigleh, vechulu vechulu?”

We all spent days farbrenging for Yud Tes Kislev, and we all, surely, heard many stories and vertlach. But after everything, as the Rebbe writes so powerfully, we need to hear the AYEKO?! You had farbrengens and made events and organized programs. But what is happening with you?! מבשרך אל תתעלם, what increases in your learning Torah, nigleh and chassidus, resulted from all of these days of inspiration.

And the same applies to Chanuka as well. We can plan extravagant events that spread the light of Chanuka to hundreds or thousands of people. And we need to. The pirsumei nisa and mivtza Chanuka need to take place with the greatest shturem. And, with the increase of darkness in the world today, we need ever more powerful light to dispel it.

But, after all of this, we have to ask ourselves (and know that the Eibishter is asking us, the Rebbe is asking us) AYEKO?! Vu bist du? Where is the usage of light to dispel darkness in my own personal life, with my own internal darkness? How am I endeavoring to overcome the urge of להשכיחם תורתיך ולהעבירם מחוקי רצוניך that comes from within, – my own temptation to allow myself to be distracted and stray from my diligence in learning Torah?

Let’s remember that the Rebbe was not writing this to some young confused bochur. Reb Shmerel Gurary, at the time of the writing of the letter, was almost 40 years old, and an accomplished askan in many areas (as is reflected in the letter itself). Moreover, the Rebbe clearly greatly valued his askonus (and that was what occupied the bulk of the letter). But still, the Rebbe demanded of him to hear (and respond to) the question AYEKO.

We may be accomplishing amazing things in so many different areas. But we must remember that none of it is a substitute for focusing on our responsibilities toward our own neshomo; – to learn and daven and live as Yidden!

I might add that this is all applicable even if we’re giving shiurim. Because teaching, and the learning that we may be forced to do in order to be able to teach, does not take the place of learning for ourselves, for the sake of learning.

[The Mishna says הלומד על מנת ללמד מספיקים בידו ללמוד וללמד. Seemingly, the word ללמוד is superfluous. If he will succeed in his teaching, then that would seem to automatically include the fact he first learned it, – an unavoidable prerequisite to teaching? I think that based on the above it is understood: One can learn his teaching material, but that is not yet genuine learning. Because the person who learns in order to teach is a virtuous goal, he is rewarded with success in his own learning as well.]

Even if we are giving shiurim, and classes, and teaching, that is not enough to satisfy the question AYEKO. We need to focus on ourselves, and on our own growth in learning, for the sake of learning.

Sometimes we get very caught up with our grandiose plans for the city, the country or the world. They may, in fact, be very important, but we can never allow them to distract us from the AYEKO, from our responsibility toward ourselves.

Once, during a farbrengen, a Jew approached the Rebbe and said “l’chaim far gantz Lubavitch”. To which the Rebbe responded “Lubavitch ken zich alein an eitza gebben, zog besser l’chaim far zich” [Lubavitch can manage fine on their own, your l’chaim should better be for yourself].

The AYEKO, in the Rebbe’s letter, is to remind us of that, to get us back to worrying about ourselves as well. And today, in the zoom/whatsapp/video conference age, it is much easier than it sounds. Look up your old chavruso, your long-lost friend or your relative, and set up a chavruso. Make a plan to complete shas, to complete samech vav, or to learn whatever should be next on your agenda. And just start learning, for yourself, because you have to also be a good chosid and a good Jew.

I would like to point out further, that even once you make your new kvius, which is beautiful, don’t forget that it doesn’t end with that either. After speaking about learning nigleh and chassidus, the Rebbe adds “vechulu”. And then another “vechulu”. What is the “vechulu”? Perhaps a chassidisher davening. Maybe a chassidisher Krias Shma Sh’eal Hamita. Maybe avoda with eating, iskafya and so on. And, maybe all of the above and more. I think we need a whole farbrengen just to get to the bottom of the “vechulu”!

This idea is contained in this week’s parsha as well:

On the possuk וילכו אחיו לרעות את צאן אביהם בשכם, Rashi brings from Chazal נקוד על את שלא הלכו אלא לרעות את עצמן. We know that the avoda of Yaakov with the sheep was avodas habirurim, – the avoda to refine and transform the world. The shevotim were involved with this, and they knew how to deal with the world and affect it on a grandiose scale. When needed they could conquer, transform and destroy an entire city.

But they didn’t forget about themselves. On that occasion they went לרעות את עצמן, to hearken to the AYEKO, to deal with themselves and take care of themselves, – to fix up whatever needed fixing in their own lives.

Standing at the Shabbos that is the vayechulu of Yud Tes Kislev, and the beginning of Chanuka, we need to remember and hear the AYEKO, and make sure that we can answer with increased learning in our own lives. That is the best way to ensure that these yomim tovim are ongoing.