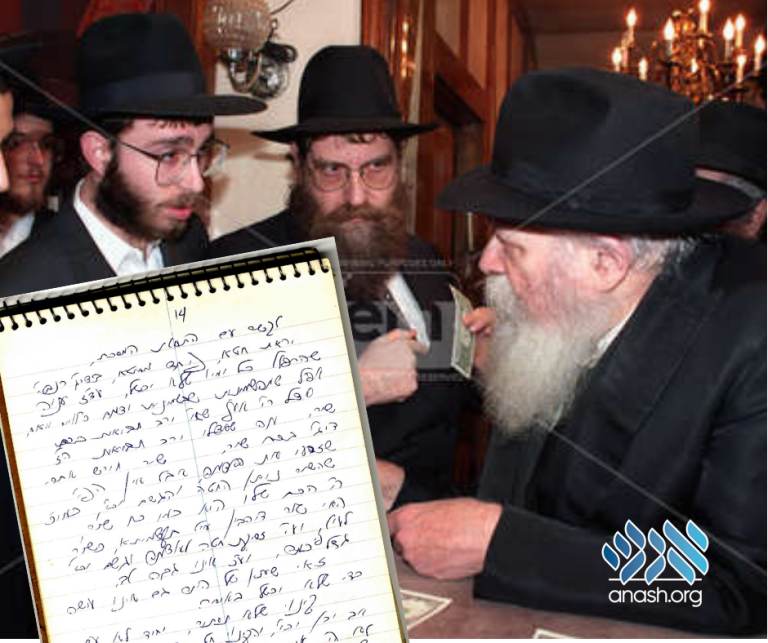 An exciting announcement has been made by Lahak Hanochos: They have successfully recovered the full Farbrengen of Shavuos 5732, and it has been published in a special booklet in honor of Yom Tov.

One of the editors in Lahak explains:

“Only snippets of this Farbrengen had been previously available. Some parts were edited by the Rebbe and printed in the hosafos of Lekutei Sichos volume eight. But now, the Farbrengen in its entirety is available for Chassidim to study and enjoy, just as when the Rebbe delivered it.

“The most significant contribution in restoring the Farbrengen came from yellowing pages stored in the archive of Rabbi Zev Katz, the Gabai of 770. On that Shavuos, he evidently recited Havdalah as soon as Yom tov ended, and immediately began surreptitiously taking notes of the Rebbe’s words, transcribing an almost word-for-word ‘Hanochoh’. This edition from Sicha 3 and onward, are based on his transcripts. The first two Sichos were written by Rabbi Leibel Shapiro, Rosh Yeshivah Gedolah of Miami, during the Chazarah after Yom Tov was over.”

The Rebbe said two Maamarim during that Farbrengen, “Mar’eihem Uma’aseihem,” and “B’sha’a Shehikdimu.” The former was a short Maamar, delivered in only twelve minutes, and afterwards the Rebbe explained that it was the first teaching the Maggid of Mezeritch recited when he assumed leadership, on Shavuos 5521.

The Rebbe said that he had planned to hold a Farbrengen on the first day of Shavuos, and to deliver that Maamar – of the Baal Shem Tov – on the Baal Shem Tov’s Yahrzeit, especially taking into account that the Alter Rebbe had chosen this specific Maamar to demonstrate what Chassidus was (being that the Alter Rebbe’s imprisonment was a preparation for a greater dissemination of Chassidus). However, the Rebbe said, that Farbrengen didn’t take place for a certain reason, and therefore he delivered the Maamar the next day.

This booklet is a preview of Toras Menachem volume 68, which is currently being prepared. Lahak Hanochos asks anyone who has Hanochos, yomanim or descriptions of the Farbrengens of those years to please send a copy to the Lahak offices, or by email, to [email protected]