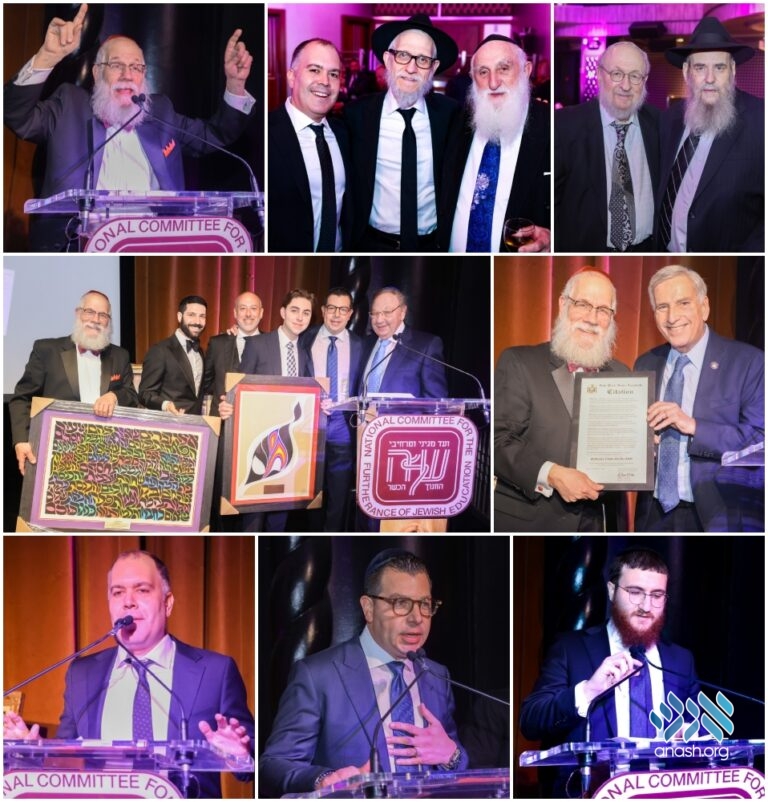 The National Committee for Furtherance of Jewish Education (NCFJE) held its 82nd Annual Awards Dinner this past Sunday evening. It was dedicated and paid tribute to the life work of Rebbetzin Chave Hecht, OBM.

On Sunday, 17 Kislev, Manhattan’s prestigious Edison Ballroom was filled as hundreds of friends and supporters of the National Committee for Furtherance of Jewish Education (NCFJE) celebrated its gala 82nd Annual Awards Dinner.

The dinner was entirely dedicated and paid tribute to the life work of Rebbetzin Chave Hecht, OBM, following her passing this past year on 7 Adar 1.

The evening began with a stirring invocation by Rabbi Yanky Hecht, Shliach to Sunset Park, Brooklyn lauding the vision of the Rebbe and the work of Rebbetzin Chave Hecht over the past 70 years.

Mrs. Ellen (Kramer) Gross, a member of the NCFJE Board, welcomed the guests to this special evening, and Mr. Sholom Jacobs, President of NCFJE, sang the Keil Molei Rachamim as a tribute to the late Rebbetzin Hecht.

A video tribute to the life of Rebbetzin Hecht was played in 3 parts. The first segment touched on her upbringing and some of the programs she was involved in throughout her life, including being one of the founding teachers of Beth Rivkah – the flagship Chabad Lubavitch school for girls, the Released Time Program, Toys for Hospitalized Children, Taharas HaMishpacha, N’shei Chabad and many more. Mrs. Freeda Shapiro followed with memories of Rebbetzin Hecht, words of inspiration and lessons we can learn from her.

The second segment was a touching personal testimony from a woman who benefitted from Rebbetzin Hecht’s wisdom and guidance, followed by a moving talk by Mrs. Sarala Deitsch of her experiences as a grandchild growing up in Rebbetzin Hecht’s home.

The final segment was about the founding and leadership of Camp Emunah, which, as Rebbetzin Hecht put it, was “her 13th child” and one of her greatest accomplishments.

A proclamation in memoriam to Rebbetzin Hecht was issued and presented by Assemblyman David Weprin.

The evening concluded with a special presentation by Scott Kupferman and JJ Hecht, on behalf of Toys for Hospitalized Children to Neil Kupferman for leading a mission to Poland in October 2022. They visited a temporary orphanage with 700 children refugees from Ukraine and brought all the children coats, winter accessories and toys to brighten their stay and remind them that there are people who care, even halfway around the world.

Attendees returned home inspired to continue the work of Rebbetzin Hecht, and with resolve to bring the lessons learned from her into their daily lives.

NCFJE was founded in 1941 by the Frierdiker Rebbe to teach Torah to public school students through the Jewish Released Time Program. Over the past 82 years, the organization launched many social welfare and Jewish education initiatives, including Camp Emunah, Hadar HaTorah and Operation Survival, among others.