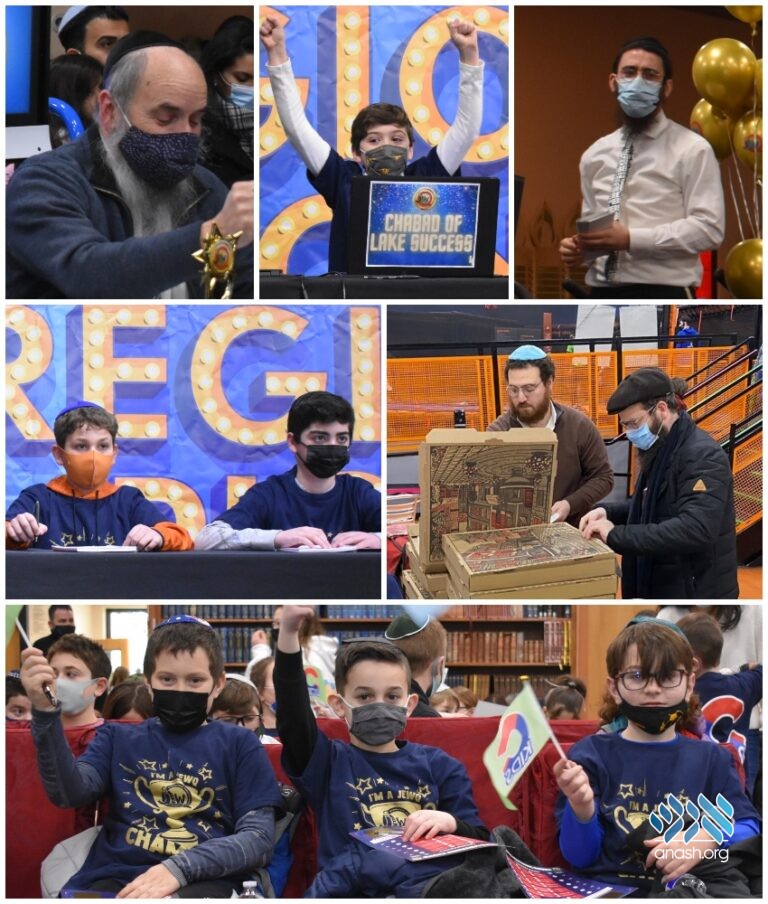 50 students from 10 different Hebrew schools across Long Island represented their communities on the JewQ stage at the regional championship event.

This week, 50 students from 10 different Hebrew schools across Long Island represented their communities on the JewQ stage at the regional championship event. Hosted by Chabad of Long Island at the Chai Center of Dix Hills, the regional event united over 500 kids in celebration of Torah knowledge.

Over the past few weeks, JewQ champions have been studying harder than ever in anticipation of this regional championship event. The local finalists took the stage, with their friends and family cheering them on from the crowd. The judges challenged them with three rounds of questions covering a broad spectrum of Jewish history and tradition.

Racing against the clock, the children rushed to enter their answers and progress to the next round before the sound of the buzzer went off. At the end of the evening, five young winners were declared regional champions and will go on to the JewQ International Championships Finales.

In an exciting twist, a surprise bonus round was added where the judges challenged the family members in the crowd with Torah trivia questions. After months of their children studying in their free time, it was amazing to see how much Jewish knowledge their parents had mastered.

“JewQ has made a huge splash in our community,” says Rabbi Tuvia Teldon, Director of Chabad of Long Island and one of the event’s official judges. “The amount of knowledge the kids and their families are walking away with is very impressive.”

The Long Island competition is just one in a series of regional events taking place across the globe before the international Championship finale event at the CKids Shabbaton in March. The unforgettable weekend experience in Princeton, New Jersey, brings parents and kids together for thrilling adventures and meaningful Jewish experiences.

The promise of an international Shabbaton gets kids motivated to learn, along with other incentives provided by each region. In Long Island, any student who scored above a 70% average on all three tests was treated to a special trip to SkyZone.

But the biggest motivation for kids is the knowledge gained. “It wasn’t only about winning for me,” says Spencer Shoenfeld, a 4th grader at the Chai Center Noskin Hebrew School in Dix Hills. “I actually just love studying and love being part of JewQ.” Other winners include Aryah Youseflaleh, grade 3, Lake Success Chabad; Shylo Sinn, grade 5, Lubavitch East End; Eva Halimi, grade 6, Chabad of Great Neck; Ethan Nourmand, grade 7, Chabad of Brookville.

“Our kids have taken on a new excitement for learning that I’ve never seen before,” says Rabbi Dovid Weinbaum, director of The Chai Center Hebrew School in Dix Hills. He is thrilled with the results of his Hebrew school’s third consecutive year participating in the program. The JewQ model is the alternative to traditional classroom teaching and is on track to become the next big thing in Jewish education. So far this year, over 2,000 Hebrew school students have joined.

After the excitement of the regional championship, JewQ finalists count down to the final test. Kids are studying harder and harder, taking their books home after Hebrew school to memorize facts and review information. “My daughter takes this more seriously than any of her classes at school,” one parent told a shliach.

Rabbi Moshe Kotlarsky, vice chairman of Merkos L’inyonei Chinuch, is most impressed by the kids’ excitement. “Seeing the children so passionate about their heritage and bringing that inspiration into their homes assures us a bright Jewish future.”