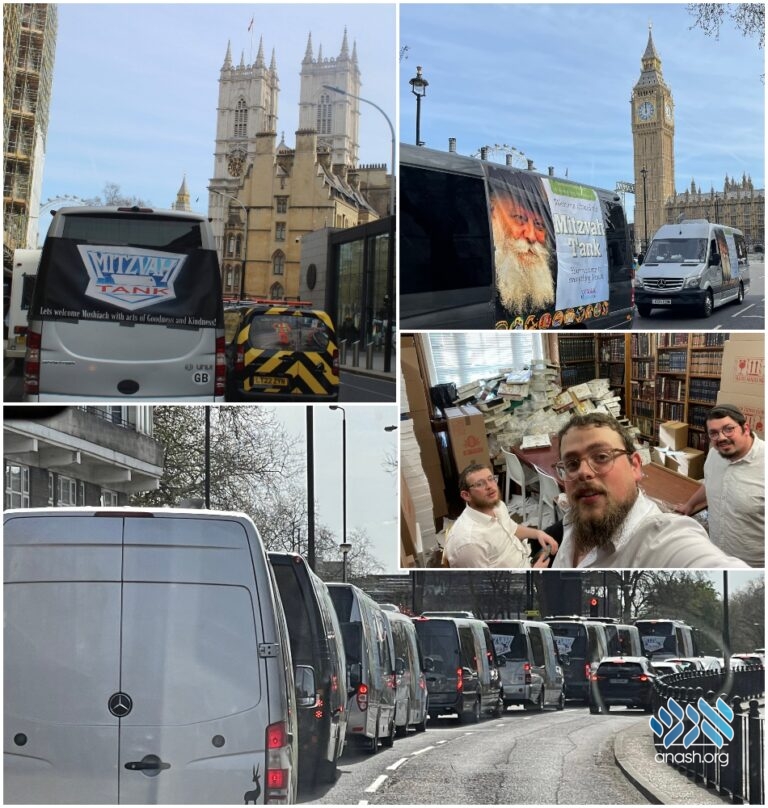 In honor of Yud Alef Nissan, 12 Mitzvah Tanks paraded through London, passing by the city’s landmarks and bringing the message of Pesach to thousands.

12 Mitzvah Tanks paraded through London a week before Pesach, passing by the city’s landmarks and bringing the message of Pesach to thousands.

The parade, coordinated by Shneur Zalman Tiefenbrun and Moshe Gordon, was held in honor of Yud Alef Nissan, the 120th birthday of the Rebbe. Shluchim from across London united to help the parade come to fruition, one that the UK won’t soon forget.

Starting by Yeshiva Gedola on Kingsley Way, the parade then passed through the streets of London, passing by Parliament Square and the famous ‘Big Ben’, spreading the message about the upcoming Yom Tov of Pesach to countless locals and tourists.

The Tanks then split up and going on mivtzoim near Chabad of West Hampstead, Chabad of Kentish Camden-Town, Chabad of Notting Hill, Chabad of Francophone Maida Vale, Chabad of Greenwich and Docklands, Chabad of Finchley, Chabad Lubavitch of Islington, Edgware and Golders Green.

Bochurim and anash manned the tanks, and over 1,000 packets of shmura matzah were distributed, tens of men donned tefillin, and dozens of packets of Shabbos candles were given out.

“Baruch Hashem, the parade was a massive success, and it accomplished the likes of which London has never yet seen,” Shneur Zalman Tiefenbrun told Anash.org.