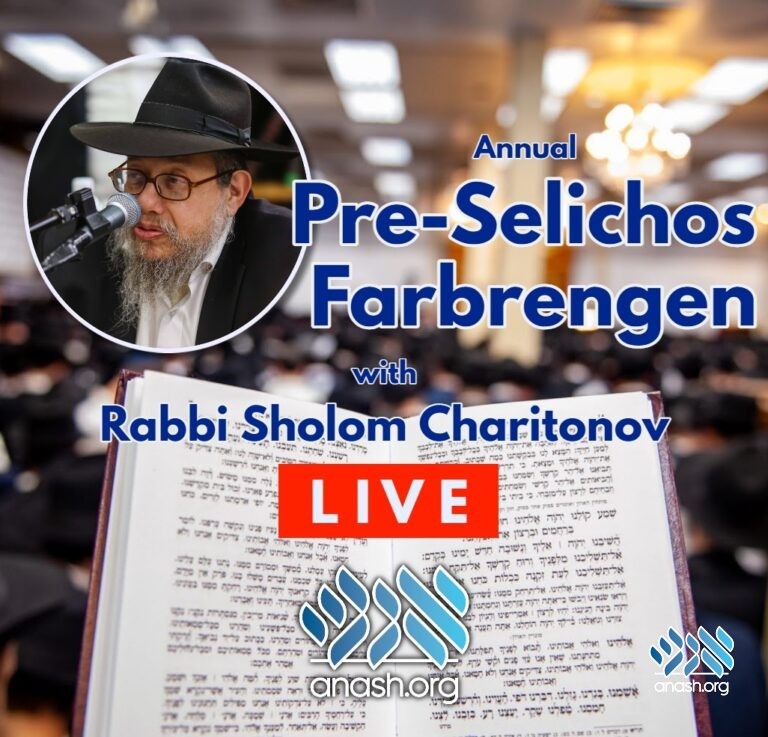 Join Live at 10:00 PM ET: The famous annual pre-selichos farbrengen with Rabbi Sholom Charitonov will be streamed live for the first time, to allow anash and shluchim from around the world to participate.

The famous annual pre-selichos farbrengen with Rabbi Sholom Charitonov, held in the Slavin residence near 770 and attended by hundreds, will be streamed live for the first time, to allow anash and shluchim from around the world to participate.

Every year, large crowds of bochurim, anash and guests pack the house of Rabbi Michoel Slavin, located only feet away from 770 Eastern Parkway, to join a pre-selichos farbrengen. Beginning shortly after the conclusion of Shabbos, and continuing until a few minutes before the start of selichos at 1:00 AM, the farbrengen draws hundreds who come to hear the perspective of Chassidus on selichos, the powerful lead up to Rosh Hashana.

When looking for a way to stream the farbrengen, Rabbi Slavin naturally turned to Anash.org, which proudly hosts farbrengens and programs throughout the year, alongside breaking news and updates that matter to the Chabad community.

The farbrengen will stream live exclusively on Anash.org on Motzei Shabbos, 20 Elul, August 28, beginning at 10:00 PM, and continuing until 12:45 AM, concluding in time for selichos.

“It is our fervent hope that we will merit to farbreng and say selichos with the Rebbe this Motzei Shabbos, and then the live stream will be used to broadcast the Rebbe’s holy words,” Rabbi Slavin said.