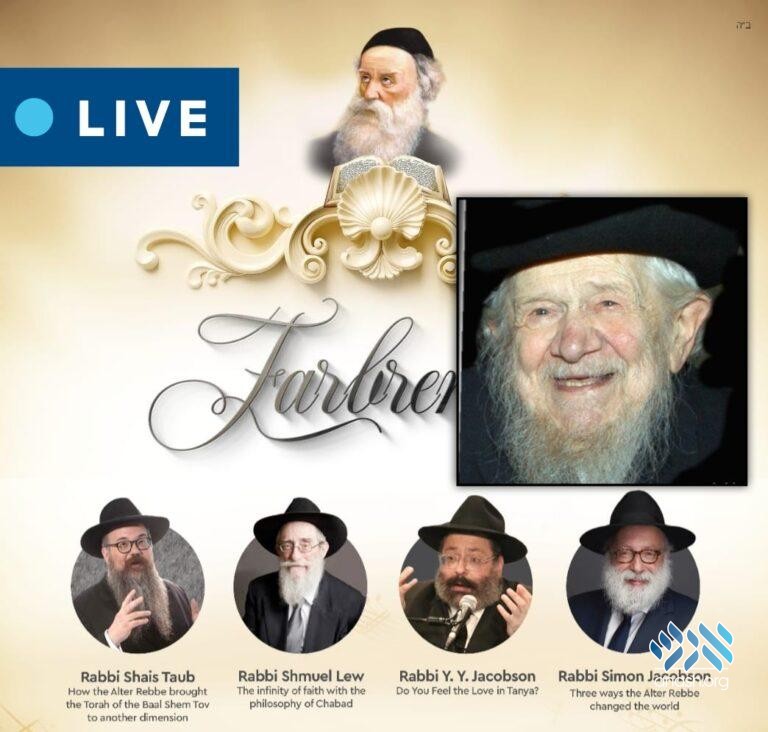 Join live at at 8:00 PM: A global virtual farbrengen marking the yahrzeit of the Alter Rebbe, and the 10th yahrzeit of the legendary mashpia and mekubal Reb Volf Greenglass, with renowned speakers and singer by Eli Marcus.

The event will feature renowned speakers and lecturers including Rabbi Shais Taub on how the Alter Rebbe brought the teachings of the Baal Shem Tov to another dimension; Rabbi Shmuel Lew on the infinity of faith with the philosophy of Chabad; Rabbi YY Jacobson on ‘Do you feel the love in Tanya?; and Rabbi Simon Jacobson on three ways the Alter Rebbe changed the world; and featuring niggunim with singer Eli Marcus.

Reb Volf Greenglass was born in Lodz, Poland, to Alexander chassidim. From a young age he was attracted to the derech of Chabad, and at age 20 he enrolled in the Tomchei Temimim in Otwock. When WWII broke out, he joined the group of Bochurim who fled to Japan and later China, until they reached Canada.

In 5695, the Frierdiker Rebbe sent the Baal Shem Tov’s holy Siddur to Lodz, Poland in order to show it to someone who promised a large contribution to Tomchei Temimim. The Frierdiker Rebbe stipulated that no one may touch the siddur except one of Reb Zalman Schneerson‘s students who will browse the Siddur while other looked on.

From among the students, Reb Volf was chosen to be the one to show the Baal Shem Tov’s Siddur. He once remarked that “I flipped through it from beginning to end and saw all the innovations in it.”

After arriving in Canada, Reb Volf established the yeshiva in Montreal, at the behest of the Frierdiker Rebbe. In his nearly 70 years as a mashpia, Reb Volf taught and inspired thousands of students to Torah and Chassidus, and exemplified hiskashrus to the Rebbe.

In additional to his immense Torah knowledge, Reb Volf was a treasure house of chassidic stories, and was fond of telling them by his classes and farbrengens.

In additional to his immense Torah knowledge, Reb Volf was a treasure house of chassidic stories, and was fond of telling them by his classes and farbrengens. After his passing in 5771, an 800 page Hebrew sefer was published containing hundreds of Reb Volf’s stories as some sketches of Reb Volf’s biography.