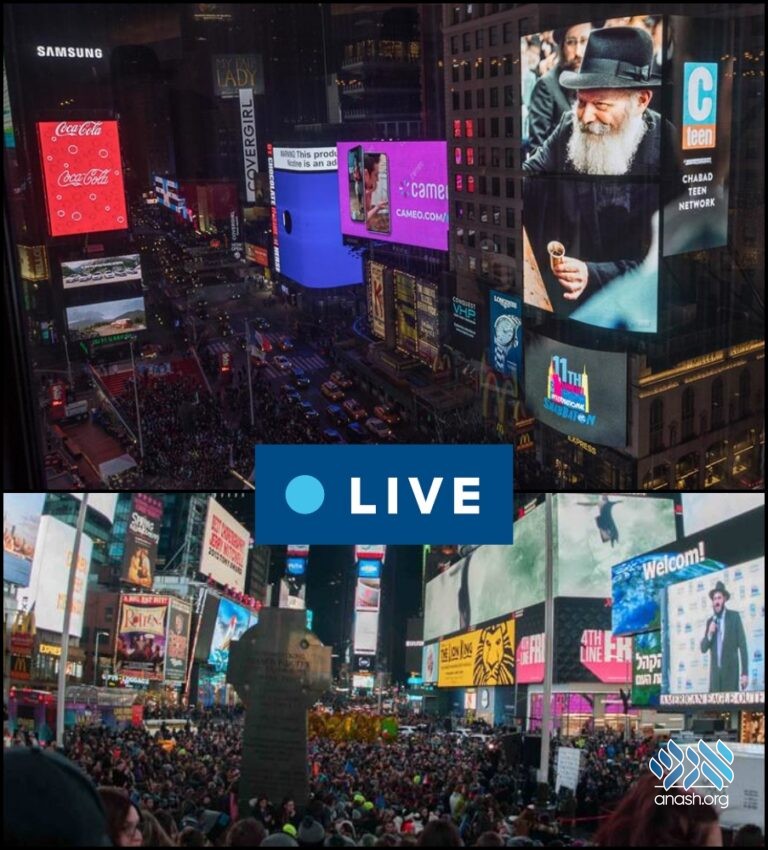 Join Live at 8:45 PM ET: Thousands of Jewish teens will gather in Times Square in an uplifting display of Jewish pride and unity; featuring a special Havdalah ceremony, meaningful inspiration and an exhilarating concert.

Thousands of Jewish teens will gather in Times Square in an uplifting display of Jewish pride and unity; featuring a special Havdalah ceremony, meaningful inspiration and an exhilarating concert.

The focus of this year’s CTeen Shabbaton is “Wherever, Whenever,” which hammers home the reality that we never leave our Jewish Identity behind, even as we tackle life’s most challenging moments. A highlight of this year will be the historic printing of a Tanya in Times Square.

“The Rebbe empowered us to bring holiness into even the darkest corners of the world,” says Rabbi Mendy Kotlarsky, director of Merkos 302 and vice-Chairman of CTeen. “Printing the Tanya in Times Square is a powerful demonstration that Judaism is relevant everywhere.”

After the printing of the Tanya is complete, the teens will study the Tanya’s profound perspective on Ahavas Yisroel and learn about the robust tools it gives Jews living in the modern age. The message fits the setting. With thousands of teens gathering together to sing “Shema Yisroel” and “Am Yisroel Chai” in Times Square, the idea of taking Jewish pride into the world has never been more relevant.

The concert is set to be headlined by Chasidic star Beri Weber. In addition to the Tanya Printing, the evening will see a video teaching of the Rebbe played from the Nasdaq screen, which rises an astounding 120 feet high, and was the largest screen in the world at the time of its completion. The thousands of teens will hear inspiration and greetings from CTeen’s Rabbi Shimon Rivkin and Merkos L’Inyonei Chinuch vice-Chairman Rabbi Moshe Kotlarsky.