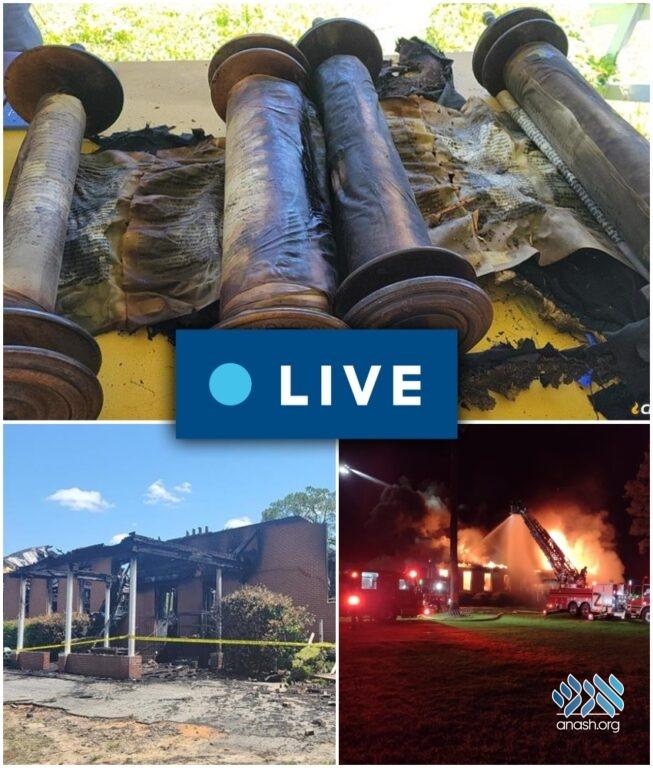 Live at 12:30 PM ET: The 2 Sifrei Torah burned in the devastating fire that destroyed Chabad of Tallahassee will be buried in a public ceremony. The burial will be followed by penning the opening letters of a brand-new Torah.

Rabbi Shneur Oirechman was utterly distraught one early morning last month as he beheld the devastation wrought upon the Chabad-Lubavitch center he directs in Tallahassee, Fla. On May 8, a blaze ripped through the building in the middle of the night, and by the time firefighters were able to get the fire under control, the building had been lost.

The 11,000-square-foot center that had hosted services, dinners, life-cycle events and so much more was no longer.

But for Oirechman, the most devastating moment was the sight of two charred Torah scrolls burned beyond repair. In Jewish tradition, a Torah scroll is afforded much reverence and love—so much so, that in the rare instance when one is burned or otherwise rendered unusable, it is given a proper Jewish burial, as befitting its hallowed status.

So while plans are already underway to rebuild the brick and mortar of the Chabad center, Oirechman and the Tallahassee Jewish community will escort the lost Torah scrolls to their final resting place this Sunday, June 19 at the Chabad Center of Aventura South under the leadership of Rabbi Mendel Rosenfeld.

The burial will be followed by penning the opening letters of a brand-new Torah scroll. The rabbis hope the ceremony, which will be broadcast live on Chabad.org will bring a sense of closure and comfort to a community grieving from a terrible loss.

Opportunity to Coalesce Around the Sacred

In Oirechman’s eyes, this event is not just about grieving and mourning, but rather an opportunity to coalesce around something sacred. “It’s not every day that such a tragic thing happens, and it is something that touches not just us here in Tallahassee, but the entire Jewish community. This is an opportunity for all different types of Jews to unite around the Torah and offer their support. We have received thousands of messages from all over the world, and it has been energizing to be given such a boost.”

Indeed, support has been pouring in from all over. “Grateful no one was hurt, praying that it was not arson,” tweeted Rep. Allison Tant, a Democrat from the 9th District, urging others to join her in donating to the Tallahassee Chabad.

Maor Elbaz-Starinsky, the Israeli Consul General in Miami, also talked about the need to assist in such efforts. “When such a devastating thing happens to a center that has been serving the community for the past 23 years—burned down with all of the Torah books and the Torah scrolls, with everything inside—the first thing is to show our support,” he said.

Plans are underway for the rebuilding of a far larger and even more inviting Jewish center. Artists’ renderings are already in place, and the event represents an opportunity to unveil future plans. “Chabad of Tallahassee and FSU [Florida State University] is a place of light and of joy,” said Oirechman, “so while we lay our cherished scrolls into the ground, we will break ground on a new center to continue and increase the light and joy that is our hallmark.”

Jamie Rosenheim, an alumnus from FSU and former president of student relations at Chabad, was effusive with his support of Chabad of Tallahassee and FSU and just how much light and joy resonated within its halls.

“Chabad FSU is the place where I felt the most love, support and guidance throughout my college experience,” he said. “Any person who walks in through the doors is set to make meaningful connections, have a joyous time and be uplifted with words of wisdom by Chabad’s positive and growth-oriented environment. As a former president, I was blessed to have had the opportunity to grow as a leader and honored to be part of such a beautiful and strong community.”