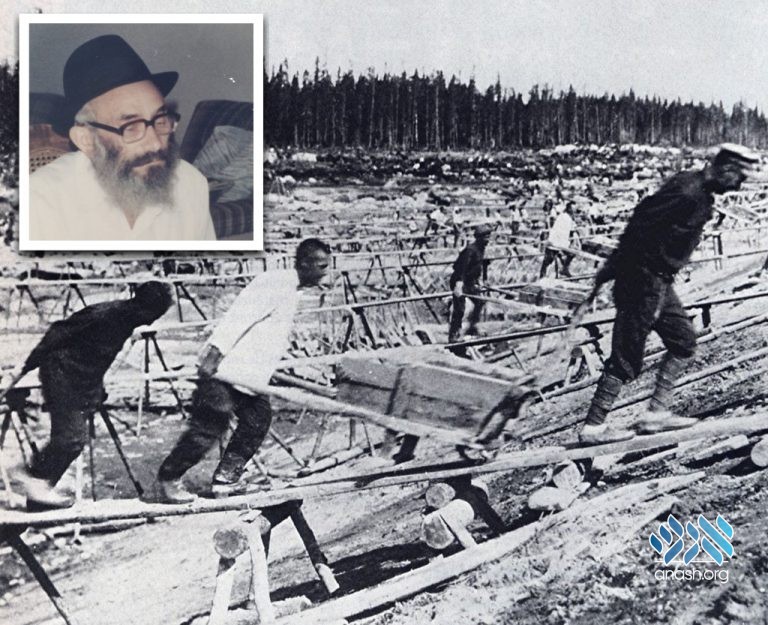 R’ Yechiel Michel Rapoport, a true example of mesiras nefesh in Soviet Russia who served two terms in Soviet prisons and Siberia, passed away on this day – Tiferes SheB’Tiferes – in 5743/1983.

Born in Pereiaslav, near Kiev in 5674/1914, Michel’s father had mesiras nefesh not to send him to public school (Shkolle) and was imprisoned for it.

After his Bar Mitzvah, he joined the Yeshiva Tomchei Tmimim in Kremenchuk. Soon, the talmidim were chased out of Kremenchuk and transferred to Ramen, near Haditch. Later, he was a talmid of Reb Yuda Eber, HYD in Vitebsk.

In his memoirs Reb Michel wrote about his wanderings as a yeshiva bachur; “We all knew that it wouldn’t take long and the KGB would catch us. It may take a while, but our “final stop” would be Siberia.”

Indeed, it didn’t take long and the Yeshiva in Vitebsk was disbanded. The older people associated with the Yeshiva were arrested and those bochurim under 18 were sent home. Reb Michel was at home when he received instructions from Reb Avrohom Mayorer to travel to Baku, Azerbaijan – some 1400 miles (!) away – and meet other bochurim there.

Upon arriving there they made their way to a local shul, before being chased out by the shamash, who saw bearded bochurim and was afraid of what would happen to him were he to allow them to stay and learn there.

So it was off to Kutaisi to try and organize the yeshiva there, and then to Zhytomyr, Berditchev, and Kursk.

In 5697/1937, seeing how many married chassidim who were managing yeshivas were being arrested, leaving widows and orphans, the leadership of the yeshivas decided to put older bochurim in charge. Reb Michel was put in charge of the Kursk branch, teaching 10-11-year-olds as well as 16-year-olds.

Sometime after Yud-Tes Kislev of 5698/1938, when a large farbrengen took place, he was arrested and sent off to Siberia, serving time in prison there. There, the terrible conditions of the prison took a toll, and he came very close to dying, if not for the kindness of a prison doctor who worked hard to save him from a terrible stomach ailment. After recovering from his ailment he was sent off to the work in the frozen wastelands of Siberia.

A while after finally being released from prison in 5706/1946, Reb Michel met other Chassidim and heard about the mass exodus from the Soviet Union. They were leaving as Polish refugees. Unfortunately, he could not get onto a train before the gates closed. He was then furnished with a new identity and passport by Reb Yonah Poltaver.

He was now Leibel Ceitlin.

Reb Michel now had to begin running from the KGB again, for the “crime” of trying to leave the Soviet Union. In the meantime, he married and had a son. The family then settled in Leningrad.

Soon, he became aware that somebody informed on him. R’ Michel left his wife and son and traveled all the way to Kutaisi again, but it wasn’t long before he was informed on again and the KGB caught up with him and arrested him for the crime of carrying a false passport. Being an ex-convict only made his crime greater and he was treated very harshly by his arresting officers and interrogators. He was charged with being a chossid of “Schneersohn” and with supporting chadorim, all of which was not allowed.

Ultimately, he was sentenced to ten more years of hard labor.

Reb Michel’s wife, Sarah, daughter of Reb Mendel Golombovitch, was born in Leningrad in 5678/1918. Raised with great mesiras nefesh by a father who made sure to educate his daughters in Torah and Chassidus, she survived the terrible bombings of Leningrad by the Nazis as well as the hunger there. As a young girl, she was active in helping Chassidim escape in 5706-07/1946-47 as well as supporting the Yeshiva in Lemberg. She gave her precious passport to freedom away to another girl, so she could remain with her elderly parents.

She had the zechus of being one of the few women who were arrested, sentenced, and served time in Siberia. She was arrested in 5710/1950 and was sentenced to ten years of hard labor, leaving behind a 1.5-year-old boy, Avrohom Yitzchok, who today lives in Toronto, Canada. He remained with his zeide Reb Mendel.

In 5731/1971, Reb Michel and his family were finally granted their exit papers and he arrived in Eretz Yisroel. Not one to rest on his laurels, he immediately got to work helping others involved in educating newly arrived immigrants from the Soviet Union. He settled in Nachlas Har Chabad in Kiryat Malachi and worked with Reb Mottel Kuzliner spreading Yiddishkeit in the yeshiva for immigrants from Georgia and Bukhara in the Soviet Union until his passing.

About two years after his arrival, Reb Michel made a personal siyum hashas. At the farbrengen that followed, his brother Henach jokingly asked why Heaven had delayed this siyum for 15 years (by his 5 and 10-year imprisonments). Does the Heavenly Court know what it’s doing? To which Michel replied, “Absolutely! I know exactly why I deserved it.”

He proceeded to relate how he and his friend were teaching in an underground yeshiva, when they were caught and taken to prison (the first imprisonment). The first part of the imprisonment check-in procedure was shaving off of their hair and beards. In Michel’s words, “When they shaved my friend’s beard off he cried bitterly and when they got to his peyos he fainted and rolled off his chair, whereas I didn’t faint.”

The above story highlights that “lost” in the mesiras nefesh aspect of Reb Michel’s life is his greatness in Torah – both nigleh and Chassidus.

Reb Michel passed away suddenly on Bais Iyar – Tiferes SheB’Tiferes – 5743/1983 while writing his memoirs. The final entry was about his plans for after 120 years when he will have to answer for his deeds and misdeeds on this world.

“The Malach that will judge me will certainly ask, you’re a chossid, yet I see that you’ve done this and that! A chossid doesn’t act like that. To which I will respond: Let the malach make the effort to check the KGB records, particularly case # 213 of the year 1951. He’ll see that not only was it “proven” that I was a chossid, but I even sat in prison and in labor camps for it!”

He was buried in the Chabad chelkah on Har Hazeisim.

Part of Reb Michel’s story was published in “In the Shadow of the Kremlin” by Artscroll in 5746/1986.