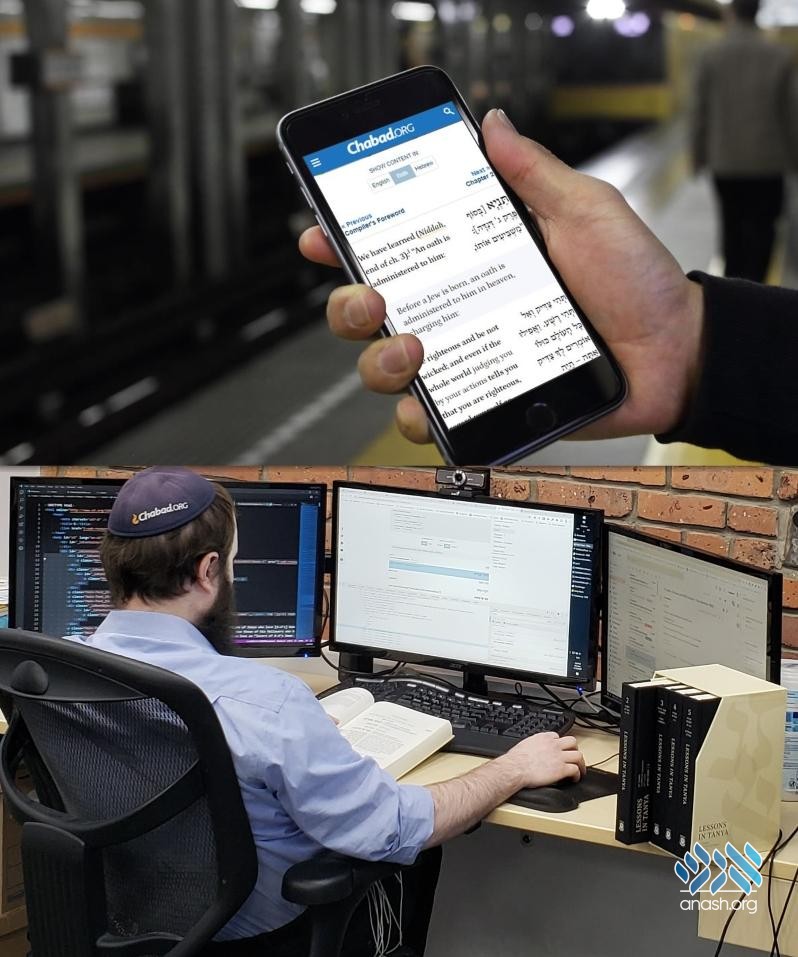 For 35 years, Lessons in Tanya has served as a invaluable resource for learning Tanya, and only recently was remastered thanks to a LA mashpia and thousands of readers. The new edition is now available free of charge online as well.

Since its initial release 35 years ago, Lessons in Tanya has been an indispensable key to accessing the Tanya, Rabbi Schneur Zalman of Liadi’s seminal work of Chabad-Lubavitch Chassidus.

Now, a remastered edition of Lessons in Tanya‘s classic English translation, commentary and elucidation is available online at Chabad.org, in coordination with the Kehot Publication Society.

It was launched as the Jewish community worldwide prepares to mark 19 Kislev, the anniversary of the liberation of Rabbi Schneur Zalman, the founder of the Chabad-Lubavitch movement, from his imprisonment in czarist Russia in 1798. The Chassidic holiday is known as the “Rosh Hashanah of Chassidism” and marks the completion—and beginning—of the annual Tanya study cycle.

Available online at Chabad.org as well as in Chabad.org’s Daily Study app, the remastered Lessons in Tanya boasts a linear translation and complete mobile integration. Crisp new fonts and layout provide a fresh look to the timeless manuscript. Users will appreciate the ability to choose from perusing the Hebrew or English texts separately, as well as the linear translation. Another option allows the user to hide the running commentary—ideal for someone with limited time looking to study just the text itself.

Written concisely and with enormous precision, the Tanya is rife with meaning, and unpacking the nuances of each word is a challenging task even for the most erudite of teachers.

The current edition received its impetus when Rabbi Mendel Cohen, a mashpia—Chassidic teacher and mentor—would spend hours preparing Tanya classes for his students at Yeshiva Ohr Elchonon—Chabad in Los Angeles, and often turned to Lessons in Tanya—or, as its Yiddish version is titled, Shiurim B’Sefer Hatanya. In time, this would lead to his playing a key role in preparing the remastered edition of the book, a benefit to countless students around the globe.

Authored by Rabbi Yosef Wineberg, Lessons in Tanya elucidates and makes accessible the mystical terms and concepts throughout the Tanya, and fills many gaps in what the terse Tanya text assumes to be the reader’s background knowledge. Lessons in Tanya’s creation began in 1960, when Wineberg began a weekly Tanya class in Yiddish on The Jewish Daily Forward’s WEVD radio station in New York.

Each week Saturday evening at 10:00 p.m., after the conclusion of Shabbat, Wineberg’s made-for-radio narrator’s voice would begin with his trademark greeting, “Ah guteh voch—a good week to the esteemed listeners and students of our lesson,” before launching into the week’s class. The class had the immeasurable benefit of the Rebbe—Rabbi Menachem M. Schneerson, of righteous memory—personally reviewing and annotating Wineberg’s notes each week before they were delivered on air, and so the lesson that was always replete with the Rebbe’s own added explanations.

These classes were later adapted by Wineberg, Rabbi Moshe Pinchas Katz and Rabbi Mendel Tenenbaum, members of the Vaad L’Hafotzas Chassidus (the Committee for Spreading Chassidut), into a Yiddish book titled Shiurim B’Sefer Hatanya which was published by the Kehot Publication Society. In the 1980s the work was translated into English by Wineberg’s sons Rabbi Sholom Ber Wineberg, who directs the Chabad House Center of Kansas City, Missouri; and Rabbi Levy Wineberg, dean at Hama’or Centre in Johannesburg, South Africa, and published as Lessons in Tanya.

In partnership with Kehot—and in close coordination with its director, Rabbi Yosef B. Friedman—Lessons in Tanya has been available online at Chabad.org since 1997.

As Cohen delved into Shiurim B’Sefer Hatanya, he recognized that in many instances, additional clarification was needed to bring the text completely in line with the Rebbe’s edits, as the initial radio scripts had now undergone a number of translations and adaptations from the original.

With Rabbi Schneur Zalman’s 200th yahrtzeit approaching in 2013, Cohen undertook a labor of love: he would dedicate at least 200 hours thoroughly updating the work and incorporating as many of the Rebbe’s annotations as possible.

“Our goal is to include as much as possible of what the Rebbe explained and amended,” says Cohen. “In some cases, the Rebbe instructed that something be removed from the class. In those instances, it’s important for readers to understand why it was removed. In addition, there are questions on the text that the Rebbe answered years later; these will now be included as well.”

He reached out to the staff of Kehot Publication Society, who were working on a reprint of Lessons in Tanya spearheaded by Rabbis Mendel Laine and Yirmi Berkowitz. With the copies of the Rebbe’s notations obtained from Kehot, Cohen noted wherever a correction was needed, and his work was folded into the new edition, which would contain a slew of features that would make the now-remastered elucidation even more accessible to students of the text.

Another source of input were many of the hundreds of thousands of readers who have benefited from Lessons in Tanya online since the original version was uploaded to Chabad-Lubavitch in Cyberspace in 1997 by the legendary Rabbi Yosef Yitzchok Kazen, “the founder of the Jewish Internet.” Many diligent students found typos that had crept into the original text, and these were shared with Kehot as well.

“We did whatever we could to make it more helpful, precise and user-friendly across the project,” said Rabbi Avraham D. Vaisfiche of Kehot, who incorporated Cohen’s notations along with Kehot Editor Rabbi Dovid Olidort.

A significant upgrade to the Tanya’s user-friendliness was adding nekudot—Hebrew vowels, as well as punctuation to the Hebrew text of the Tanya. In its original—as is the case in many Jewish works including the Torah and the Talmud—the Tanya contains no nekudot and precious few punctuation marks, presenting a challenge to readers who may not be familiar with the work.

The book is laid out as a linear translation, which is designed to clearly differentiate between the words that are translation of the Tanya proper, the added words which serve as bridges within the translation, and the explanatory commentary.

Back in Los Angeles, Cohen’s students have already benefited from the copious work that has gone into the remastered edition, with the added bonus of being treated by their teacher to a behind-the-scenes look at how the new Lessons in Tanya was created, even as the completed edition was being digitized 2,500 miles away.

Chabad.org’s developers—in close coordination with Kehot—went right to work adapting the new edition for online publication to replace the existing online edition. Using a purpose-built subroutine he crafted from scratch, Chabad.org’s lead developer Mordechai Sandhaus and his team extracted the text used for the print edition and processed the text so that it could be displayed based both on the daily Tanya study regimen and by chapter, and for the first time, the remastered version is being made available online, free to all.

“Our team has spent a significant amount of time turning this authoritative work into a living text,” said Sandhaus. “We worked around the clock, spending nights and weekends to make sure this was done in time for Yud Tes Kislev.”

“Kehot’s dedication to the mission that we share of disseminating Chassidut is really what made this possible,” said Chabad.org’s managing director, Rabbi Meir Simcha Kogan. “We’re grateful for their partnership.”

As the new Tanya study cycle begins, thousands of people who take part in its daily study will benefit from the remastered Lessons in Tanya, in print and online.

“This is a work that the Rebbe edited in its entirety,” said Vaisfiche. “As the only edition of Tanya with this much input from the Rebbe, many look at it at the authoritative elucidation on Tanya. It’s a work of tremendous value for the entire world.”