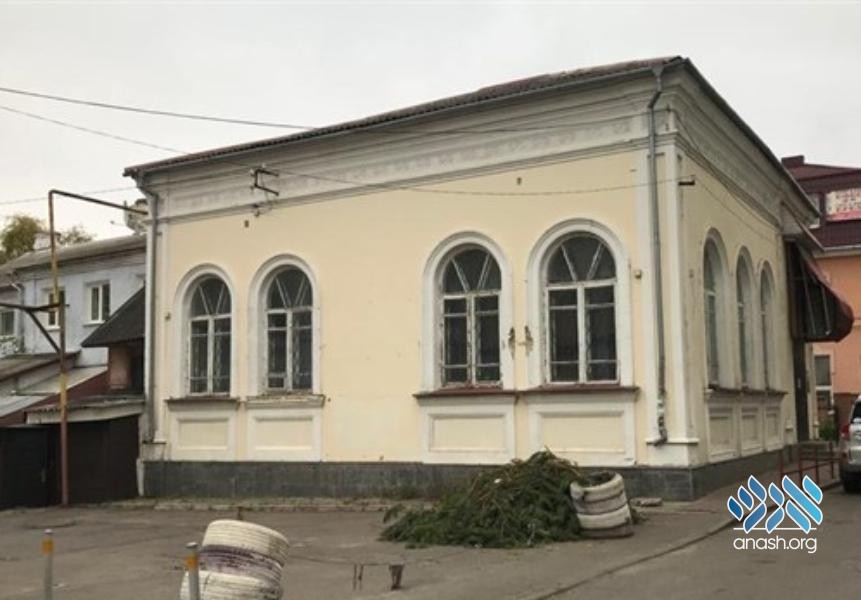 Just days before the Maggid’s yahrtzeit, the Shliach to Rivne, Ukraine, discovered that the town’s only shul was actually the “Alte Kloiz” used by the Mezritcher Maggid and his students.

This coming Shabbos, the 19th of Kislev, will be the 248th anniversary of the passing of Rabbi Dov Ber, “The Maggid of Mezeritch,” known as the second general leader of Hasidut following the passing of the Baal Shem Tov.

Although the Maggid is called after the town of Mezeritch where he settled after the death of the Baal Shem Tov, the Maggid and his disciples lived for a long time in the city of Rivne, Ukraine – 40 kilometers from Mezeritch.

During the Maggid’s leadership, the Hasidic movement became widespread and popular – this was possible mainly because he lived in the Podolia district, which was the center of Polish Jewry at the time. Many well-known Hasidic sects today were founded by the students of the Maggid.

In recent days, the Chabad emissary in the city of Rivne, Rabbi Shneur Schneersohn (a tenth generation descendant of the Ba’al Hatanya), has made a dramatic and surprising historical discovery: it turns out that the only synagogue that survived the horrors of the Holocaust and Communism, at 39 Shkolnia Street, where the Jews of Rivne pray today, is actually the “Alte Kloiz”- the old beit midrash used by the Maggid and his disciples.

So far there have been speculations on the matter, but only recently did it become clear that documents held by the city authorities confirm this.

Rabbi Schneersohn says that “the city of Rivne is known and famous as an important Jewish town where the Maggid of Mezeritch served as Maggid Meisharim before his leadership, and even more so after his leadership, and in fact for most of his years as leader of the generation he lived here in Rivne. Recently, while helping many Jews verify their Jewishness by finding documents in the government archives, we discovered a shocking fact: It turns out that the synagogue used by our community is exactly the same synagogue that was used by the Rabbi, the Maggid, and his students.”

“We sent the documents to professionals to certify their veracity, and after an in-depth examination and discovery of additional documents, it was clarified beyond any doubt that the synagogue building was indeed the building called ‘Alte Kloiz’ which was used by Rabbi Maggid of Mezeritch and, according to what had been read, was erected in 1760, 260 years ago. It is difficult for me to describe in words the great excitement that filled me and those involved in the work when we realized the magnitude of the discovery.”

According to the emissary, “we found signs of an ancient mikvah in one of the entrances to the building. According to evidence, this mikvah was used by the students of the Maggid.” According to what is known, the Maggid himself did not use the mikvah, due to his health condition and the instruction of the Baal Shem Tov.

Following the discovery, Rabbi Schneersohn decided to restore the old synagogue. “Since I arrived in the city, we have done our best to renovate the synagogue several times, but its poor condition still requires extensive renovation, lest it collapse, Heaven forbid. The roof, windows and walls are crumbling, and in the harsh winter water, snow and strong winds leak from them. The Admor Hazaken [Ba’al Hatanya] testified that, in the Maggid’s presence, miracles would ‘roll around under the table’, but there was no time to pick them up. All this took place here in the synagogue, a place where one can feel majesty and holiness, and which is now in danger,” warned Rabbi Schneersohn.

It should be noted that in addition to its spiritual value and historical importance, the synagogue also serves as the only building in the possession of the local Jewish community and is where most of the community activities take place, with another building being leased for the benefit of educational institutions.