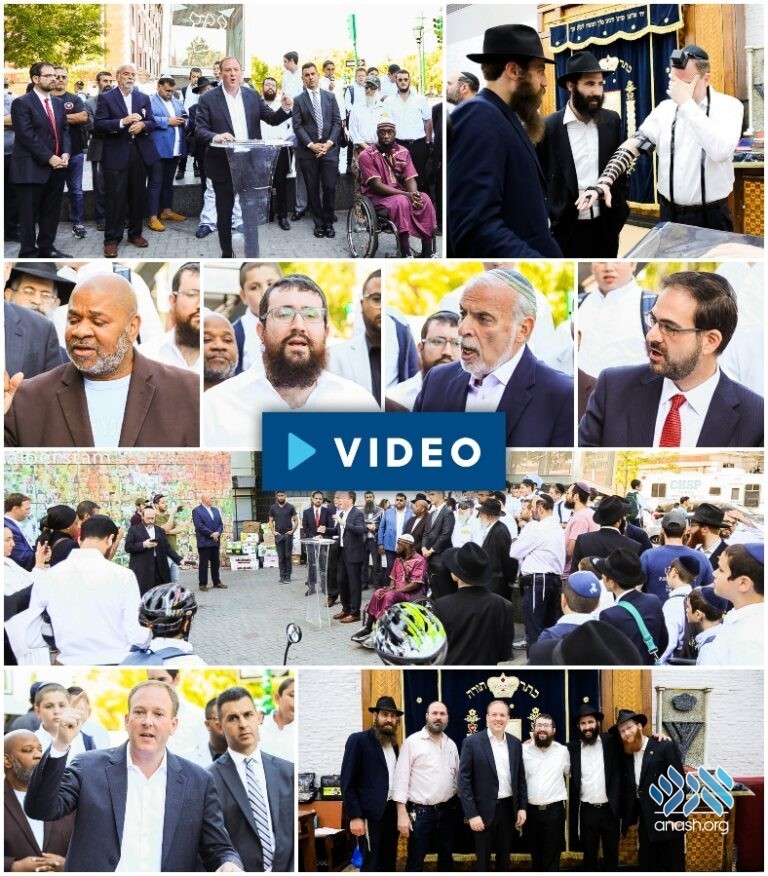 Congressman Lee Zeldin, the Republican candidate for Governor of New York, held a press conference in Crown Heights to denounce recent anti-Semitic attacks. The visit ended with tefillin in 770.

Congressman Lee Zeldin, the Republican candidate for Governor of New York, visited Crown Heights on Friday to hold a press conference denouncing anti-Semitism. The visit concluded with putting on tefillin in 770.

Congressman Lee Zeldin, who serves as the co-chair of the House Republican Israel Caucus and one of two Jewish Republicans in Congress, was joined by leaders from the local Jewish community and other local communities to speak out against recent violent antisemitic attacks, the spread of antisemitic hate throughout New York and the lack of serious consequences and punishment for those who commit hate crimes against Jewish New Yorkers.

“We’ve reached a point where people who might be wearing a yarmulka, or maybe they’re Asian, maybe they’re a Sikh cab driver, are being targeted with raw, violent, hate,” Zeldin said. “We should be free to walk our streets and our subways without fear of being attacked.”

“People who advance antisemitism, if they do not meet resistance, will continue to push forward with their hate, to recruit others, to be part of promoting antisemitic ideals and pursuits on our streets, in our classrooms, and in government,” he said.

“When I was growing up, from kindergarten through 12th grade, through college, through four years on active duty in the army, I never once encountered antisemitism, that’s how close we were. It should have been the first many generations ever to experience antisemitism. But these kids, they’ve already experienced it time and again on their own streets,” he said.

Local activist Yosef Hershkop, who was himself the victim of a violent attack, also addressed the press conference, speaking about his experience and the brutal beating he underwent right in front of his 5-year-old son. His attackers, like so many of the others, are still free on the streets.

After the conclusion of the press conference, Zeldin paid a visit to Chabad World Headquarters at 770 Eastern Parkway, escorted by a number of community members. There, he was invited to don tefillin and did so in the main zal of 770, before posing in front of 770’s iconic Aron Kodesh.