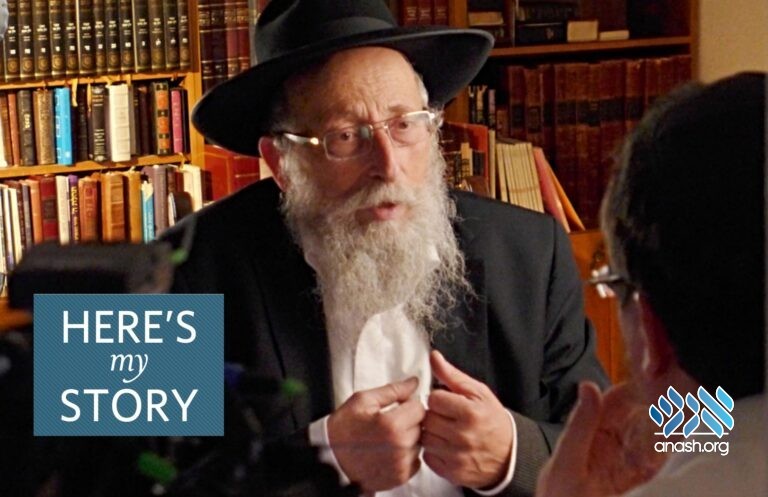 During a private yechidus, Rabbi Avraham Alter and Rochel Heber handed the Rebbe photos of their 4 children. The Rebbe personally wrote down the children’s ages on the back of each picture.

Rabbi Avraham Alter Heber is a community activist in Nachlat Har Chabad, where he has worked for many years as an educator. He was interviewed in February of 2016.

The first time I came to the Rebbe’s court was before Rosh Hashanah of 1965. I had come together with several of my peers from the yeshivah in Kfar Chabad, Israel, to spend the year studying Torah near the Rebbe.

The journey was long and expensive, and people rarely traveled from Israel to America back then. So although we had read about what went on there and heard recordings of the Rebbe speaking, we had never seen him in person.

In those days, guests who came to spend the holidays in the Rebbe’s court were able to have two private audiences – yechidut – with him; one upon arrival, and a second time before their return. We, however – the yeshivah students who had come for the year – were told that we wouldn’t be able to go into the Rebbe’s room just yet. The thinking was that we ought to first spend a little time around the Rebbe. After participating in his farbrengens and listening to his chasidic discourses, we would be prepared for a private audience, and more equipped to properly absorb the experience. So our first audience was set for four months after our arrival.

On the day of my audience, I was terribly excited. I finally went into the Rebbe’s room at midnight, and although I hadn’t eaten the whole day – the custom is not to eat, only to drink before meeting the Rebbe – I didn’t feel the least bit hungry.

I had prepared a letter beforehand. Over three pages, I wrote a brief biography, and articulated various questions and challenges I was struggling with in my efforts to live up to the chasidic way of life. The Rebbe read it attentively, and then began responding to each point in turn.

One question concerned prayer. At that time, the chasidic mentor in the Kfar Chabad yeshivah was Rabbi Shlomo Chaim Kessleman. He educated us to place extra emphasis on praying at great length, after making the appropriate preparations. I asked the Rebbe whether I should carry on in this way.

“Continue praying at length,” the Rebbe instructed, “and learn Talmud or the Halachic codes in depth, along with the earlier and latter-day commentaries.” In other words, I was to increase the intensity of my Torah studies, without detracting from my prayers.

Another question that had been bothering me concerned the abrupt transition we made each day in yeshivah; from the morning prayers, which were mainly about contemplating the divine and directing oneself to G-d; to the study of Talmud and Halachah, which have a completely different focus, and are concerned with more material, and decidedly non-mystical things. I felt that immersing oneself in that exoteric field of Torah studies, “could make a person forget about Who the Torah comes from,” as I put it to the Rebbe.

“But that is not what it says in Tanya,” responded the Rebbe, referring to the classic work of Chabad philosophy. He went on to explain that thinking about the deeper purpose of learning Torah – which is coming closer to G-d by comprehending His wisdom – is something to do when first sitting down to study, and only intermittently after that. Only the perfectly righteous, tzadikim, are capable of maintaining this intention even while studying. Others need to be fully engaged in the subject matter in order to study it with any depth.

In the middle of that year, I was again turning over some questions in my mind, and wanted to go for another audience. I put my request in writing, but the Rebbe’s response was, “Have you already completed the necessary preparations?” It was an answer that showed just how seriously the Rebbe took these audiences and the guidance he would give to young yeshivah students in them.

And so, the next time I came to see the Rebbe was before I returned to Israel. At the end of that audience, the Rebbe handed me a fifty-dollar bill. “My participation in your travel expenses,” he explained. He then added that it was an auspicious “Hakhel” year – the biblically mandated year of national gathering – and blessed me with success in my diligent and prolific study of Torah.

After returning to Israel, I got married, and after two more years studying in Kfar Chabad, my wife and I joined a group of young families who were moving to establish the base of Nachlat Har Chabad, a new Chabad community in the city of Kiryat Malachi. In time, I was appointed secretary of the neighborhood committee. In the next audience I had with the Rebbe, in the early 1970s, I wrote that my public duties were coming at the expense of my Torah study.

To this, the Rebbe replied by quoting the Jewish law exempting those active in communal affairs from certain religious obligations, such as saying Shema at the right time. He then continued: “On the contrary, this communal work will help you see greater success in the quality of your Torah study, despite the fact that you are learning for fewer hours.”

“No doubt,” he added in conclusion, “you have set times for Torah study, both on your own and with others, and may your communal work stand you in good stead.”

Several years after that, I came to the Rebbe with my wife, and we went in for an audience together. It was her first time, and the Rebbe intently perused everything she had written, and addressed every issue she raised.

Through the local branch of the N’shei Chabad women’s organization, she was then active in promoting the various mitzvah campaigns the Rebbe had launched. Among other things, she wrote about some of the difficulties that she was encountering, noting that sometimes she felt like the demands that were made of her were beyond her abilities.

Once again, the Rebbe’s answer proved – as in my first audience – that for him, strengthening one’s efforts was the only option. Quoting an adage of his father-in-law’s, the Previous Rebbe, he said that “when someone decides to go beyond what they are normally capable of, that very decision opens up new channels of energy, granting them more abilities than they previously possessed.”

Another thing concerning my wife was that her voice had become quite hoarse of late, which made teaching very difficult. Addressing this, the Rebbe raised himself up a little, and declared, with a smile, “May you leave any hoarseness behind in America, then go back to Israel and carry on there!”

In that same audience, she also gave the Rebbe two photos of our children – one featuring our two older children, and the second of our younger two. The Rebbe asked for their names, and after we told him each of our children’s names, while pointing at the images, the Rebbe flipped them over, and wrote a number on the back of each picture indicating the order of their ages. It was clear how important it was for the Rebbe to see these pictures and know who was in them. In that moment, we felt that the Rebbe was like a father asking about his own children.