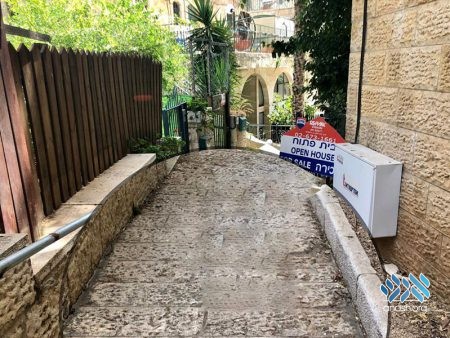 After nearly two years of unrelenting battle against a missionary center targeting youths in Yerushalayim – the largest such center in Israel – activists finally succeeded in getting the facility closed down.

After nearly two years of unrelenting battle against a missionary center targeting youths in Yerushalayim – the largest such center in Israel – Yad L’Achim has succeeded in getting the facility closed down.

The story began when rumors spread that Yariv Goldman, a known missionary, had set up a youth center that went under the innocent-sounding name Adullam.

Goldman and his team tried to hide their true identities and intentions, claiming to be an “attentive ear” to religious and chareidi youths.

After carefully monitored the center’s activities, at first surreptitiously, but the missionaries were cautious, making it difficult to gather incriminating evidence. After a few weeks, though, they let down their guard and were caught preaching Christianity to young people who arrived at the center.

At this point, they began operating openly against the center. First, it publicized quotes from Christian preachers in the United States singing Goldman’s praises, specifically his ability to reach out to people. “Yariv has a special gift, an ability to connect to people,” said one preacher. “He has a unique ability to deliver sermons about Yeshu.”

Some of these quotes appeared on the missionary group’s English-language website to help Goldman raise funds from churches and Christian donors abroad for his activities among Jewish youths. They were erased from the site as soon as it was publicized.

Meanwhile, manned teams who took up positions at Adullam to alert those entering the place as to its real agenda. It also worked to get other youth centers in Yerushalayim to sever ties with Adullam. Finally, it put pressure on the owner of the facility to end his contract with the missionaries.

In the end, with great siyatta D’shmaya, these efforts bore fruit and Jewish youngsters stopped frequenting the place. In addition, to Goldman’s distress, youths who had begun believing in “that man” spent time with Yad L’Achim activists who specialize in theology and came to understood their mistake and do teshuva.

If that weren’t enough, a month ago the owner of the building informed Goldman and his people that he was terminating his contract with them as of August 10, despite the great loss he was incurring.

Shortly after the missionaries were evicted, the owner sent a picture of the “For Sale” sign he had put up outside the facility, with a note reading: “I did my sacrifice, and daven to Hakadosh Baruch Hu that He should pay me back quickly.”