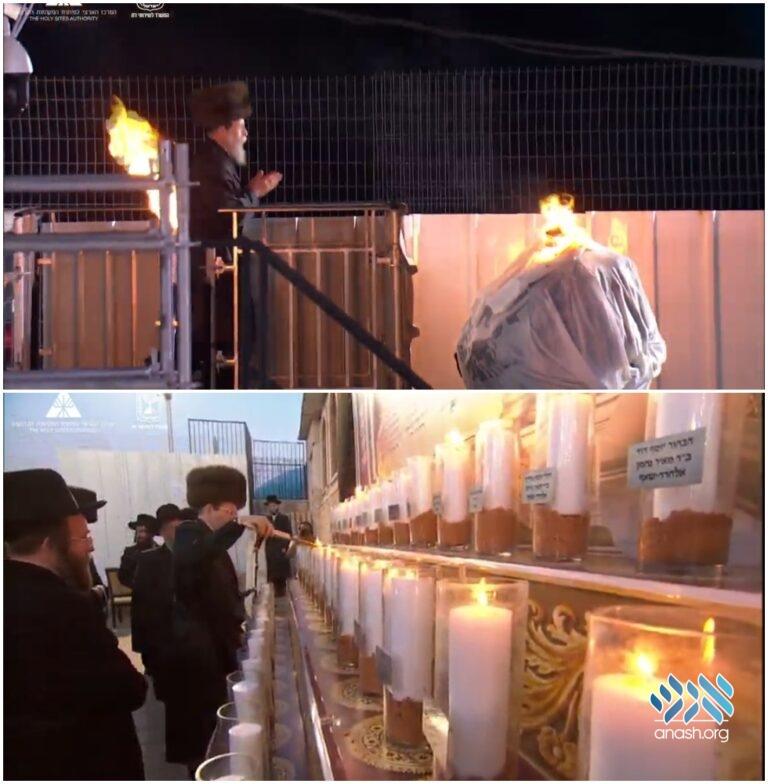 Article by Rabbi Mendel Itzinger: “Yesterday, as this special day began, feelings were bittersweet, a roller coaster of emotions. Yet, something in the live stream from Meron caught my eye.”

As a child, I heard of an old Yerushalmi Yid, who danced the entire Lag B’omer in Meron, stopping only to Daven.

Even when he paused to quench his thirst and recoup some strength he kept tapping his feet or moving his hands to the rhythm of the Nigun.

When did it begin? Why? One day I’ll give a Shiur on this… But it is less relevant for today. Today is about joy. Unbridled joy.

Many people make the mistake of thinking that the Joy is because Rebbi Shimon bar Yochai commanded us to rejoice on the day of his Histalkus, but the truth is the other way.

What is special about ל”ג בעומר?

It is the day we accept (הוד) that as much as we understand, we will never fully understand (שבהוד).

Everything we know and understand, is only to the best of our knowledge.

What is really happening is many magnitudes higher than we can ever comprehend.

When one resigns themselves to that fact, they realise that at some point they require belief. Belief, and Trust.

Trust, that at the end of the day – it is the epitome of knowledge, He who is מדע יודע and ידוע all in one, and He who is in fact infinitely higher than knowledge, who really runs the world and knows what needs to happen and why, and how we should act. He told us how, and we are preparing to again accept his commandments.

That concept of belief, and the recognition that things will always run in ways we will never fully grasp.

That recognition, or perhaps resignation to that fact, brings a calmness and thereby uncontainable joy.

Last year, even the Yid that dances the twenty-four hours straight, stopped dancing.

And yesterday, as this special day began, feelings were bittersweet, a roller coaster of emotions.

It was hard to feel the same. The moments of Joy are even mixed with guilt.

Hundreds of Yidden have the first Yartzeit today.

So many, for boys so young.

I watched a live video of the שמחה in מירון. And I could only imagine what I was feeling was amplified by those physically there.

Certainly by those in leadership.

Yet, something caught my eye.

The Boyaner Rebbe, the conductor of the event, was for a brief moment, dancing back and forth, his feet lifting off the ground, as he celebrated the joy of Rebbi Shimon.

A ‘Ruzhiner Rebbe’ jumping for joy is not something you see every day. Not even on ל”ג בעומר.

It dawned on me that, despite the pain, the steward of the event understood that Rebbi Shimon wants joy.

And this year, of all years, this conductor, a man who worked on himself for fifty-years not to show outside emotion, made such an effort to be joyous, that even he lost control of himself in his joy for a moment.

Later I heard that the Rebbe of Toldos Aharon went into the crowd of his Chassidim to dance with them together. Encouraging their joy in ways that only a Chossid can understand what it would mean to them.

True, הדלקות are not our Minhag. True, our דרך is different to that of Ruzhin and Toldos Aharon. But we don’t have to follow the Minhag to appreciate the message.

Joy when not impossible or inappropriate is always something we need to strenuously strive for. Despite natural feelings.

When we understand that we will never understand, when we trust because we know that everything that happens is for a reason.

When we resign ourselves to the fact that we are in good hands and all we can do is make Keilim, we remove the pressure of worry and concern and our joy breaks through.

When the scene of a father standing by the Zaka truck talking to his children “I don’t know if you are in here, but I haven’t been able to locate you all night”, keeps flashing before my eyes, I realise that I cannot ask others to rejoice.

When the image of a father who came to Meron with his three boys now stands next to one of them desperately trying to call the remaining two, the look in his eyes telling you reality is sinking in… stands before me each time I hear “ואמרתם כה לחי” I realise that preaching joy is only fair in the hypothetical.

So whilst I cannot ask it from others, I can, for myself, learn from those who broke through their own pain,

their reaction succeeding in lifting those around them.

As we begin the final two weeks of preparation for קבלת התורה, we can learn from those who were able to put their feelings aside by reaching deeper and accepting He who runs the world. To channel todays joy and accept upon ourselves one new Mitzva or Hiddur we will do, to further condition our Kabolas Ol – our acceptance that the Eibisher knows what we should be doing, and so we will do it regardless of desire.