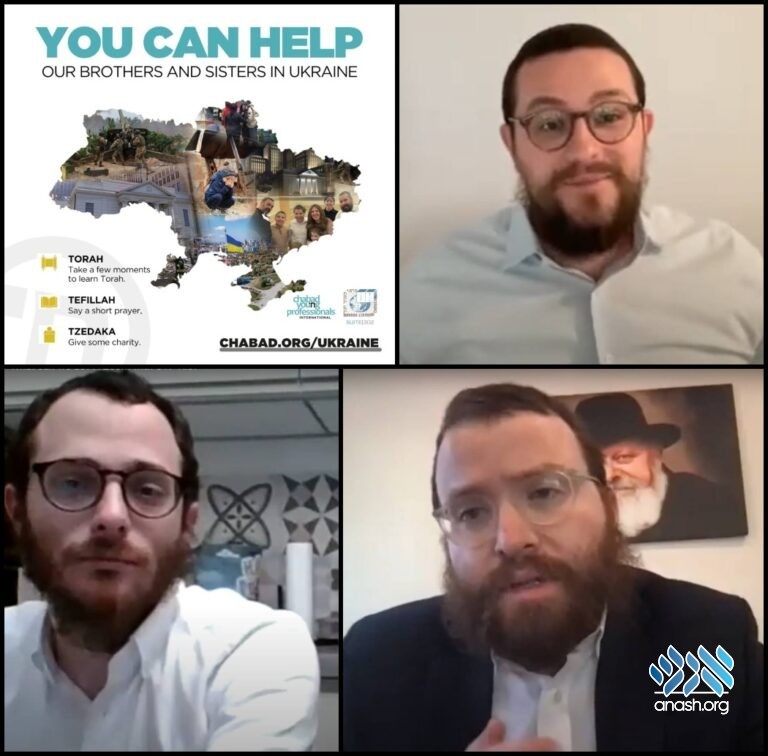 Rabbi Ariel and Cherrie Markovitch, CYP Shluchim in Kyiv, inspired hundreds of young professionals with their story of resilience and devotion during a Zoom program held to support the Jews of Ukraine with Torah, tefillah and tzedaka.

As the first few days of the carnage in Ukraine unfolded, thousands of Jews across the world looked on anxiously, worried for their brothers and sisters trapped in the crossfire. “What’s really going on? Are people staying or escaping? How are they getting out?” were questions swirling around everywhere.

Rabbi Zalmy Dubinsky, who together with his wife Mushka, co-directs Chabad Young Professionals of Raleigh, North Carolina, was worried like everyone else. Fielding concerned calls from community members, he figured he had to do something. That’s when he remembered his colleagues, the CYP shluchim in Kyiv, Rabbi Ariel and Cherrie Markovitch, a dynamic young couple who, until just a few days prior, had been doing the same thing he was doing in the Ukrainian capital.

“I thought about Ariel, his family, and their community and what they must be going through right now. I decided that we must reach out and see how they’re doing, offer support, and get their perspective on this madness,” said Dubinsky.

After reaching out to Rabbi Beryl Frankel, director of CYP International, and discussing the options with fellow CYP shluchim, the CYP team at Merkos 302 pulled things together in a flurry of activity, arranging speakers, along with professional marketing tools for all shluchim to use. And so, on Thursday, March 3, hundreds of young adults from across the globe gathered together on a Zoom call with the Markovitch’s for an evening of Torah, tefillah, tzedakah, and of course, to hear a first-hand account from the front lines.

“Many people are surprised to hear that there is such a flourishing young community here in Kiev, so we’re always happy to share our story and connect with other young professionals around the world,” said Ariel Markovitch. “It was obviously particularly important now, to bring awareness of what’s really going on here in Ukraine and let people know how they can help.”

By the time the weathered young couple was able to get on the Zoom, they were connecting from Nice, France, where Cherrie’s parents, Rabbi Yosef Yitzchak and Shterna Sara Pinson, had taken in their daughter’s family with their newly earned refugee status. “Cherrie commented to the crowd how astounded her ninety-year-old Russian grandmother was to see her. ‘I left that part of the world so many years ago with nothing but a small satchel, and I never thought I would see my granddaughter do the same so many years later.’”

All told, the Markovitch’s were nothing but the picture of positive energy. “People were blown away by the courage of this young couple helping out anyone and everyone they could in the war-torn city. Huddling in shelters and then running around to provide food and shelter to friends in the moments between, it really opened people’s eyes to the everyday dedication of the shluchim.”

After a few days of being holed up and unable to venture outside for safety reasons, the Markovitch’s realized that they would be of more help outside than in. That’s when they began their miraculous escape that saw them whisked away to safety from the bombs of Kyiv with a small convoy of cars across the border to Romania, then to Budapest, and finally with family in France.

In one particularly chilling anecdote, Ariel and Cherrie described their efforts to help others escape the city. To secure a spot on prearranged buses leaving the country, prices soared to a thousand dollars a head. From their relative safety in France, the Markovitch’s have been working around the clock to raise funds and get as many people on board as possible. “You hear of such things from days bygone, and here they are, literally saving lives as they pluck people out of the city and to safety.

“After hearing such incredible efforts, many on the Zoom were asking how they could help. We managed to raise a nice amount of funds to help more people secure safe passage.” This, of course, is on top of Merkos’ overall efforts at the Ukraine Jewish Relief Desk.

Rabbi Getzy Markowitz, who together with his wife Shaina, co-directs CYP of the Montreal Torah Center, delivered a Dvar Torah to kick off the evening. Thereafter, Rabbi Shmuli Levitin, who with his wife Esta, co-direct CYP of Hoboken and Jersey City, recited Tehillim with the crowd and shared his personal recollections of Ukraine. Like many other young Chabad men, he spent many summers volunteering in the various youth programs arranged by Chabad in Ukraine. It was particularly poignant when Rabbi Levitin reported on two people he still keeps in touch with in Ukraine and for whom he had personally raised funds to help safely leave the country.

“The resilience of Chabad shluchim and their extreme devotion was on full display,” said Rabbi Moshe Kotlarsky, Vice Chairman of Merkos L’inyonei Chinuch. “It was our privilege and honor to galvanize people together to hear from these incredible shluchim and be inspired to support what they do, as well as taking their own initiatives.”

So are the Markovitch’s planning on staying in France? Not at all! Ariel shared that he and his wife are committed to the Kyiv community members and are looking forward to returning and rebuilding. He even shared the hopeful wish to go back to Kiev for Purim and read the Megillah for the community.

Watch: What can we do? A Zoom with CYP Kiev

To support the Shluchim of Ukraine and Chabad’s relief efforts, reach out to the Ukraine Jewish Relief Desk at Chabad Headquarters [email protected] 718-977-5503 UkraineJewishRelief.org