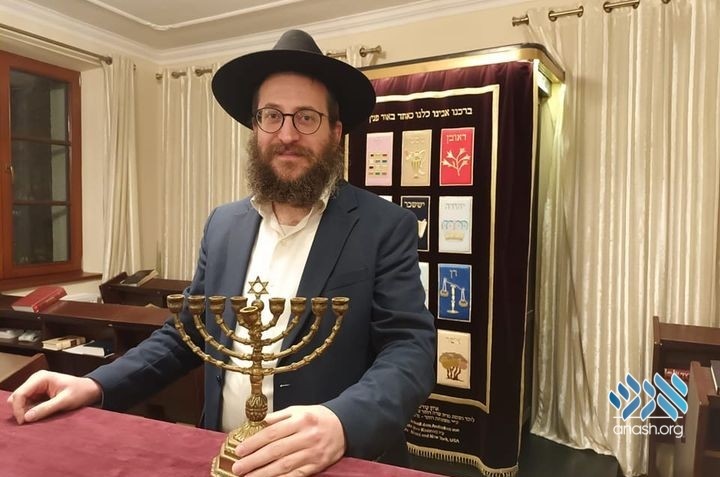 84 years after Kristallnacht, a golden menorah stolen from the Great Synagogue of Nuremberg was returned to shliach Rabbi Eliezer Chitrik with a personal apology.

On Kristallnacht 1938, thousands of shuls, homes, and shops were destroyed throughout Germany. Among them, the Great Synagogue of Nuremberg was ruined by a group of young German rioters. One of them, a German boy, took a golden menorah from the synagogue and kept it.

Just a few weeks ago, that boy’s nephew visited Rabbi Eliezer Chitrik, shliach of the Rebbe to Nuremberg. He handed him the golden menorah with the following letter:

“My uncle took this menorah from your burning synagogue. He was 10 years old at the time, and, at the time, he paid for the theft by beatings he received from his father. The father demanded that the menorah be returned to the Jewish neighbors, but over the years the community fled, disappeared, and was destroyed. I am now happy to return the menorah to the people to which it belongs. Please accept it as a sign of peace and reconciliation, and I wish success to you and your community in Nuremberg.”

Asked what this story meant to him, Rabbi Chitrik responded:

“84 years have passed, but the stolen item has been restored. It’s symbolic to me since this is exactly our mission in Nuremberg today: to return the light of Yiddishkeit to any person from whom this light was stolen.”