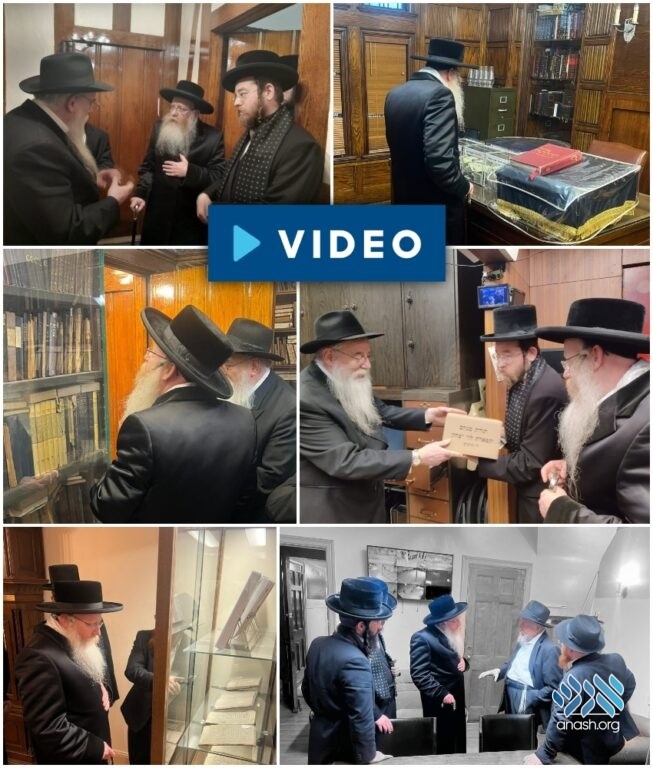 Harav Dovid Moshe Rosenbaum, the Kretshnif Rebbe of Kiryat Gat, paid a visit to 770 on Tuesday, where he was shown the Rebbe’s room and the library.

Harav Dovid Moshe Rosenbaum, the Kretshnifer Rebbe of Kiryat Gat, paid a visit to Chabad World Headquarters at 770 Eastern Parkway on Tuesday, accompanied by a group of gabboyim and Chassidim.

Harav Rosenbaum was greeted by Rabbi Chaim Boruch Halberstam of Vaad Bedek Habayis and Rabbi Mendel Eisenbach, who directs the Chabad House in 770. Rabbi Halberstam opened the Rebbe‘s room, especially for the visitors and showed them some of the unique items in the room. Harav Rosenblum then spent a few short moments davening in the sacred spot.

They then headed to the Central Chabad Library, where Chief Librarian Rabbi Berel Levine gave them an extensive tour of the exhibitions.

The group then went back to 770, where they were given a tour of the WLCC welcome center and shown how the Rebbe’s farbrengens were broadcast to the entire world before the days of the internet. Rabbi Halberstam then gifted him with a set of Toras Menachem Tiferes Levi Yitzchak, the Rebbe’s commentary on his father’s Torah.