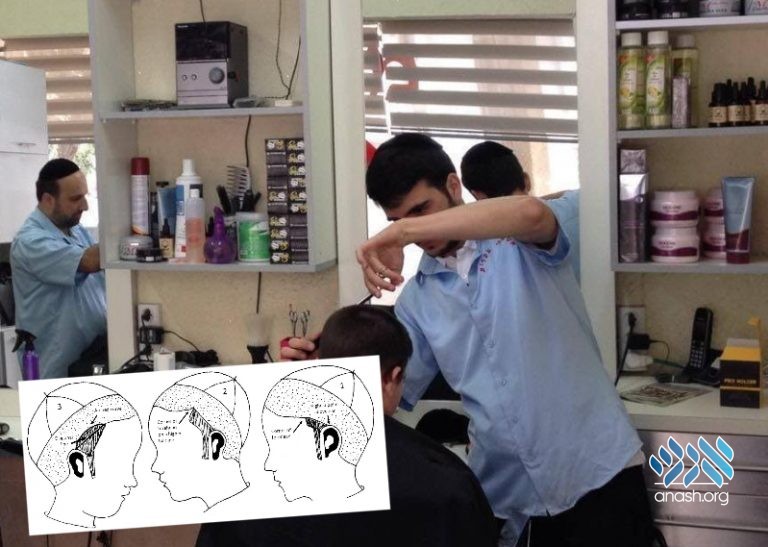 I am giving haircuts for Yom Tov. How much hair must I leave for the peyos?

It is prohibited min haTorah for males to round off the corners of their head, referring to removing the hair of the temples (sideburns). Explanations include that it resembles the practice of idolaters and that it follows the ways of gentiles, though others say that the reason is not known and does not affect the halacha.

The area of the peyos is the hair below an imaginary line drawn diagonally from the upper “corner” of the forehead to the highest point in the round hairline above the ear [figure 1]. (For someone with a raised hairline, that “corner” is slightly higher and the area is larger [figure 2]. Some poskim maintain that all people should treat that area as peyos even if one’s actual hairline is lower.) The custom is to leave an extra arch of a finger width above this line as a precaution [figure 3]. This area extends downwards according to some until the top of the cheek bone, and according to others until the bottom of the ear, under which the beard begins.

Poskim dispute whether only shaving is prohibited or even cutting it close to the skin with scissors, and Shulchan Aruch writes to be stringent. Thus, the hair in this area should be left long enough to “fold over,” which is approximately a ¼ inch. This can be accomplished by using a #2 clipper or higher.

What about pulling out individual hairs? While some Rishonim say that leaving a width of 40 hairs in the area of the peyos suffices, others hold that removing or plucking even two hairs is a transgression, and Shulchan Aruch rules like the stringent opinion. One must therefore not cut any hair in the peyos area with less than a #2 clipper, and when trimming around the ear with scissors, care must be taken not to trim any hairs shorter than a ¼ inch.

Although the minimum length of the peyos hairs is a ¼ inch, the minhag is to leave thicker and longer peyos. It is also a beautification of the mitzva for them to be noticeably longer than the rest of the hair, as an obvious sign of being a Yid.

Some communities don’t trim their peyos at all or leave them very long, however minhag Chabad is to cut the peyos at the bottom of the ear, and men with beards trim them so that they don’t mingle with the beard hairs, since the peyos and the beard have two separate sources in kedusha. (Some address this by putting the peyos behind the ear.)