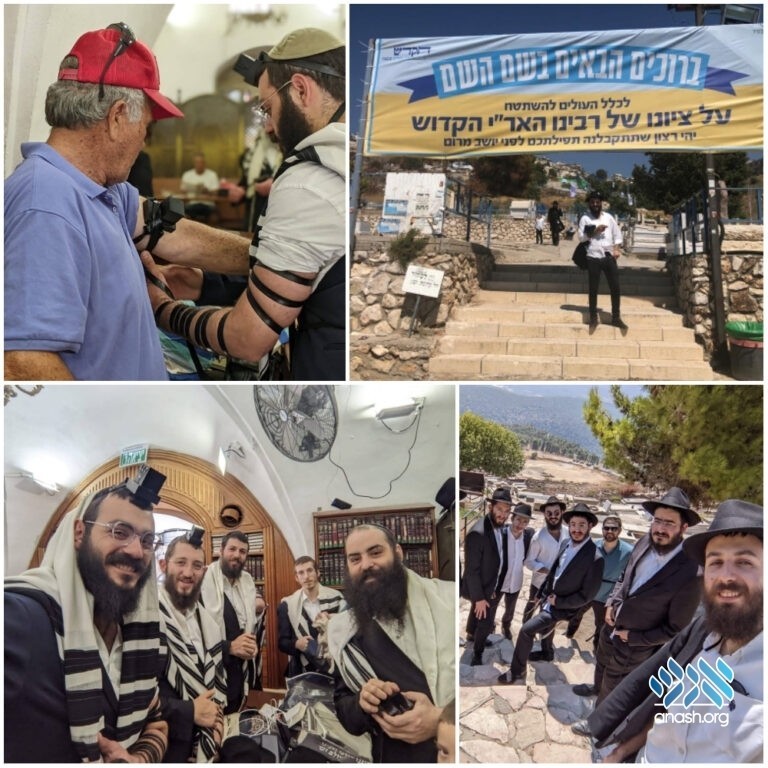 After an inspiring farbrengen, yungerleit who are part of the Kolel Keter Shaul in Petach Tikva decided to take a group trip to visit the Arizal’s kever to daven on his yahrtzeit and to other holy sites in the North of Eretz Yisroel.

Kolel Keter Shaul in Petach Tivka has gained a reputation that reaches far beyond the boundaries of the city where it is located. Despite it being a relatively new Kolel, it’s already noteworthy among Chabad’s impressive list of similar institutions.

This is mainly due to its intensive learning curriculum, which includes an in-depth study of Chassidus. Additionally, the Kollel is known for its community involvement. The Kolel yungeleit volunteer during evenings and before Shabbos and Yom Tov to assist the city’s Shluchim in their activities, under Petach Tikva’s Head Shliach Rabbi Osher Duetsch.

This past Shabbos – Shabbos Chazak, at a farbrengen that took place at the Hadar Menachem shul, a suggestion came up that the Kollel’s students journey together to daven on the yahrtzeit of the holy Arizal.

Once the idea was posed, the Kollel’s sponsor and well-known philanthropist, Rabbi Shuki Gur, took the project on himself and even joined the yungeleit on their trip. There he was able to witness firsthand how dedicated the students are to their learning, fulfilling the words uvelechtecha vaderech, under the guidance of their dedicated Rosh Kolel Rabbi Shaul Deutsch of Moscow.

As the idea developed, the Kollel decided to visit many other kevarim on their way to the Arizal, making this into a “Journey of Prayers through the Galil” as one Kollel head referred to it. The yungeleit first traveled to the resting place of the holy Tana, Rabbi Shimon Bar Yochai in Miron where they davened Shacharis. the men then continued on to Tzfas, where they immersed in the mikva of the Holy Arizal, and davened at the resting place of Rabbi Yisroel Arye Leib Shneerson O.B.M.

From there they joined the large gathering of people who congregated at the Arizal’s kever for his yahrtzeit. They davened for the esteemed Gur family, who support the Kollel as well as for the entire Chabad community of Petach Tikva which encourages the growth of the kollel and follows the Kollel’s success with great joy.

This year was the Arizal’s 450th yahrtzeit, over the years it has become an annual tradition, where thousands of visitors come to the Arizal’s kever on this special day. People stream into Tzfat from all over the world to daven at the gravesite of the holy Tzaddik.