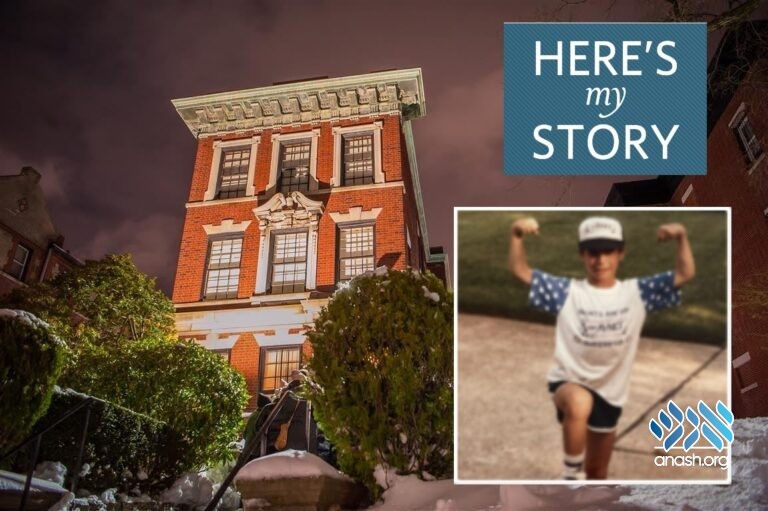 After Mrs. Leah Englander’s three-year-old son was rushed to the hospital, the doctors informed her that the boy would be partially paralyzed for life. Their only way to reach the Rebbe was to ring the bell at the Rebbe’s home on President Street, in the middle of the night.

Mrs. Leah Englander is a retired ultrasound technologist who resides in Cedarhurst, Long Island. She was interviewed in the My Encounter studio in January of 2014.

I always had a love and a longing for Judaism. I was a little girl from a traditional Conservative family, but when I would see Chasidic-looking people I would say, “Oh, they’re so beautiful,” like I wanted to be like them. When I grew up and got married, I lit Shabbat candles and kept a kosher home but I was not Shabbat observant.

And then my brother Levi Reiter and his wife Raizel became Lubavitcher chasidim. Through them, I started coming to classes in Crown Heights every Sunday and then I became a lot more observant.

I went on to have three children, and before each of them was born, the Rebbe gave me a blessing for everything to be okay. At one point, he told me I would have tremendous nachas from my children, and as it turns out, they are all amazing, thank G-d.

But when my middle son, Yehoshua Leib, was one year old, he had his first seizure. The doctor felt it might have been caused by a fever, but then there was another mild seizure, maybe six months later. Apparently, he had a kind of seizure disorder. Then one night in 1981, when he was nearly three years old, I went in to check on him. Even in the dark, I could just tell something was wrong.

I turned on the lights and his face was blue. I don’t know how much time he had been in that state, but by the time I got there, he was totally limp and his breathing was very shallow. We picked him up and ran outside, hoping that the cold night air would revive him, but nothing did. We called the ambulance.

At the hospital, while the doctors were checking him out, they mentioned something, in this matter-of-fact way, about his paralysis.

“Didn’t you notice?” they said. “Half of his body is paralyzed.” They showed me that his eye was drooping, and so was his lip. They picked up his hand and it just fell down. “Yes,” they confirmed, “he’s paralyzed.”

I immediately called my brother and told him what was going on, and that I need a blessing from the Rebbe.

He gave me his word: “I’ll take care of it.” Just hearing that gave me a lot of confidence, because my brother always comes through.

I didn’t know at the time, but it wasn’t so easy to accomplish. By the time we spoke, it was 10:30 PM on a Saturday night, and the Rebbe was already home after Shabbat. My brother later told me that he called everyone in the Rebbe’s secretariat to get the message through. But, understandably, they were hesitant to disturb the Rebbe when he was home for the night. They said they would try their best, but couldn’t promise to give over the message at that hour.

Back in the emergency room, I asked the doctors, “What are my son’s chances of recovering?”

“Well,” they explained, “with this type of paralysis, he may get better to some degree and recover some movement, but it will never be back to normal.”

Meanwhile, my brother knew how urgent the situation was. The Rebbe needed to know, that very night, what was happening with my son. And so, he decided to go straight to the Rebbe’s house himself.

Normally, there were yeshivah students stationed nearby who kept an unofficial watch over the Rebbe’s house, making sure that there were no disturbances. So my brother drove over with a friend and sent him out of the car towards the Rebbe’s house. The students went over to question the friend, and while they were distracted, he slipped past and went straight to the Rebbe’s front door. Now his heart was pounding so hard that he thought he would faint, so he just closed his eyes and rang the bell.

Lights came on inside the house, here and there, and after a couple minutes, the front door opened up, and it was Rebbetzin Chaya Mushka. My brother had never even seen the Rebbe’s wife before.

“Please come in,” she offered, inviting him into the house. “How can I help you?”

He was choked up by that point, but he went ahead and told her everything. As he was telling her about what was going on with my son, she gave a deep sigh, “Ach, ach…” and it was obvious how intensely concerned she felt. It all made a lasting impression on my brother — the regal look in her face, and the way she became completely invested in what we were going through.

She asked for my son’s name and for my brother’s name.

“I will tell my husband,” she said.

I don’t know exactly when the Rebbe actually gave his blessing — the Rebbe’s secretary called my brother back in the morning to say that he had — but we saw the results in the hospital well before then. At around 1:20 AM, my son suddenly started moving again. “I don’t believe it,” the doctor exclaimed. “I don’t believe it!” It was like he just completely recovered.

There were some other specialists there, and I remember them asking, “He’s really moving? On the paralyzed side of his body?!” They were amazed.

I told the pediatrician, who was Jewish, that it was because of a blessing from the Lubavitcher Rebbe. “Well,” he replied, “you might be right about that because we’ve never seen anything like this before.”

After that, every few months we would go to a pediatric neurologist to have my son checked. He loved when we would come because Yehoshua Leib would come running in and jump up on the examination bed. I think it was a thrill for him to see a child who had recuperated so completely. Of course, it was a miracle; it was from the Rebbe’s blessing.