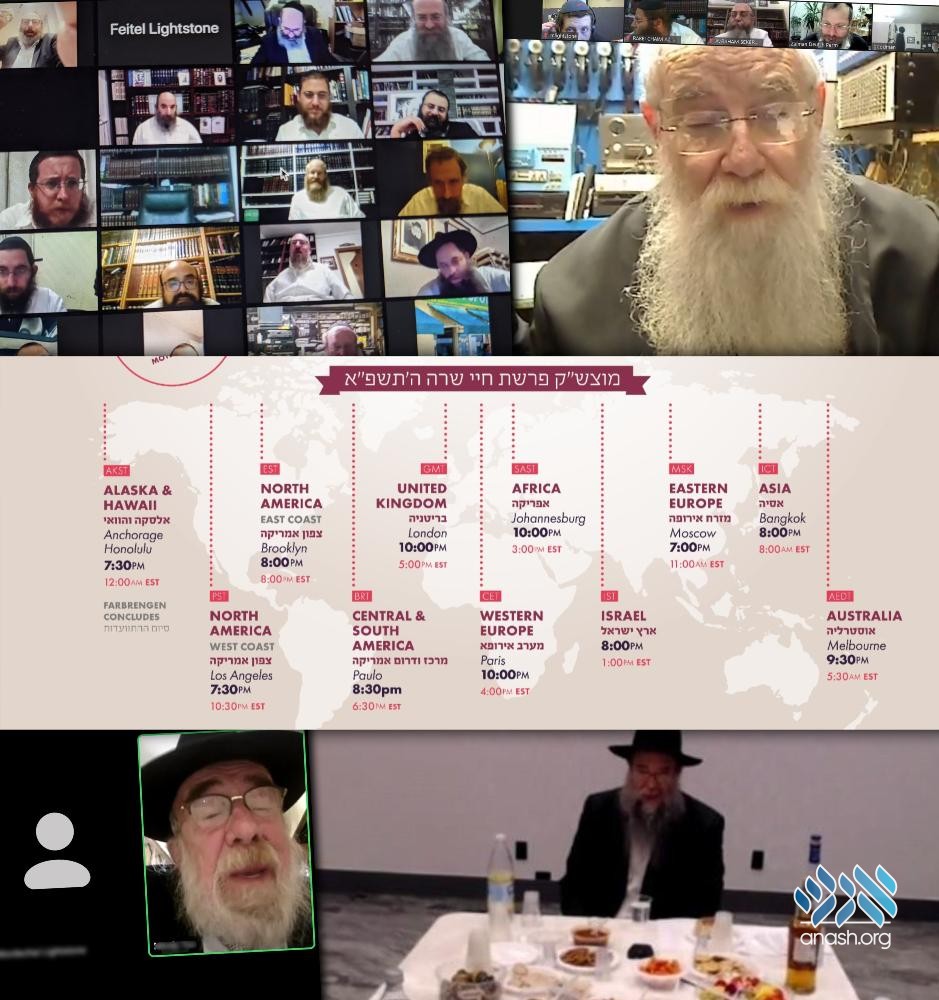 The Kinus Hashluchim Motzei Shabbos farbrengen, held over Zoom, was only supposed to last one day, yet as it nears three days of continuous conversation and celebration, it still shows no sign of ending any time soon.

It was a Zoom call that was only supposed to last one day, yet as it nears three days of continuous conversation and celebration, it still shows no sign of ending any time soon.

In May, a popular New Zealand radio show attempted to host the world’s longest Zoom, clocking in at 23 hours and 39 minutes—just shy of their 24 hour goal. This rabbinic Zoom gathering has long surpassed that, and as it enters its third day, the conversation morphed from English to Hebrew and Yiddish then back to English—peppered throughout with Russian, French, Spanish and Portuguese—with anywhere between 200 to 1,000 rabbis on it at any given moment. At periods when logins on the call were at capacity, an overflow broadcast was pushed to Vimeo for participants to watch.

Conceived as a virtual Melaveh Malka, the traditional communal meal held at the close of Shabbat, the Zoom call is part of a series of events for the International Conference of Chabad-Lubavitch Emissaries that took place starting Thursday, November 12th.

Due to the ongoing coronavirus pandemic, for the first time in its 37-year history, the conference was held entirely online. With 5,000 rabbis tuning in from more than 100 countries with time zones as many as 22 hours apart, organizing live programming throughout the weekend was met with innovative solutions—melding internet broadcasts, chat, and small, in-person gatherings.

The Zoom call, taking the place of the regular melaveh malka farbrengen gathering that takes place at the outset of Shabbat in New York on any other year began after Shabbat ended at 9:30 p.m. in Melbourne, Australia, and continued with Chabad emissaries tuning in to speakers from Melbourne, Bangkok, Moscow, Jerusalem, Johannesburg, Paris, London, S. Paulo, Brooklyn, Los Angeles, and Anchorage, culminating with the end of Shabbat in Hawaii, when the Chabad emissary in Honolulu was finally able to log on, well over 24 hours later.

As the Zoom continued, well after Shabbat had ended in Hawaii, and into the next afternoon in Australia, the spirit of the call became increasingly eclectic, taking on the form of a rolling chassidic farbrengen, informal conversations conducted between Chassidim mixing words of Torah, stories and personal encouragement while sharing song, food and the occasional l’chaim.

While the annual conference regularly features popular workshops, networking opportunities and a gala banquet, it is the informal gatherings that serve as the spiritual anchor for many of the participants. Hailing from places as far flung as Perm, Russia; North Cyprus; Chicago, Ill; and Santa Fe, N.M., these gatherings form a key part in strengthening their resolve in their communal work. This year, with the sense of isolation from socially distancing accentuating the experience, the popularity of the Zoom propelled it to continue ever longer.

Rabbis shared memories of personal and familial encounters with the Rebbe, inspiring passages from Chassidic discourses and highlights and oral history from past conferences. Songs, a challenge on Zoom due to the lag between users, took place in a semi-chaotic round, with voices from Oslo, Paris and Portland landing in succession like waves on a beach.

Referencing the Talmudic dictum, Pesachim 87b, that “Holy One, Blessed be He, did a kindness to the Jewish people, by dispersing them amongst the nations of the world,” Rabbi Bentzion Butman, co-director of Chabad Jewish Center in Phnom Penh, Cambodia, noted that the ongoing nature of the zoom, much like the miracle of Chanukah, was something that, while meant to last just one day, could continue well past even eight days of farbrengen, extending the normally four day Conference well past its normal end.

“There are Chabad emissaries in almost every time zone, we can continue this conversation – to find inspiration, and share it with others, going forward!”