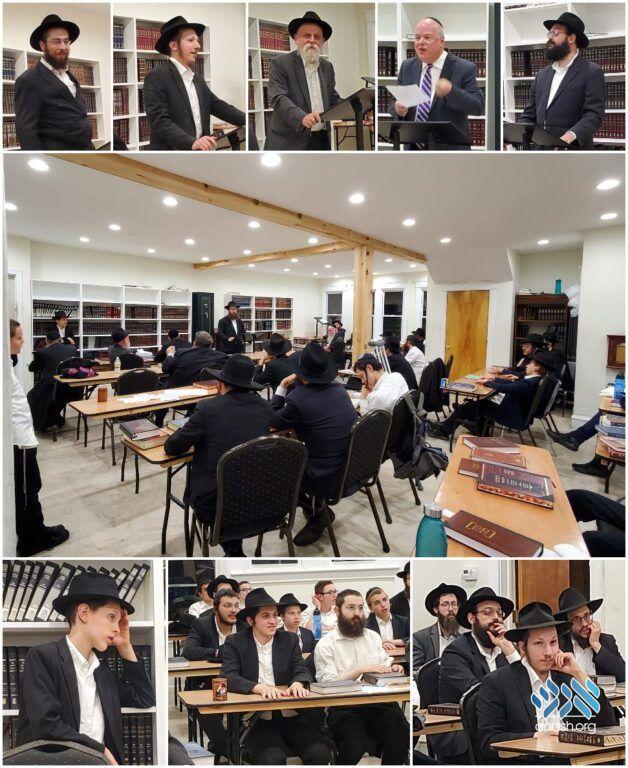 A crowd of Anash and bochurim of the Kingston PA community gathered at the Mesivta for a Kinus Torah led by staff, local rabbonim, and community members.

A large crowd of Anash and bochurim came out on Isru Chag for a Kinus Torah at the Mesivta of Kingston PA. The kinus, the first of its kind in Kingston, was opened by Rosh Yeshiva Rabbi Shimon Hellinger who invited the speakers to share divrei Torah.

The first to speak was Rabbi Menachem Aizenman, Rosh Yeshiva at the Poconos Yeshiva, who enlightened the crowd with a discussion about the wisdom of Moshiach according to the Rambam and his source for writing that he will be greater than Shlomo Hamelech. He shared Torah and memories of Harav Nata Greenblatt who passed away recently.

The Rebbe’s shliach of 50 years to Kingston-Wilkes Barre, Rabbi Tzvi Perlman, inspired those gathered in commitment to Torah learning.

Mashpia in Mesivta, Rabbi Yehudah Leib Aronson, provided a novel halachic explanation for the Minhag Chabad in growing only a part of the peyos until the end of the ear. He explained that this was based on a combination of the Rambam’s position regarding the area of the peyos and the length according to the Arizal.

The crowd enjoyed the variety of speakers and left enlightened and uplifted.