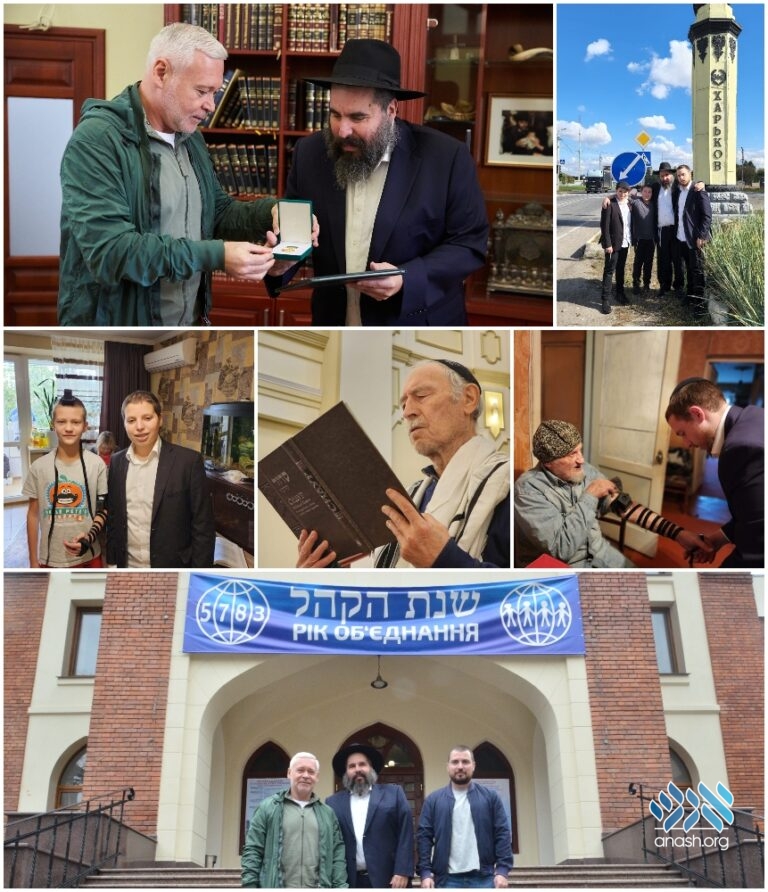 Shortly before an emotional and historic Rosh Hashana in Kharkov, Ukraine, the city’s mayor presented an award to shliach Rabbi Moshe Moskovitz for “his many years of religious service.”

Rosh Hashana 5783 in Kharkov will definitely go down in history.

Seven months of war have taken its toll on the city which is the second largest in Ukraine and only 40km from the Russian border. But the Kharkov Jewish Community has throughout ensured that the thousands of Jews remaining in the city have all their needs physically and spiritually. The year of Hakhel has started in Kharkov in full force with hope and prayers that this year will bring peace and Redemption.

Thousands of packages were given out before Yom Tov and shluchim Rabbi Moshe and Miriam Moskovitz, along with their children, managed to put up mezuzos in homes and put on tefillin with many people for the first time in their lives before the new year set in.

At one stop, they visited Aizik, who lives alone and since the outbreak of covid hasn’t left his home. He was so excited to be able to sit down with the shluchim’s children and talk of his war experiences, sing with them and to be able to kiss the new mezuza which will guard his home.

As Yom Tov began, Rebbetzin Moskovitz light candles in the basement of the synagogue with the women and girls who have been living there since the beginning of the war. Eighteen-year-old Asya has no windows and doors in her apartment in Saltovka and as she closed her eyes with her mother and grandmother she joined in prayer that this year they should be able to return to their home in peace.

On Rosh Hashana evening, after dipping the apple in honey, ninety-year-old Misha, who has been coming to the synagogue every day since the war began, started to sing loudly and the crowd joined him in song ’Nyet nyet nikavo -we are not scared of anyone – only G-d himself”.

Over 350 people- men, women and children came together to hear the shofar and to pray for a good and peaceful year. Avinu Malkeinu…Our Father, our King, open the gates of heaven to our prayer!”

Despite the sirens and the threat of missiles and bombs – the shul was full. Emotional hugs and tears were aplenty as community members shared their happiness to see the shluchim celebrating with them.

One emotional meeting was for Maya, who had come to the synagogue for the first time three months ago to get humanitarian help and the secretary encouraged her to join the zoom Kollel women’s shiur. Every Thursday over 50 women from Kharkov, now spread all over the world, learn together the weekly Parsha with Miriam Moskovitz and at the end of the class share their challenges. One woman has no home, the other no roof, another has a son serving in the army and another is in Israel worried for her husband still in Ukraine. Maya couldn’t believe her eyes when just a  few minutes before the Shofar blowing she meets for the first time the ‘teacher from behind the screen’! Hopefully, this Thursday Maya will join all those in Kharkov for a live class.

The shluchim didn’t rest after davening either. They continued from house to house, making sure eery Yid in Kharkov would hear shofar. In one house, Vadik and Inna couldn’t believe their eyes when half an hour before sunset they heard loud knocking on their door and saw Rabbi Moskovitz with a shofar. They stood in tears together with their elderly mother Mila as the sounds of the shofar brought them hope for better times.

Prior to Rosh Hashana, the mayor of Kharkiv, Igor Terechov awarded Rabbi Moshe Moskovitz, the Chief Rabbi of Kharkov, with a medal and certificate of honor. The mayor came to the synagogue to personally give over his thanks despite his busy schedule.

The award was from the city of Kharkov “to Rabbi Moshe Moskovitz for his many years of religious service and significant contribution to the spiritual revival of the nation and upkeeping peace in our society and for providing humanitarian aid to the people of Kharkov in these war times.”

Rabbi Moskovitz in turn presented the mayor with a beautiful shofar symbolizing redemption. “May Kharkov only hear the sounds of the shofar and not the sirens of incoming rockets! This year is a special year “Hakhel’ – a year of unity! May this year bring true peace and unity for Kharkov and the whole world,” he warmly wished the mayor.

Nella Kazanzhieva, the head of the Kyiv district administration in Kharkov also came to congratulate the community for the new year. Her district has been one of the hardest hit and she fondly remembers coming to celebrate the milestones of the Jewish school and gave her thanks to the Moskovitzs for being in Kharkov in these difficult times.