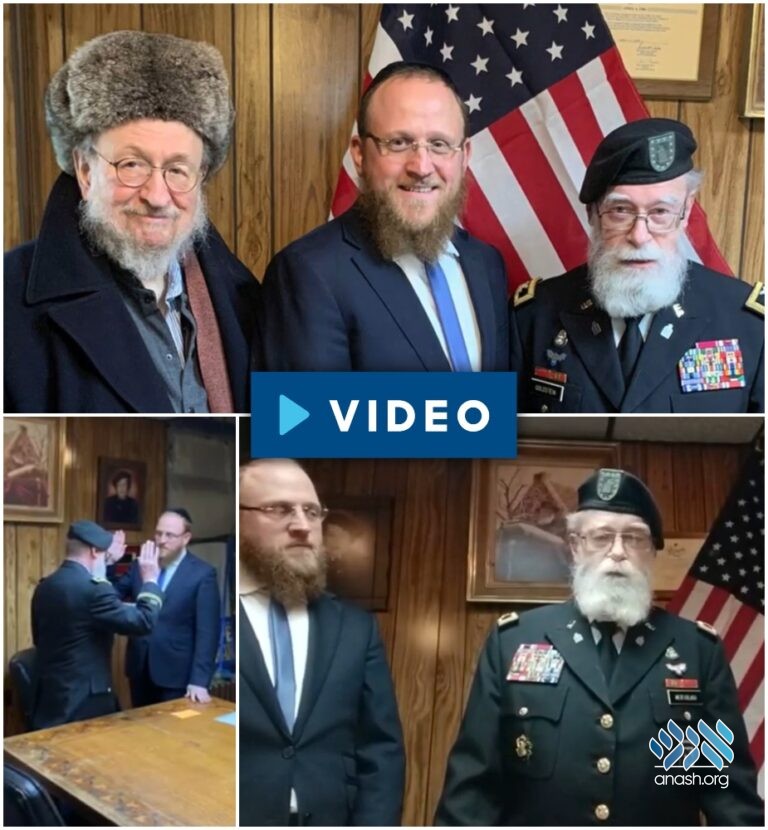 In a special ceremony at NCFJE headquarters, Rabbi Mordechai Z. Hecht took the oath of office to become a US Air Force chaplain, administered by Chaplain Jacob Goldstein, who said that the ceremony was a closing of a circle for him personally.

In a unique but modest ceremony at NCFJE headquarters in Crown Heights, Key Gardens Shliach Rabbi Mordechai Z. Hecht took the oath of office to become a chaplain of the United States Air Force Reserves.

Born into a family with two generations of rabbis on his father’s side, and six generations on his mother’s, Rabbi Hecht has served as the shliach to Anshe Sholom Chabad JCC in Kew Gardens, Queens for the past 18 years. He recently began studying to become a chaplain, seeing it as another way to spread Yiddishkeit to an additional segment of the population.

The swearing-in ceremony, taken at the end of the studies and preparations, took place this past week in an intimate ceremony attended by a small number of family and friends.

“It is with great, healthy and holy pride that we announce a very special congratulations to our Rabbi on his becoming a Chaplain in the United States Air Force Reserves, following in the footsteps of great Rabbis before him,” the Board of Trustees of Anshe Sholom Chabad JCC wrote. “Rabbi Mordechai Hecht has been preparing for this days for years and please God will be dedicating “part” of his life to our Armed forces.”

Administrating the oath was Chaplain Jacob Goldstein, who served with distinction as the highest-ranking Jewish chaplain for nearly four decades.

Chaplain Goldstein said that besides for the simcha of welcoming every new Jewish chaplain, this particular ceremony was a closing of a circle for him personally. He explained that when he was going into the army, Rabbi J.J. Hecht has helped him obtain an exemption to keep his beard, and here he was helping his grandson become a chaplain.

Rabbi Hecht also spoke, sharing that he chose to become a chaplain in honor of his grandfather Rabbi Shneur Chaim Hakohen Gutnick, who served as a chaplain in the Australian Defence Force alongside his work as a shliach and Chief Rabbi in Melbourne and Sydney, Australia.