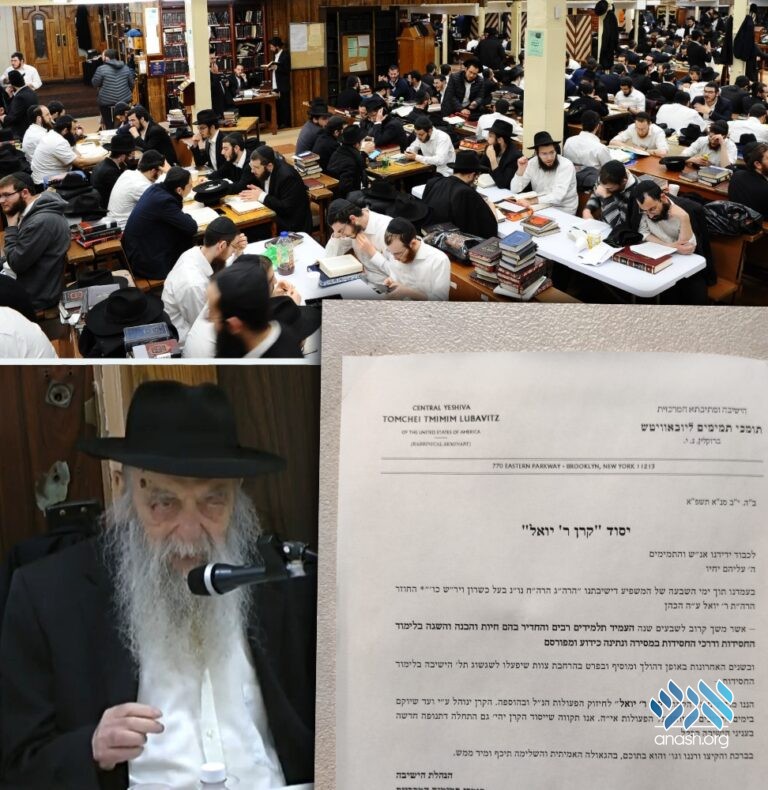 The administration of 770 yeshiva, where Reb Yoel Kahn served as a mashpia for decades, announced the founding of ‘Keren Reb Yoel’ – a fund to continue his recent work to strengthen the study of Chassidus in the yeshiva.

A new fund established by the hanhala of the 770 yeshiva will be earmarked to continue the efforts begun by legendary mashpia Reb Yoel Kahn to strengthen the study of Chassidus among the bochurim.

For close to seventy years, Reb Yoel served as a mashpia in Tomchei Tmimim, first at the yeshiva located at Bedford and Dean, and later as the head mashpia in the yeshiva at 770, a role he served in for decades.

Even with Reb Yoel’s tremendous responsibilities, serving as the Rebbe’s chief chozer and maniach, and delivering shiurim to tens of thousands around the world, he never stopped giving shiurim to the young bochurim who had come to spend a year in 770. Depending on the year, he would deliver one, two or even three shiurim a week for the bochurim, besides for holding farbrengens and inviting them to Shabbos meals in his home.

In recent years, Reb Yoel, concerned about the state of the study of Chasssidus in 770, began setting in place a number of moves that would strengthen the bochurim in their learning. He personally arranged for the yeshiva to hire three new staff members, Rabbi Meir Shlomo Kaplan, Rabbi Shmuli Avtzon, and Rabbi Yisroel Noach Raichik, and he would fundraise to pay for the additional expenses incurred to the yeshiva.

Following his passing, the hanhala of 770 yeshiva created a new fund to continue his work and strengthen the learning of Chassidus among the bochurim. Besides for covering the costs that Reb Yoel had covered until his passing, the yeshiva hopes to use the funds to hire new mashpi’im and implement programs to bolster the study of Chassidus.

“Reb Yoel dedicated so much of his time and energy so that bochurim should have a koch in learning Chassidus,” one hanhala member told Anash.org. “It is only fitting that the yeshiva ensures that his work continues.”

The fund, which will be called ‘Keren Reb Yoel’, was established during the days of shiva. Details of the individuals who will stand at its helm, as well as the project the fund will begin with, will be announced in the coming days.