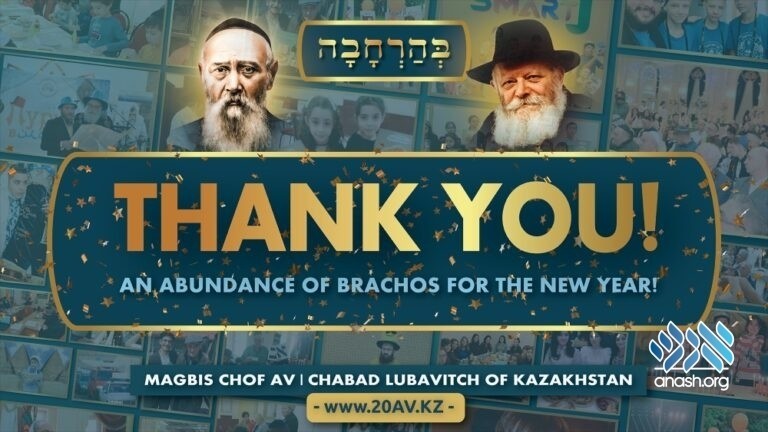 The annual Chof Av campaign for Chabad of Kazakhstan was a smashing success, with chassidim participating from around the world to support Jewish life in Kazakhstan continuing the work of R’ Levi Yitzchok. A raffle for two tickets to Almaty will be taking place.

The annual Chof Av campaign held by Chabad of Kazakhstan in memory of the Rebbe’s father was met with a historic success, with over 3,357 donors donating $773,866, and counting.

Every year, on the yahrzeit of the gaon and mekubal Harav Levi Yitzchok Schnnerson, father of the Rebbe, Chabad of Kazakhstan holds a campaign to help continue his holy work of spreading Yiddishkeit in the country and to help them upkeep his holy tziyun throughout the year.

This year as well, the campaign gave chassidim around the world the chance to take part in the legacy of Reb Levi Yitzchok and help the shluchim grow their activities across the country.

Rabbi Yeshaya Cohen, Chief Rabbi and Head Shliach of Kazakhstan, says that he gets emotional every year anew upon seeing how chassidim eagerly mobilize for the sake of Yiddishkeit in the country.

“It is touching to see how thousands of Yidden from all walks of life join forces for the Yidden of Kazakhstan, the country where Reb Levi Yitzchok was exiled to,” he says. “I have no doubt that the honor to his father brings a tremendous nachas to the Rebbe.”

“I would like to take the opportunity to thank all the donors, and to those who ran the campaign, working day and night to ensure that it would be successful,” he said.

The results of the campaign are felt year-round. In the very same country where Yidden tried to hide their existence just a few decades ago, today they proudly participate in shiurim, Shabbos meals and Jewish programs. Shluchim across the country are constantly expanding their programs, allowing more and more Yidden to connect to their source, as is fit for a country that the Rebbe personally cared about.

Rabbi Yeshaya Cohen says that the shluchim’s driving force in the far-away country lies in a story of the Rebbe from over five decades ago. “A shliach once asked the Rebbe permission to name a certain institution after his father, Reb Levi Yitzchok. The Rebbe agreed, but with one clear condition. The Rebbe said that since by his father, everything had been b’harchava, in abundance, the institution must also be b’harchava!”

“All the more so for us shluchim in the very location where Reb Levi Yitzchok toiled with tears, and in the very place where he is buried, there is no question that we must keep on expanding and growing b’harchava,” Rabbi Cohen says emotionally.

And the ten Chabad centers, spread over seven cities across the country, do just that. This year, thanks to the donors and partners, the shluchim will be expanding their activities even more. They will not rest until they reach every neshama, taking the last steps needed to bring Moshiach.

“From the bottom of our hearts, we extend our thanks to all our partners for their generosity. Every dollar that was donated will help us reach another Jew and kindle the pintele yid inside of them. That merit, along with the merit of the upkeep of the tziyun of Reb Levi Yitzchok, is thanks to each of you,” Rabbi Cohen says.

The names of all donors were mentioned at the holy tziyon on Chof Av. The raffle for the two tickets to Almaty will take place on Wednesday, 28 Av.

The campaign site will remain open until Vov Tishrei, yahrzeit of Rebbetzin Chana, wife of Reb Levi Yitzchok and mother of the Rebbe. The names of all those who donate will be mentioned at the Tziyun.

The campaign was operated by Bracha Torenheim of Flowmotion and hatomim Yeshaya Abba Cohen, and hosted by Raisethon – Rabbi Shloimy Greenwald. The campaign film and live broadcast were ran by Flowmotion Studios.