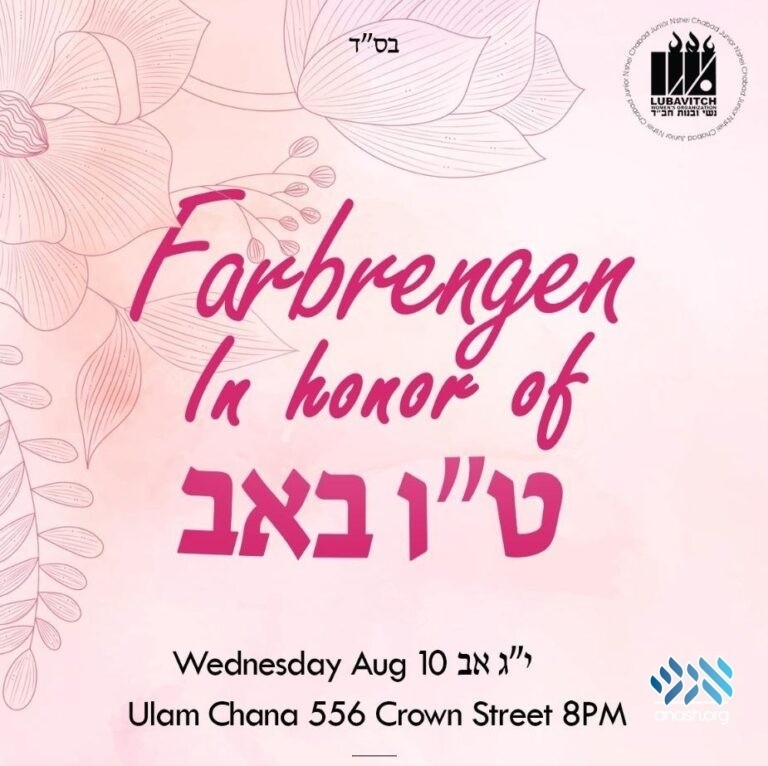 The Junior N’Shei Chabad of Crown Heights will be hosting a Farbrengen in honor of Tu B’Av this Wednesday night, 8/10/22 at Ulam Chana, 556 Crown Street at 8pm for Women and Girls.

On Wednesday, August 10th, the Junior N’Shei will be hosting a Farbrengen In Honor of Tu B’Av. With a lineup that includes musical entertainment, inspirational guest speakers, raffles and refreshments provided by neighborhood vendors and community membersand a total of 13 raffles that will be given away, this is an event not to be missed!

Ulam Chana at 556 Crown Street will be host to the event, where Chaya Mushka Geerman will be master of ceremonies, guiding N’Shei participants through the musical stylings of Esther Bracha and Shaina Goldstein, Surie Levilev and Simi Sebagg, and will be treated to inspirational shirium by Montreal Shliach, Shmuli Zirkind and renown speaker Mrs. Sara Karmely.

The final Mishna of the tractate Taanit tell us, “There was never a day as festive for the Jewish nation as the Fifteenth of the month of Av and Yom Kippur.” Celebrated on the heels of Tisha B’Av which commemorates five historical atrocities to the Yidden, Tu B’Av recalls five simchadik events, two of which occurred in the years of the first and second Beis Hamikdosh.

Tu B’Av is an especially significant holiday for women as it echoes back to the days of the Golden Calf, which the women declined to participate in. The rebbe brings down that as a reward they were given Rosh Chodesh. The Rebbe expands on this and affirms that the lack of participation came from a deeper faith, and the idea of chos v’shalom making an idol was inconceivable.

Rosh Chodesh most assuredly comes every month, representing continuity and perpetuity just like the Jewish Woman. The Junior N’Shei of Crown Heights has the zechus of providing quality Jewish programming to the women of this community.

On Tu B ‘Av especially, we are reminded of the incredible power and potential of the Jewish Woman and how exponentially greater we are when we come together. When we uplift women, we uplift the world. The N’Shei looks forward to seeing you at this year’s A Farbrengen In Honor of Tu B’Av event!