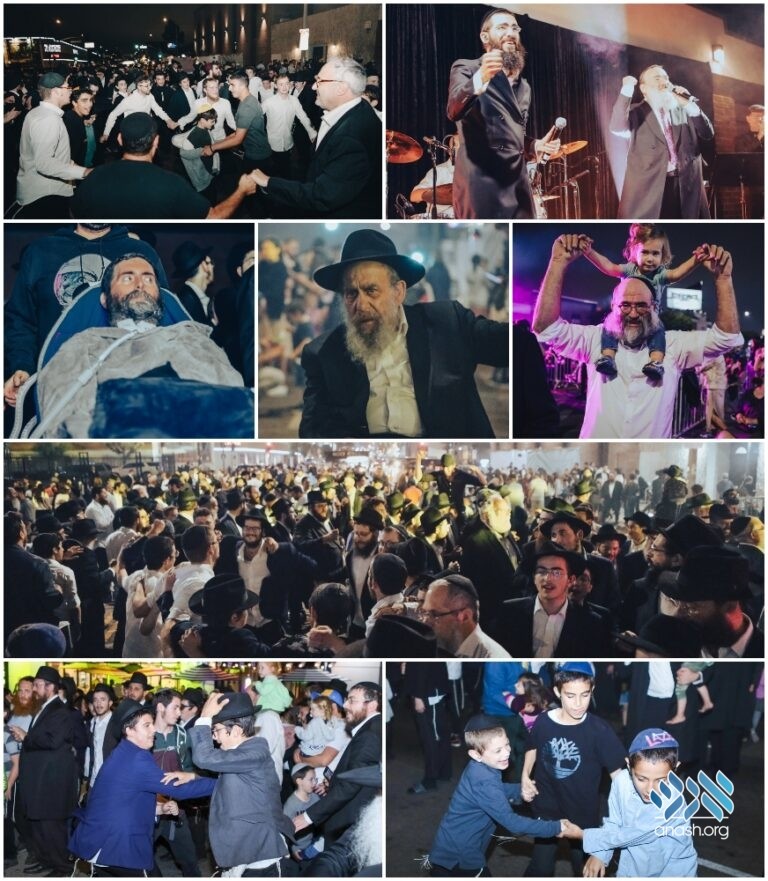 A grand citywide Hakhel and Simchas Beis Hashoeva in Los Angeles marked the siyum amiras hakadish of beloved rov Rabbi Shimon Raichik, who had a special koch in Hakhel.

The Los Angeles Jewish community gathered on Thursday for a citywide Simchas Beis Hashoeva and Hakhel.

The celebration was arranged by the Raichik family to mark the siyum amiras hakadish of Harav Shimon Raichik, who served as the beloved rov of anash in Los Angeles for decades, and passed away 11 months ago on 20 Kislev, 5782.

Rabbi Raichik had a special joy, enthusiasm, and koch in the Rebbe’s Hakhel campaign, and the grand citywide Hakhel was seen as a proper tribute to his decades of dedication to the community.

The street in front of Congregation Levi Yitzchok on La Brea Avenue was closed for the event, and 7 local shuls joined together to sponsor the event.

The event started with a children’s program and entertainment, with food concession stands and a large sukkah spread over La Brea Avenue.

A grand Simchas Beis Hashoeva then followed, with singers Eli Marcus and Shlomo Simcha leading the crowd in joyous song which quickly turned the street into a mass of dancing men and boys, celebrating zman simchaseinu.

The official program was followed by a farbrengen in the sukkah, led by Rabbi Moshe Levin of Bais Bezalel Chabad and Harav Ezra Schochet, rosh yeshiva of Yeshiva Ohr Elchonon Chabad and colleague of Harav Raichik.

“Mivtza Hakhel was very dear to my father a”h, as were many if the Rebbe’s Mivtzoim. He had a special joy and Koch in Hakhel,” Rabbi Yosef Raichik wrote in a public message earlier this month. “In fact, when my sister Mushky got married last Hakhel, my father turned the wedding into a grand Hakhel. He did this with so much enthusiasm. He hired someone to put up screens and got Jem to make 2 special Hakhel clips to show at the wedding. He printed Hakhel booklets to give out, and of course spoke about the wedding theme – Hakhel.”

“Our family has made a Hakhel logo made in honor of my father and the great love he had for Hakhel. We are asking friends, Shluchim and anyone who can, to use this Logo on their Hakhel flyers. This way my father can have a part in all the hundreds of Hakhels, something that will surely bring him much joy.

“If you have not yet planned a Hakhel, consider planning one or more,” he wrote.

VIDEO: At the farbrengen, Rabbi Ezra Schochet related a yechidus he had with the Rebbe