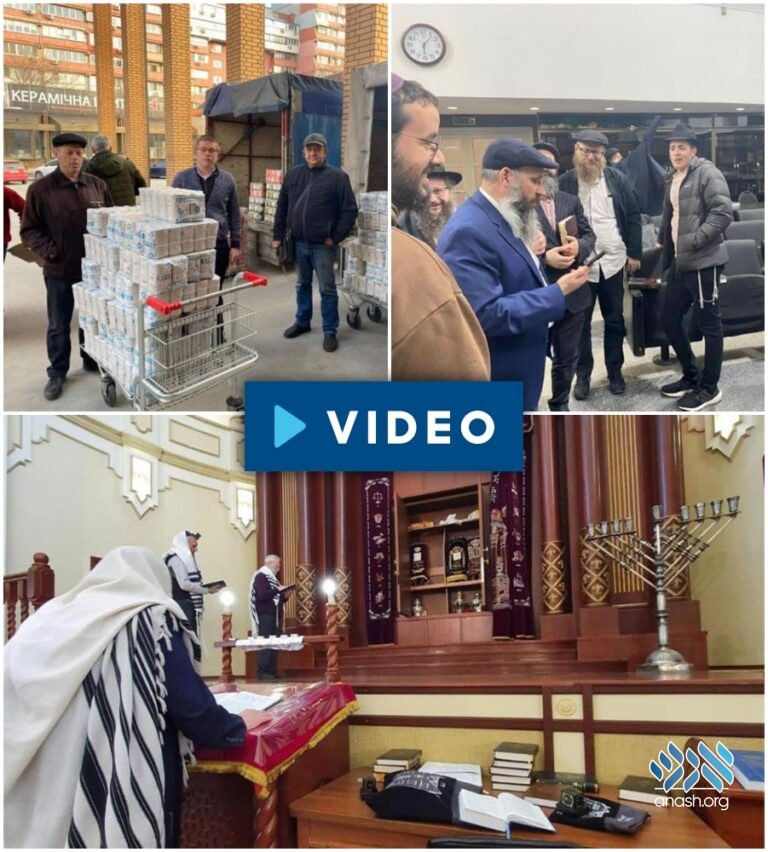 As soon as the Russian invasion of Ukraine commenced, shluchim across the country raced to provide material aid and spiritual comfort wherever they could, while attempting to keep life going as normal as possible.

Despite weeks of buildup, the all-out war that broke out in Ukraine in the early hours of Feb. 24, has brought shock and worry to the entire country, including its 350,000 Jews.

“One second, they’re bombing now!” Miriam Moskovitz exclaimed in a telephone interview with Chabad.org. She and her husband, Rabbi Moshe Moskovitz, direct Chabad-Lubavitch of Kharkov, Ukraine’s second-largest city. “We got a call at 5:30 a.m. from a community member. I asked him ‘Is everything OK?’ and he said ‘No, they’re bombing Kharkov!’”

Moskovitz opened her window and heard the first explosions of artillery and the acrid smell of burning that have become the new reality of life in many places throughout Ukraine.

Shortly afterwards, Rabbi Moskovitz went to the massive, domed Choral Synagogue he leads expecting to pray alone, but found more than 30 men waiting for the services to begin. A 95-year-old regular was there too, and when Moskovitz asked him why he hadn’t remained at home the man answered: “Where else should I be now if not the synagogue?”

Video of morning prayers in the Chabad Choral Synagogue showed the gathered singing “Sheyiboneh Beit Hamikdash,” a prayer for the rebuilding of the Temple in Jerusalem ushering in an era of global peace, amid eerie whistling sound of artillery fire overhead. By the time the Torah was read the mortar fire was even louder.

In the hours since Russia’s massive invasion campaign commenced the Kharkov Jewish Community’s telephones have been ringing off the hook. Foreigners who had remained in the city called for advice, panicked family members from abroad called for word from their loved ones, and locals called about evacuation plans. With roads in danger of aerial bombardment the safest thing to do is stay in place, the rabbi said. The synagogue has been distributing food and care packages all day, and has also become a haven for the dozens of locals who feel safer there than at home.

With a nation-wide curfew of 10 p.m., the streets of Kharkov and cities and towns across the country are quiet and empty aside for the bombings targeting Ukrainian military installations. While people are scared, neither panic nor violence have broken out.

“The mother of one of our students called me today,” says Devorah Leah Levenharts, whose husband, Rabbi Mordechai Levenharts, directs the Simcha School in the capital of Kiev. “She was desperate, begging us to take her daughter to Israel with us. She has nowhere to turn and nowhere to go.”

Levenharts assured the woman that they would indeed look out for her daughter, but she and her family were remaining at home, in Ukraine, with the people the Israeli-born couple has served since 1998.

She reports that the streets of the city are mostly empty, with bottlenecks near the arteries leaving the city and long lines forming at gas stations.

Hunkering down at the school for the night together with family members, she explained that her home, which lacks a bomb shelter and is near the city center, was considered too dangerous.

“People have no experience with this,” continued Levenharts. “There are no shelters, and people don’t know how to act during a war. In 2014, the violence was far from Kiev. Now, it’s everywhere. It’s here.”

“Until yesterday morning no one believed this could actually happen,” said Rabbi Moshe Weber, a Chabad emissary in the eastern city of Dnipro and director of the Kolel Torah learning program throughout the former Soviet Union and Europe. “There was bombing of a military airport this morning but we hear nothing right now because we’re farther from the border. There’s definitely a sense of shock here. So far, people are calm. They’ve been buying up staples in stores and lining up at ATMs, but it’s been very orderly.”

The Menorah Center, the massive seven-tower Chabad Jewish community center that dominates Dnipro’s skyline and is led by Rabbi Shmuel and Chani Kaminezki, remains open, though there were noticeably fewer visitors all day. Nevertheless, morning, afternoon and evening prayers at the Golden Rose synagogue, which stands adjacent and connects to Menorah, drew an active and buoyant crowd.

The biggest problem for both the Jews and general population of Dnipro is the uncertainty. Yes, war has commenced, but how long it will last and what the next step will be are anyone’s guess.

“There’s no panic, but there’s fear, real fear,” says Weber. Fears include everything from future food and medicine scarcity to tanks rolling down their central streets. Already people have been arriving at the Menorah Center to purchase subsidized food or receive free food packages.

Some 600 kilometers west, in Zhitomir, the children of Chabad’s Alumim Center for the Advancement and Welfare of Jewish Children in Western Ukraine were evacuated farther west into the Carpathian mountains. The Alumim orphanage sits on a sprawling campus outside of Zhitomir and just seven years ago itself served as a refugee camp for Jews from the rebel-occupied far eastern regions of Ukraine. It is also located near a Ukrainian military facility and with the aerial bombing attacks on every part of the country, reaching as far as Lviv and Ivan-Frankovsk in the west, it was no longer safe to keep children in the camp.

“We sent about 100 children to the mountains on buses today,” said Rabbi Shlomo Wilhelm, director of Chabad of Zhitomir, under whose auspices Alumim runs. “The roads are difficult, there’s terrible traffic heading in the direction of Poland and Romania, but the children will soon be there. We’re sending another group out first thing tomorrow morning.”

Wilhelm stressed that it was not only the physical safety of the children that was at stake here but also their mental health. “They’re going to the beautiful mountains where there’s fresh air and, we hope, absolute calm, and that’s vital for children, especially the children in our home, during such a difficult time.”

Zhitomir itself is relatively quiet, said Wilhelm. “Thank G‑d people showed up to our Torah class tonight, they feel this is really the most important thing for them.”

Wilhelm noted that the Rebbe sent him and his wife, Ester, and their fellow Chabad emissary couples to Ukraine to be there for its Jews in every circumstance. “That’s what we’re here for. We’re here, we’re here for them, and we’re here with them, and we pray for good news.”

Chabad emissaries have reported similarly from cities throughout Ukraine including the capital of Kiev, from Odessa on the shore—which is getting pounded hard from the sea—and Sumy, a small city close to the Russian border.

“Thank G‑d we’re holding on here,” said Rabbi Yechiel Shlomo Levitansky, who directs Chabad of Sumy together with his wife, Rochi. “So far it’s really been calm, despite how close we are to the border and the action, and we’ve been stressing that everyone remain calm. Panic and rumors don’t help anything, so we need to just continue doing our job for the Jews and all the people of the area.”

The Moskovitzes, in Kharkov, said they and their community were touched by the outpouring of support they’ve seen from around the world. “It’s been like a huge hug from the entire Jewish people,” said Miriam.

“The most important thing at this time,” added her husband as they headed into their basement amid a renewed round of bombing, “is for people to not think they can’t help us here. They can. Every person can do something. Say a chapter of psalms, put on tefillin, give charity, put up a mezuzah. Do a good deed in the merit of the Jews of Ukraine, because that’s what can bring about a miracle.

“And what we need here is a miracle.”