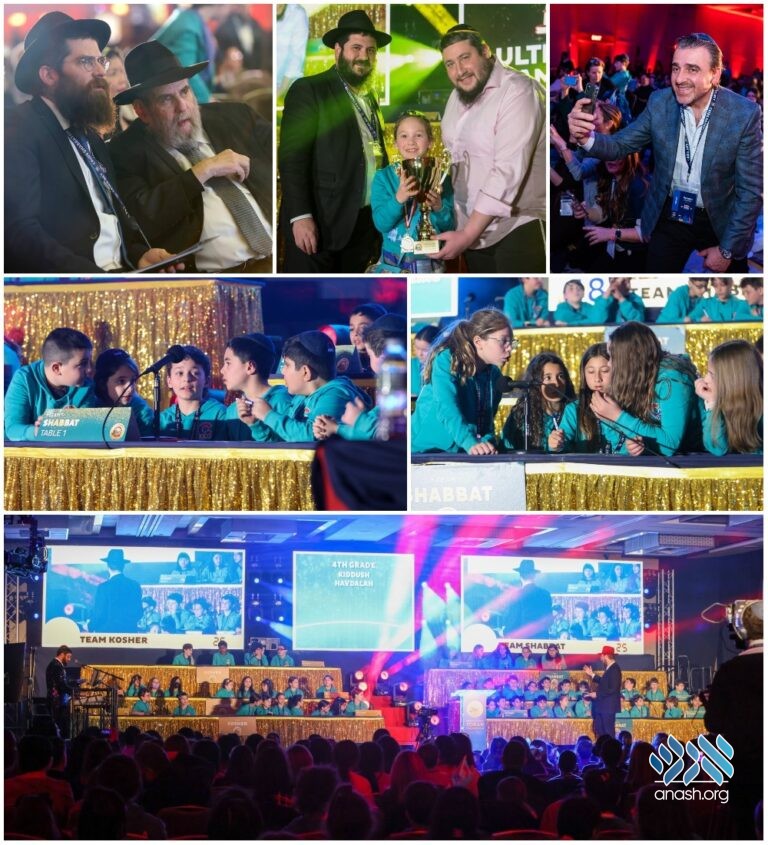 110 Hebrew School kids competed onstage at a live game show, the culmination of a highly-anticipated Shabbaton attended by both parents and children.

These kids learned about their Jewish heritage. They studied the material over and over again in their free time. They took tests and passed with flying colors. And now, after competing live onstage at the JewQ International Torah Competition, they are honored with the title of JewQ Ultimate Champion!

“We couldn’t be more proud of every champion,” says Rabbi Zalmy Loewenthal, CKids director, “but these winners pushed through until the final moments.”

Yesterday’s final game show was the culmination of the highly-anticipated JewQ Shabbaton attended by both parents and children. The weekend was full of exciting trips, meaningful meals, and a special program just for parents.

The game show, held at the ballroom of the Hyatt Regency in Princeton, New Jersey, featured a decked-out stage where 110 Hebrew School kids competed live to represent their schools in front of hundreds of people in the audience and thousands watching online. Master of Ceremonies Yehoshua Lustig kept the event moving, while singer Rabbi Shmuel Marcus kept the audience entertained and inspired throughout. “My children worked so hard to get here, and they had an incredible time,” says a parent of three JewQ Champions from Scottsdale, AZ. “They are so proud of their medals.”

“List the 13 beliefs fundamental to the Jewish people.” Kids raced against the clock to answer questions that measured how well they mastered all the information from their Living Jewish textbooks. The highly competitive atmosphere kept the judges on their toes the entire event—Judge Ruchie Freier, Professor Eve Krakowski, and Mrs. Mushky Loewenthal.

When the Ultimate JewQ champions were announced, the crowd erupted in applause. Rabbi Mendy Kotlarsky, Executive Director of Merkos 302, announced the champions, the kids who got the highest scores out of thousands of other kids who studied. “How special to watch the CKids revolution,” he said, before announcing the names.