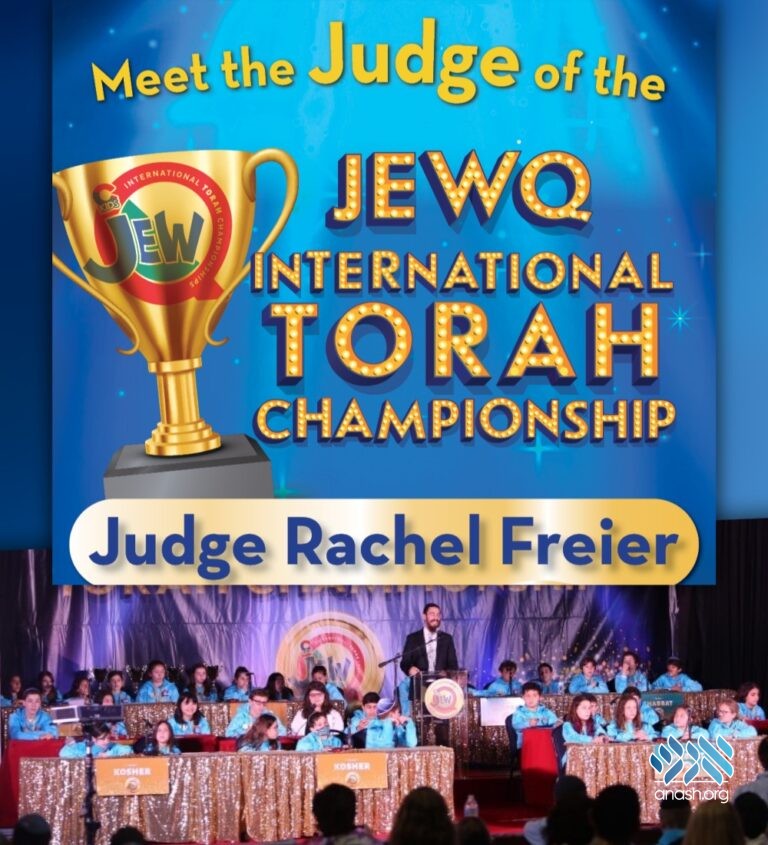 After months of studying, the JewQ final championship is the time for Hebrew School kids from around the world to showcase their Jewish knowledge. They’ll compete on stage using their proficiency in topics like Jewish holidays, Jewish heroes, the Twelve Pesukim, Brachos, and Basic Prayers. And this year, one of the judges presiding over the live showdown will be none other than Judge Ruchie Frier.

Ruchie Frier is a New York City Criminal Court Judge in charge of sentences and bail amounts for people who’ve committed misdemeanors throughout the five boroughs. Since winning the election to her position last November, she’s been proudly keeping Torah and mitzvos—including davening every day before work. “I ask Hashem for the wisdom to make the right decisions,” she says.

At this year’s highly-anticipated JewQ championship, taking place at the CKids Shabbaton in March, JewQ is proud to welcome Judge Ruchie Frier to the judge’s panel, where she’ll weigh students’ answers live.

“What an honor to have a real judge evaluating the hard work of these kids,” says Rabbi Mendel Raskin, director of JewQ International at Merkos 302. “Every child up there on stage has been studying for months.”

The annual JewQ international Torah competition from CKids has spans close to 6 months of learning, reviewing, and studying, with champions committing to memory hundreds of facts about living Jewish. With over 2,000 kids part of it, Hebrew schools worldwide have seen JewQ’s impact as a positive learning motivation for their students.

Judging the championship along with Judge Ruchie will be two other judges, soon to be announced. Together, the three notable and capable judges will decide the verdict that thousands of children around the world have been waiting for—who will be the final JewQ champion?

To learn more about the International Torah Competition, visit ckids.net/jewq.